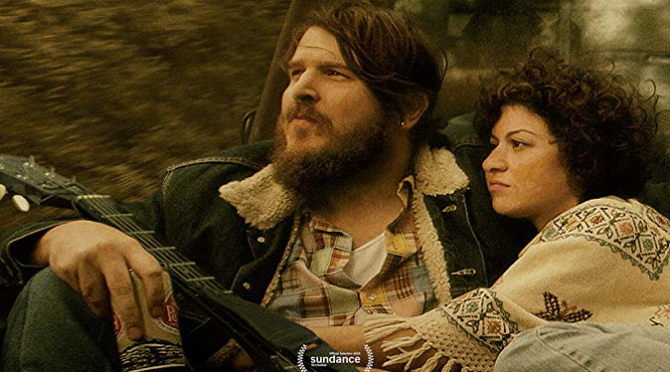 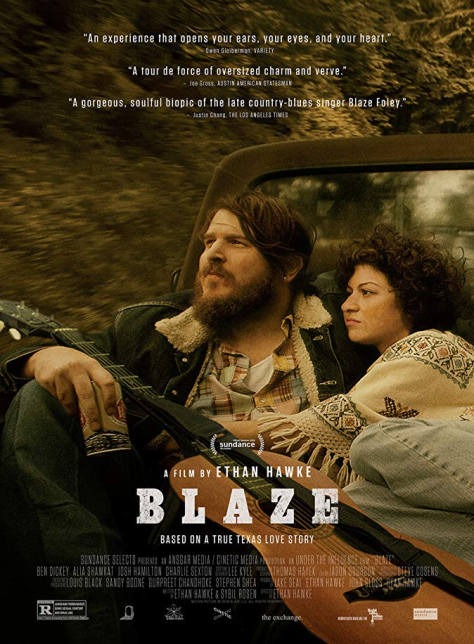 The tragedy of the Bard is a tale as old as time. The lonesome wanderer that walks the world finding purpose in the bottom of a bottle, the eyes of a lover, and the tune of a guitar. While it may be familiar, we continually revisit this narrative because it feels romantically human, and in my mind ‘romantically human’ is the perfect way to sum up Blaze. The same tropes you may expect to find in films like ‪Crazy Heart‬ and ‪Inside Llewyn Davis‬ are alive and well inside Blaze, but the difference is in how director, Ethan Hawke, carefully edges his story into a visual poem that often allows its songs to speak with more specificity than its characters. That’s not to say that Blaze features incoherent characters, it’s merely a comment about how they each resign themselves to a rhythm in language that is not immediately obvious. These are Shakespearean figures who just so happen to be in a movie about nomadic hoodlums struggling to find purpose. In this regard, Blaze is far better than it has any right to be.

Blaze tells the true story of a musician, Blaze Foley, in the prime years of his life as he meets his love and struggles to maintain his identity within the confines of a pervasive industry he is increasingly encouraged to pursue. We see Blaze unfold in three acts spliced within one another intermittently and occasionally without rhyme or reason. There is the story of Blaze and his love, Sybil, as they live their life of solitude in a shack-like treehouse in the woods, the story of Blaze’s final live show in the Outhouse bar in Austin, and the story told to us about Blaze posthumously by his two best friends and collaborators. The assembly allows each of these stories to contribute to one another, but the threads are rarely directly linked in a specified timeline, allowing the film to float through narrators and perspectives as effortlessly as a note in Foley’s music. The compilation of each of the narratives make the film feel less like a structured piece, and more like the experience of remembering a loved one by trying to piece together fragmented moments in time and stumbling upon golden stories and songs left behind. In this way, Blaze feels wholesomely intimate in a way that many musical films have a hard time grasping.

The titular character is as much a mystery to the ones he loved as he is to the audience, yet somehow he feels understandably idyllic and human. Blaze Foley is magnetic from the opening beats of the film. Whether he’s waxing on philosophically behind the microphone, playing songs with the woman he loves, or piss drunk and falling flat on his face, Blaze is shockingly relatable. Blaze could so easily play as a pretentious caricature, but it doesn’t. Instead, Hawke is able to focus on exactly what made him so special despite having such glaring faults. At one point in the film, a character mentions the “two sides to Blaze”. The erratic drunkard juxtaposed with the sensitive artist. Blaze’s greatest strength is how easily these polar opposite sensibilities have been so acutely fleshed out.

What strikes me the most about Blaze is how deeply romantic it is, not just in the sense that the movie is partly a love story, but in the way it’s story seeps through the pores of love. The warm textures of the coloration allow Blaze to feel like a careful embrace from the titular character. The way Hawke drenches every song in a profoundly felt honesty makes certain that Blaze doesn’t just feel like an ode to a forgotten legend, it feels like an ode to the love of art. And it’s that same love that tragically brought Foley to his breaking point. In every scene, he fights to regain the same beautiful inspiration he often found in the woods with the love of his life, and as the movie wears on, he slowly loses his ability to find it. Blaze isn’t the usual story of a singer succumbing to his vices. It’s a story of a bard who was never meant for the life of an artist.

Let’s speak more specifically about what you can appreciate about Blaze without digging too deep into the symbolic filters that permeate through the film. Ben Dickey in the role of the titular character gives one of the most transfixing performances I have had the pleasure of seeing this past year. The cadence of Foley’s speech, the explosive energy flexing beneath the surface of his relatively delicate demeanor, and his understanding of Blaze’s casual prophetic phrasing all adds up to make Dickey’s performance nothing short of exceptional. It’s the kind of performance that tears your mind into two layers of thinking: I want to now see him in every movie, and I want to never see him in a film ever again. The former because Dickey clearly has an exceptional talent in regards to acting. The latter because Dickey’s work here is so exceptional that it feels like lightning in a bottle that deserves to be contained and never again reopened for fear of losing the magic. Dickey is also blessed with a talented supporting cast with Alia Shawkat, Charlie Sexton, and Josh Hamilton. Even cameos from Richard Linklater, Sam Rockwell, and Steve Zahn are fun (albeit odd – more on that later) compliments. But this is Blaze’s story through and through. And whenever Dickey leaves the screen, you can’t help but to miss him.

Hawke also (unsurprisingly) proves himself to be a beautifully poetic storyteller. The visual language of Blaze feels so enriched with serene mysticism. As I noted before, Blaze makes great use of its warm textures and colors, often giving the feeling that it exists in a back alley bar with a performer onstage that feels too good to be there. But take note of the poignant moments that Hawke decides to strip those textures away to knife his audience with a tragic reversal. Credit should also go to cinematographer Steve Cosens who contributes to the film’s treehouse essence with just the right amount of lens flares to make you feel like you are truly in the room witnessing a moment or the magic of a song.

As I have also stated before, Blaze’s storytelling techniques are abstract enough to make the film exceptionally compelling, but in some regards, it’s also the film’s greatest weakness. The flippant viewpoints of narrators intertwining with less and less rhyme and reason keeps the audience at a distance at times and betrays the general sense of being in the room remembering an old friend. Sometimes, the first-time audience will spend too much time watching Blaze trying to fit together pieces of a puzzle encompassing his life. It’s a rare occurrence, but Blaze’s structure very occasionally grates against itself in this way. Moments like a shot of a man smashing a guitar with intense backlight spliced within a scene give weight to the poetic mysticism of the titular character, but certain aforementioned cameos feel abstractly satirical in a way that almost feels like an out of place joke. Blaze is also disinterested in introductions. Most characters will simply come to exist in the narrative with an established relationship to Blaze that feels unearned. They quickly gain personalities of their own, but it feels worth noting that context is occasionally left by the wayside.

As with any good musical movie, Blaze’s songs enrich the experience of the film in ways that cannot be understated. For a casual audience member, the music will appeal to anyone who enjoys folk country or the brilliance of an artist like ‪Bob Dylan‬. For someone more interested in Foley’s artistry, I cannot recommend listening to this soundtrack enough. Each song bares such significance to the underlying themes within Blaze. The more I hear Dickey’s renditions of ‘Picture Cards’ or ‘Cold, Cold World’, the more I am reminded of my time spent with Foley and his ambitious pursuit of happiness in spite of sanity.

Its unfortunate that I stumbled across this film after creating my ‘Best of 2018’ list. Blaze struck a cord with me in a way that not many films do. While that may not be true for everyone that comes across it, I certainly hope this review emboldens you to view it for yourself. It’s difficult for me to talk about Blaze without rambling or philosophizing on its deeper contextual meanings. To its core, Blaze bares the identity of the drunkard in the bar. His story is palpable, but it falls upon deaf ears. In some bizarre way, the same could be said of the movie itself. Blaze is a story of a musician that you likely don’t yet know. Christian Bale isn’t attached as the star with Oscar worthy prosthetics. The story follows a non linear pattern, and has little resemblance to other plot structures you may be familiar with. And as a result, you may not have yet seen or heard of Blaze. But in this regard, I can think of no better biopic to capture the essence of its titular character. ‪9/10 ‬