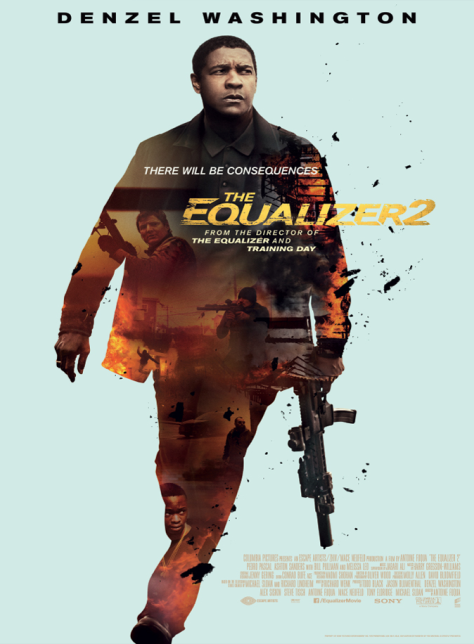 I’m trying to recall the last Denzel Washington movie that actually sucked, a film so devoid of any entertainment value that not even his performance could save it*. Hell, he even made The Taking of Pelham 123 at least watchable.

You’d be hard-pressed to name another current actor who almost always makes movies better just because he’s in them. Case-in-point, Washington’s understated, complex performance as Robert McCall is what elevated 2014’s The Equalizer from an action movie to a great action movie (with considerable help from director Antoine Fuqua). He so effectively made the character his own that we tended to forget it was originally played by Edward Woodward.

Considering its TV origins, it’s only fitting that The Equalizer is the one film Denzel has chosen to make a sequel to. Though the law of diminishing returns certainly applies here, The Equalizer 2 continues McCall’s ongoing mission of righting wrongs with violent retribution. The stakes, however, are more personal this time. One of the few friends who knows he’s still alive, former co-DIA operative Susan Plummer (Melissa Leo), is murdered while investigating the alleged murder-suicide by another agent’s family. After further investigation – and revealing himself to another ex-colleague, Dave York (Pedro Pascal) – McCall learns everyone on his old team are targets, himself now included.

That plot line is actually pretty pedestrian, with an antagonist who isn’t nearly as interesting – or malevolent – as Nicolai Itchenko from the first film. Much more engaging are the numerous subplots where McCall – when not side-gigging as a Lyft driver – provides justice for other people he happens to know. In fact, his relationship with wayward teen Miles (Ashton Sanders) becomes the emotional crux of the entire film (not-to-mention a convenient plot device during the final act). I suspect everyone involved with the film knew these vignettes were superior to the main plot because they comprise a significant portion of the running time.

The Equalizer 2 is not as good as the first one, but Denzel Washington’s performance manages to yet-again elevate a film what would have otherwise been a routine shoot-’em-up. Director Antoine Fuqua keeps the action exciting and bloody, while never forgetting who makes these films worth seeing.

*In this writer’s humble opinion, that movie would be 1990’s Heart Condition.

I was pleasantly surprised with “The Battle of the Sexes” the primary storyline to the movie is the legendary story of Billie Jean King (Stone) and Bobby Riggs (Carell) going head to head in a showdown match between the legendary women’s Tennis player and Tennis hustler and former men’s Tennis player. But there is more to this movie than just a gimmicky event. This is more about Billie Jean King and her personal and professional battles in the early 1970’s.

Society has came along way since 1973 and let’s be honest we still have a long way to go. But back in 1973 the world was a different place. In the Tennis world the men’s games was rewarding their players with 9 times more pay than the women’s who were pulling in the same crowds as the men’s. Unfair? Well obviously. Not just that but the game and its institutional was favouring the men’s game considerably to the point of chauvinism.

Billie Jean King along with her manager Gladys Heldman (Silverman) were at the forefront to change the face of Women’s Tennis forever by breaking away from the WTA and its President Jack Kramer (Pullman). Also in her personal life, she was battling. Struggling to come to terms with her own sexuality, as her friendship with Marilyn Barnett (Andrea Riseborough) developed throughout the tour.

This is where the story succeeds. The match itself although is billed as the climatic finish to the film, I felt her battle with the establishment and her own personal feelings more compelling. The match versus Bobby Riggs was really just the icing on the cake. As a “get it up you” to Kramer and Co.

Emma Stone must be in the top 5 of Hollywood actresses just now. Her portrayal of Billie Jean King is controlled and composed. She never at any point over does the character or the situation. In fact, I felt her portrayal helped me understand the struggle not just for her but for women in general and not just in the Tennis world. Stone gained 15 pounds of muscle for this film and shows her commitment to the role.

Steve Carell I have been a fan of since 2003’s Bruce Almighty as the irritating Evan Baxter and followed this character up with the less successful Evan Almighty. His next role though was the one that caught my eye in 2007’s Dan in Real Life. It showed to me that Carell could act outside his comfort zone and in The Battle of the Sexes I felt he did well as the serial hustler Riggs. As Billie Jean King said Riggs is more of a clown playing to an audience rather than and out and out chauvinist. Don’t get me wrong there are times when he displays a lack of respect in the film and to be honest I wasn’t sure myself whether or not this was part of his act.

The rest of the cast where mostly consistent and really just add to the occasion. Sarah Silverman is great as Heldman. Andrea Riseborough was fine as hairstylist Marilyn Barnett. Disappointingly Bill Pullman’s portrayal of Kramer is a little flat and uninteresting. Predictable you may say.

Credit to Directors Jonathan Dayton and Valerie Faris. What could have been a very run of the mill storyline turned into an interesting drama that flitted back and forth between Billie Jean King versus Bobby Rigg, Billie Jean King’s relationship with Marilyn Barnett and Billie Jean King versus Jack Kramer. The pacing throughout was consistent and was well mapped out. Interestingly I was personally impressed by the inclusion of stock footage of Howard Cosell (Famous Sports Announcer who broke the News of John Lennon’s death on Monday Night Football that dreadful December night back in 1980) using clever CGI wizardry the filmmakers managed to convince the audience that actress Natalie Morales, who played Rosie Casals was being interviewed by Cosell in an almost flawless process. Apparently the most difficult part wasn’t the technical aspects, but getting permission from his estate.

Overall “The Battle of the Sexes” is an interesting film. The look and feel to any historic moment in time is crucial and I feel the makers hit the nail on the head with feel and tone. Stone in particular could be up for an academy award nomination for her portrayal it was that good and the storyline concluded well. If you haven’t viewed this movie yet I can honestly say watch it and you will be entertained. Highly Recommended.