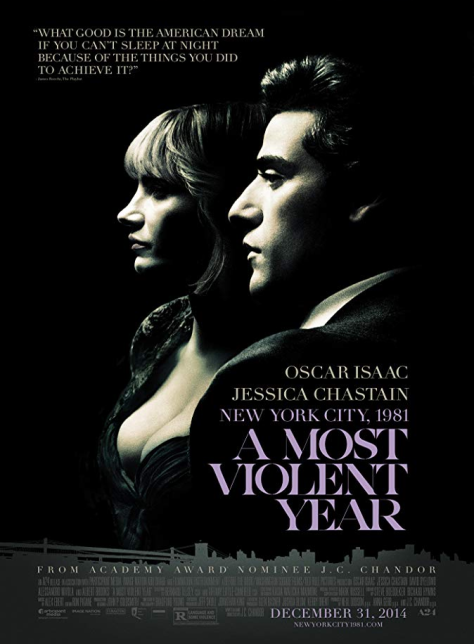 “A Most Violent Year” is set in New York City in the year 1981, were an ambitious immigrant named Abel (Isaac) fights to protect his business and family during the most dangerous year in the city’s history.

Having watched this movie I can only describe this as a captivating drama more than an action film that perhaps the title may suggest to some. I enjoyed Oscar Isaac’s performance as Abel, a family man built on principals, who is provoked into crossing the line a few times by his competitors. Don’t get me wrong the movie doesn’t focus on violence that much and when it does it is justified and not unnecessarily shoehorned into the plot for effect.

The movie’s strength lies in the excellent cast and their performances and interactions throughout the storyline. Almost every shot and scene should be appreciated as the script is intelligent, interesting and gripping to the extent that the audience will be drawn in very easily. Abel’s stance and morals frustrate his wife Anna played by Jessica Chastain who seeks protection from Abel for her and their children in the means of being in the possession of an unlicensed firearm. Chastain’s performance is as equally strong and assertive of that of Isaac and both appear to excel in their shared scenes.

The pacing of “A Most Violent Year” is consistent and the plot is tight. At no point does the story appear choppy or misguided thanks to the films editing by Ron Patane. Director J.C. Chandor did a great job capturing a somber and dramatic tone throughout the movie and creating some tense scenes in there that are memorable also. His writing is also well done and you can sense that he has invested time and care into his characters that are fleshed out and you can relate to.

The cinematography by Bradford Young and Robert Levi (who created the documentary segments) managed to recreate a New York City in 1981 with impressive and convincing results. Added to this a very subdued soundtrack that adds atmosphere to these visuals and the audience is taken back 30 odd years thanks to the music of Alex Ebert.

“A Most Violent Year” perhaps wasn’t going to target a mainstream audience it is fair to say that Chandor has made possibly one of the best dramas of 2014 and should not be overlooked if you enjoy these type of films and cast. Oscar Isaac again has proven there is more to him than Poe Dameron in the new Star Wars Trilogy and flexes his acting abilities once more in the gripping and intriguing movie. “A Most Violent Year” came as a surprise to me and I’m glad I managed to get round to this movie. Highly recommend.