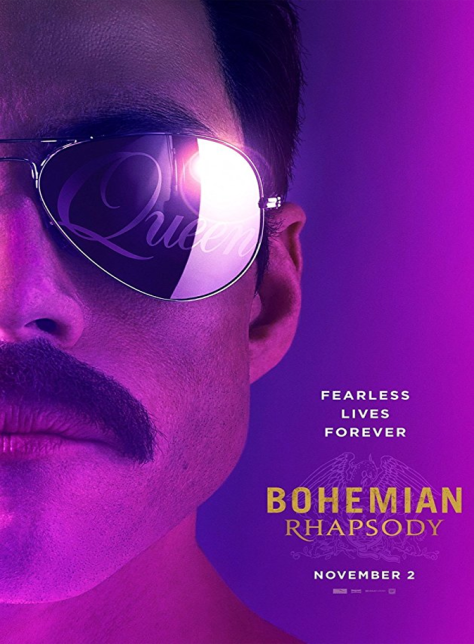 As a die-hard Queen fan during the height of their popularity, I can confirm many of Bohemian Rhapsody’s historical inaccuracies regarding their career trajectory. The timeline of certain events has been changed, while others depicted in the film didn’t actually happen.

I can also attest that Freddie Mercury’s sexuality was never an issue with fans back then. We always suspected he was gay. We just never cared because his over-the-top flamboyancy perfectly enhanced the band’s bombastic, genre-bending approach to music. Even after media wagons began to circle around Mercury’s private life, none of their so-called revelations seemed particularly scandalous because most of us suspected as much all along. When Mercury publicly disclosed he had AIDS (the day before he died), we were extremely saddened, though not all that surprised.

So no, Queen was not an overnight success, not everything they touched turned to gold and Freddie was not diagnosed with AIDS prior to Live Aid. And if the film omits most of the more sordid details of Mercury’s life, so what? It is obvious from the first frame that Bohemian Rhapsody was put together by people who love the band – and its music – as much as everyone else. Accusations of the film glossing-over the truth are moot points. This is not-so-much a biography as it is a big, sparkling thank you letter to Queen and their legions of fans, both old and new.

As such, Bohemian Rhapsody is fabulous fun, much like Queen’s music. Their humble beginnings are superficially outlined – and greatly condensed – in order to present the Queen we know & love as much as possible. The concert sequences are depicted in all their glamorous glory, as are the band’s numerous numerous musical milestones. With a soundtrack that’s wall-to-wall with Queen’s best-known songs, the film plays very much like a greatest hits album. Historically, some of them appear out of order. “Fat Bottomed Girls,” for example, was not one of their early hits. Within the context of the narrative, however, the song’s timing is perfect. As it appears in the story, “Who Wants to Live Forever” achieves a level poignancy never reached in the movie it was originally written for (Highlander).

Much has already been said about Rami Malek’s amazing performance as Freddie Mercury. It is indeed phenomenal, but the actors playing the rest of the band are just as convincing (and criminally overlooked). While they may not be spitting images of their real-life counterparts (though Joe Mazzello as John Deacon comes damn close), they completely embody Queen’s on-stage moves and mannerisms.

Everything culminates with the band’s now-legendary performance at Live Aid. It wasn’t really a “reunion” as the film suggests (Queen never actually broke up), but by rearranging and altering certain events for dramatic impact, this scene is easily Bohemian Rhapsody’s emotional high point. Watching the band return to glory before a 100,000 fans (and a billion TV viewers) is enough to cause goosebumps.

Ultimately, we don’t learn much more about Mercury than we did going in (though he appeared to have a lot of cats). The film is narratively disjointed and its historical accuracy is questionable. But as an affectionate tribute to a band we’ll still be listening to 100 years from now, Bohemian Rhapsody captures Queen the way we’d like to remember them: a great band with one helluva charismatic frontman.

I’m a sucker for a music biopic. As a musician who played in bands for years, I just lap this stuff up. It was Oliver Stone’s amazing biopic that first introduced me to the music of The Doors and it’s a film I still hold in high regard in this genre. These films are easy to get wrong, though, especially when the band get a say in the script. Ray Manzarek openly hated Stone’s biopic of The Doors and how he was depicted, so it’s a fine line you have to tread between telling an accurate story and telling a story that works dramatically on film.

So what do we have in this case? Is this the real life, or is this just fantasy? Well, it’s a little of both. This project has been in development since 2010. Since then it has gone through a lot of different directors and stars, including a very public break-up with Sacha Baron Cohen, whose vision for the film was more about showing the hedonistic life of Freddie Mercury. The remaining band members wanted it to be more about the music so they parted ways.

The director also left the project mid-shoot. Bryan Singer, who is more known for helming superhero movies walked on the project and Dexter Fletcher was called in to finish the film, even though according to union rules he doesn’t get a credit for it.

So it’s been a troubled production to get here, but was it worth it? Well, that very much depends on what you want from this film. If you’re a Queen fan content to see the bands high points re-enacted by a very talented and enthusiastic group of actors, then you’ll probably be happy enough to sit through this with a grin on your face.

However, if you know nothing about Queen or Freddie and are coming to this film to judge it on its cinematic merits, then you may find it lacking. I think this is where you see the remaining band members’ input over the finished article, because there’s none of the dirty laundry that a production without their involvement may have produced and this might’ve given the film more substance. Everything’s just a bit easy in this movie. Freddie meets the band – boom, he’s in! Then they get a record deal, then they do an album and tour which is hugely successful. There’s no struggle. If you were to take this film as the unvarnished truth, it would seem like the band got everything handed to them on a plate and never had a moment of doubt or worry in their lives. The biggest obstacle in this film is trying to convince the record company executive (Mike Myers – look out for the Wayne’s World reference) to release Bohemian Rhapsody as a single. It makes for a feelgood film, but it also makes the film seem a little superficial.

If you’re wondering if this is a Freddie biopic or a Queen biopic, I’d have to say it’s all about Freddie. The other band-members are there, and definitely look the part, but there are never any subplots about what’s going on in any of their lives during this time.

Even though the film does centre on Freddie, it still leaves out a lot of stuff. The racism he had to deal with in the early days is touched on, but he wins over racists in the space of one song and it barely gets another mention. There’s also very little about him concealing his homosexuality. For the most of the film he seems out-and-proud and no one seems bothered by it. I’d like to believe that’s how it was in 1970s Britain, but somehow I doubt it.

The film also fudges the timeline in several places. In the film Freddie tells the band about his diagnosis while they’re rehearsing for Live Aid in July1985, when he actually wasn’t diagnosed until 1987. He also says they haven’t played together for years when they regroup for Live Aid, when they’d actually been on tour from August 1984 to May 1985 promoting their latest album The Works. These things are just moved around to amp up the drama and only a serious Queen nerd would probably know (or care) that they’re wrong, and there are probably many more things that don’t fit the true timeline that others will spot on repeated viewings.

Malek’s performance is gaining almost universal praise, and rightly so. For the first ten minutes you may be thinking ‘that’s not Freddie’ but after a while the line between them disappears. His movements and mannerisms are spot-on, but the film-makers made the wise choice of using the real Freddie’s voice on all the singing scenes. Val Kilmer did a wonderful job of becoming Jim Morrison in The Doors, but Mercury’s vocals were unique and on a whole other level, and I think trying to emulate his voice with another actor or singer would’ve been futile.

The film ends with their show-stopping performance at Live Aid in 1985. The seemless shots moving over a packed Wembley Stadium right up to the stage are impressive and the one section of the film where I saw Bryan Singer’s epic-scale fingerprints, but it really works. The recreation of that performance, with the original audio, gave me chills.

So if you’re looking for some escapist fun with some great music that doesn’t delve too deeply into the seedier side of things, then this film will probably satisfy you, and it may even encourage you to seek out one of the many documentaries on the band if you want to fill in the blanks.