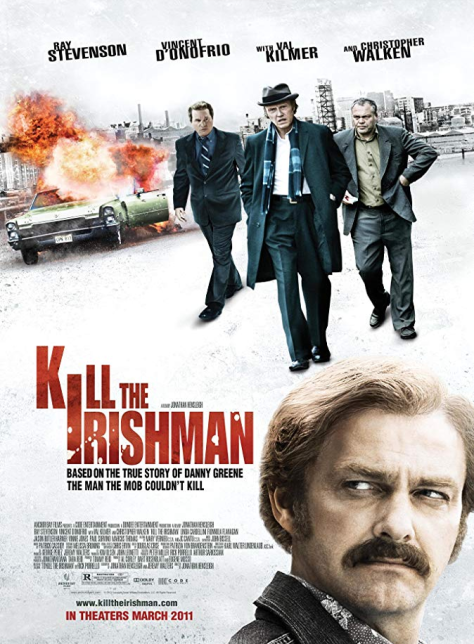 Kill the Irishman is based on the life of Irish American gangster Danny Greene who is a gangster from Cleveland whose story explains the hardships that certain people and in Danny’s case The Irishman go through to make ends meet. Although not all of them are legal ways, but sometimes these seem to be the only way out for some of them. Greene doesn’t show fear, he keeps himself believing his intent is to be a modern day Robin Hood for the community.

The movie opens with Danny in the mid 1970’s driving his car when all of a sudden the car radio is sparking. Greene’s reaction and getting out the car quickly whilst it’s in motion and managing to escape before the car explodes shows the audience very quickly that he is a marked man by the authorities? The Mafia?

Danny Greene was asked by a news reporter How  he survive all of these assassination attempts? With Greene replying “ I’m a Irish Catholic with the grace of God.”

I thought Ray Stevenson did a credible job as Green. Playing him in a tough but smart and experienced way. He worked well with the supporting cast around him and I felt every scene he had the chemistry with his closest allies and showed the tension in the presence of his enemies.

Vincent D’Onforio is great as the conflicted John Nardi who introduces Green into the underworld of the city and reveals how the “Union” works. Nardi appears to work hard at his “trade” and shows a respect for Greene that perhaps Nardi’s bosses don’t understand or even want to understand as they appear to regard Danny Greene as an outsider and not to be trusted.

Surprisingly Val Kilmer’s role as a police officer who grew up with Greene is very subdued and there appears to be a love / hate relationship between both characters that Kilmer carries off with the right tone and balance. Kilmer although does appear in some key scenes is perhaps a little underused, but in saying that Hensleigh probably deserves credit not shoehorning Kilmer in just for the sake of it and the same can be said about Christopher Walken who is barely visible as Shonder Burns.

There is also a small role for former footballer turned actor Vinnie “Lock, Stock and Two Smoking Barrels” Jones as one of Greene’s Irish compadres. To be fair Jones hasn’t a lot to do in the movie and perhaps should have been practising his Irish accent a little more in between takes.

I felt Jonathan Hensleigh who directed and co wrote the screenplay was aiming to show the characters progression from a very lofty gentle speaking intelligent man to a vicious lout with a temper within the duration of the film and to be honest I think he managed it well without the character changing his personality instantaneous.

As for the cinematography I felt “Kill the Irishman” is slightly let down with low production value as a lot of the special effects shots looked…..well they looked like special effects shots you would download from the App Store. The film also uses inter sliced and incorporated actual footage from newscasts covering Greene’s life as a local legend giving it that authentic documentary feel to it.

If you enjoy rooting for the bad guy then you will enjoy this from start to finish.
Greene’s no holds barred approach and attitude kept his character interesting when the story seemed to dip and perhaps becoming a little predictable.

The supporting cast of strong veterans like Val Kilmer and Vincent D’Onofrio help you understand the character of Greene and why some people love him whilst others hate him. “Kill the Irishman” is enjoyable enough for a one time viewing and if you haven’t watched this yet (yes it’s 6 years old now) I would give it a go.