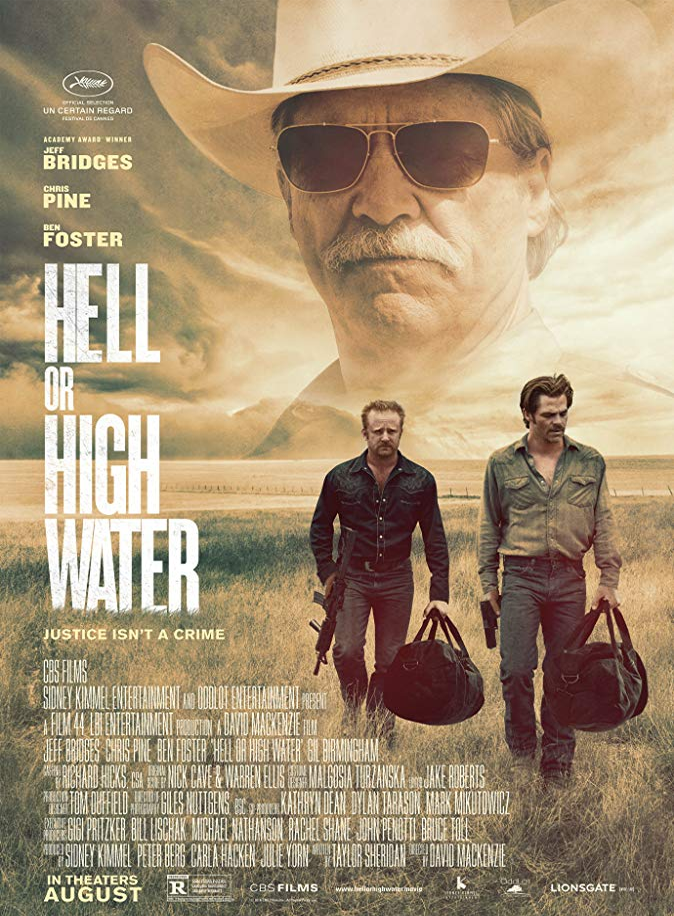 A classic cop and robbers tale with a modern twist. Hell or High Water is a pacy, and at times, highly absorbing, neo-western drama from talented Scottish director David Mackenzie. We follow the escapades of two brothers, reunited against the bank that’s threatening to foreclose their families oil rich farm. It’s a simplistic story, that packs a punch, questioning the morality of today’s society, the greed of banks and the human effect of the economic decline in south west Texas.

Very quickly, it becomes clear that the dialogue in this film is a star in and of itself. Nigh on every person with a speaking part has a way with words and a level of wit normally reserved for characters with chunkier roles more central to the main story. Following the first heist, one of the bank tellers is asked the question “Black or white?” by the investigating officer “Their skins or their souls?” is her response. An old man complains “This is crazy, ya’ll ain’t even Mexican” before cheekily responding to a question about having a gun. Even a disenfranchised cattle herder gets to have his say a short while later and does it was some panache. Bemoaning his antiquated profession and sympathising with his kids unwillingness to follow in his footsteps.

Chris Pine gives perhaps his best performance to date as the scruffy, unkempt looking Toby Howard. “I’ve been poor my whole life, till my parents and their parents before them. It’s like a disease, passing from generation to generation” we hear him say. He’s a man with a past and he’s looking to make amends. It’s for this sole reason that he enlists the help of his ex-con brother Tanner Howard (Ben Foster). They face a race against time to save the family property, which if successful, will provide Toby’s sons with the financial security he never had. It’s Pine’s character that devises the plan to rob the banks and he’s the brains behind the brawn of the older Tanner. Famed for his role as Captain Kirk, he couldn’t be more unrecognisable here.

It would be fair to say that the Howard brothers are not your typical bank robbers, only hitting the registers and stealing fairly low sums of money in each heist. They target the small, local branches of Texas Midlands Bank, spread out across the south west of the state in a deliberate attempt to remain under the radar of the FBI. They are successful in doing so and the chase is left to veteran Texas Ranger Marcus Hamilton (Jeff Bridges) and his stoical partner Alberto Parker (Gil Birmingham). “You may get to have some fun, before they send you off to the rocking chair just yet” we hear Alberto quip to Marcus as news of the heists break. Just weeks from retirement, the grizzled, wily, old veteran, with all the detective traits of a Colombo and the determination of a Harry Callaghan, is in no hurry to accept the quiet life. He sees a pattern in the robberies and persuades his long suffering partner Alberto to join him. Jeff Bridges incidentally, is able to slip into the character of Marcus with consummate ease. Not many are able to do the hardened, grizzly character better than Bridges and he manages to do so whilst providing plenty of wit and sardonic humour to boot.

Taylor Sheridan and David McKenzie really weave a beautiful story together here. Blurring the lines of morality as the movie goes on, the violence starts to increase and things begin to take a turn for the worse on both the perceived good and bad side of the line. His punchy dialogue really brings the film to life, adding an air of authenticity to the bonds of both the opposing pairs, with some cracking banter at times. Marcus continually jokes about his half Comanche partners heritage and Toby takes delight in telling his brother to “Drink up” after he complains about being given Mr. Pep instead of Dr. Pepper as “Only assholes drink Mr. Pep”.

As the film enters its final act the ‘leading quartet’ for want of a better word continue to share equal screen time and a fantastic synchronous scene plays out to the beautifully, melancholic lines of Gillian Welch’s ‘I’m Not Afraid to Die’. Toby and Tanner spend what could ultimately be their final day together, playfully fighting with each other, drinking beers whilst reminiscing and contemplating the day ahead. Meanwhile, Marcus and Alberto, likewise spend their the day and night staking out a potential heist target in almost abandoned town, that harkens back to the ghost towns of the old westerns. A special mention must be given to the visuals during this scene. They are stunning and amongst some of the best in the movie.

Speaking of visuals. Giles Nuttgens does an incredible job of making the south west Texas landscape every bit as much of a character as any of the stars in the film. The use of a predominantly beige, brownish, earthy palette and oversaturated image really helping to emphasis the harsh heat and dustiness of the arid landscape. Nick Cave and Warren Eillis’ score provides slow, contemplative piano and string arrangements with a healthy mixture of country rock ballads from the likes of Waylon Jennings and Townes Van Zandt interspersed between. The juxtaposition between the two creates a perfect balance that really adds some emotional depth to the story.