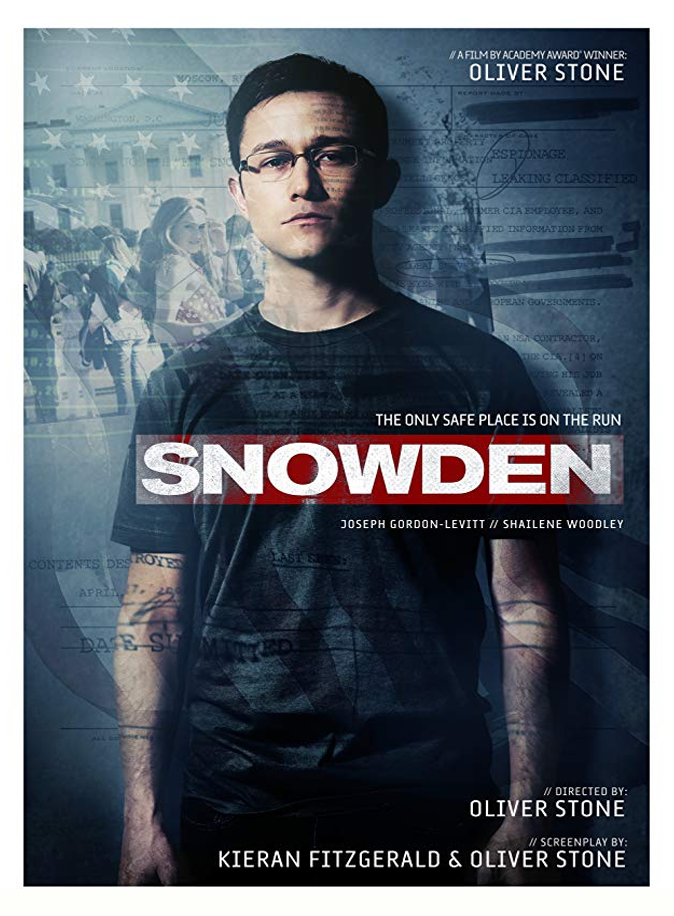 “This isn’t about terrorism, terrorism is the excuse. This is about economic and social control” – Edward Snowden (2013)

Although this movie was released back in September 2016 I have only just got round to watching acclaimed Director Oliver Stone’s Snowden.

The basis of the movie is a special forces dropout and now CIA computer analyst Edward Snowden (Gordon-Levitt) leaking thousands of illegal and classified surveillance technique documents distributed to the press of the real life events that went down between 2004 and 2013.

Most of the story flits back and forth as Snowden relates his story to documentary filmmaker Laura Poitros (Melissa Leo) a journalist Glenn Greenwald played by Zachary Quinto and Guardian journalist Ewan MacAskill (Tom Wilkinson) in a hotel in Hong Kong in 2013. Snowden makes it clear to the 3 journalists that the CIA will come after him and accepts the consequences of espionage and warns Poitros,Greenwald and MacAskill they will be coming for them too.

It’s Flashback time – Snowden works on various assignments across the U.S, and learns that the Government is using means to intrude on the privacy of the American people and further afield. Snowden works his way up into the highest circles of the U.S. intelligence community with the force of electronics and surveillance under Corbin O’Brian played by the brilliant Rhys Ifans.

When his revelations are published in the British newspaper The Guardian, which Greenwald and MacAskill worked for. Snowden goes on the run and ends up at Moscow International Airport just a few days after his story hits the Internet and in exile, a fugitive from what passes for American justice in the 21st century.

From what I’ve read online, Oliver Stone was initially reluctant to Direct the Edward Snowden story in any way, shape, or form. But Kucherena (Snowden’s real-life attorney in Russia) and GlennGreenwald themselves convinced  Stone and he agreed to do it, with Fitzgerald assisting him in the writing of the screenplay, and the result is one of the great films of 2016.

I’ll be the first to admit I knew OF the Edward Snowden story but having looked further into his real life you can see the striking resemblance with Gordon-Levitt. We get to see the real Snowden at the end of the film explaining why he did what he did and why coming back to America would  result in him not getting a fair trial.

The movie is a drama and I’m glad they kept this throughout and weren’t tempted to add action (which I was concerned about when Snowden went into hiding) I also have to commend the filmmakers for what looks like sticking to the facts and not “Hollywoodising” the story based on real events.

Joseph Gordon-Levitt did as good a job as any actor could and I was pleased with his performance and he is supported by a strong cast.