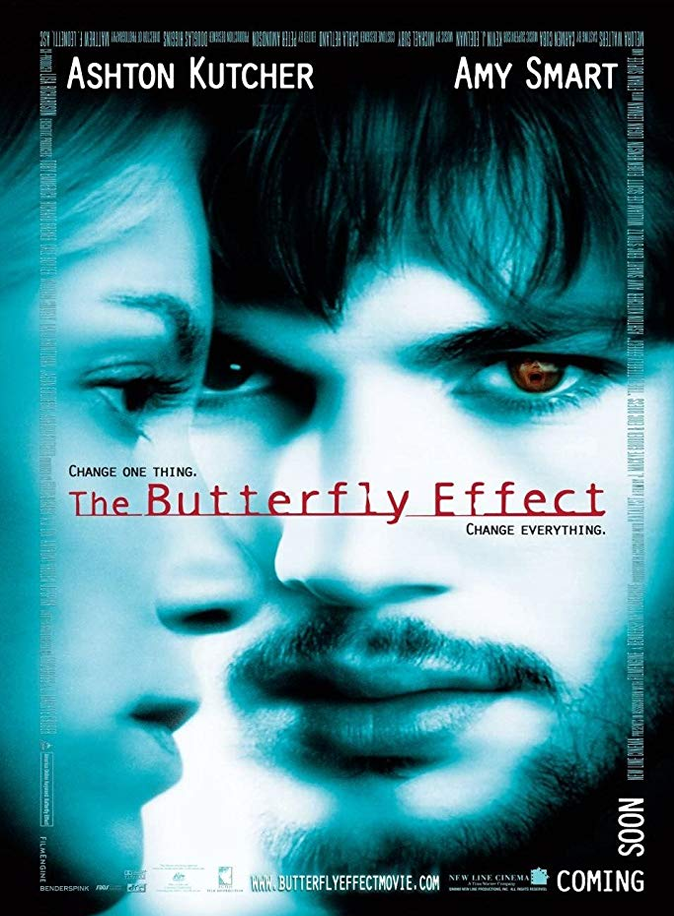 I seem to be having a run of “Time Travel” themed movie reviews of late. Is it because I enjoy the subject? Yes. Is it because I am interested to see different movies use different ways on how the handle time travel? Yes again. In 2004’s The Butterfly Effect filmmakers and also the writers Eric Bress and J. Mackye Gruber used memory blackouts and journals to end pockets of time and moment to alter the course of history.

Although I’m not the biggest Ashton Kutcher fan out there I felt the actor did a pretty good job playing the lead character Evan Treborn and with a great supporting cast there could be some quality and integrity about this latest time travel film.

Evan Treborn is a troubled young man who suffered blackouts as a child. His father is locked up in an institution for suffering similar effects and this appears to be troubling Evan’s Mother Andrea played by Melora Walters who is clearly concerned that her boy is following in his footsteps. Evan discovers a way to travel back into the body of his past self, but his time travelling exploits start a chain reaction of negative results on his present self (Kutcher). As he uses his powers to try to fix his past and present, the effect escalates, creating alternate realities, many of which are worse than the past that he is trying to change.

This is one of the elements of this movie I enjoyed and to be honest was very impressed with the casting as we jump into certain time periods in Evan’s life with his friends Kayleigh, Tommy and Lenny. Each time period for these characters are perfect in the way the actors portray them and in looks also you are convinced that they must of some how filmed this movie over a 15 year period. I’m not kidding, are all versions of these characters related?

Anyway, it’s during these periods that Evan suffers blackouts at crucial times when we the audience members also have to recollection of what just happened until the present day Evan (Kutcher) reads the journals to time travel back to fill these blanks in and hopefully changed things for the better. Young Evan at 7 and 13 are portrayed by Logan Lerman and John Patrick Amedori respectively and are easily passable “Young Ashton Kutcher’s”

We also get to know the characters a lot better this way. Amy Smart portrays the present Kayleigh, his childhood friend and later his sweetheart, who by my reckoning has the most challenging role in the movie every time Evan alters the past we see a different Kayleigh when he returns to present day and Smart delivers in every scene. Also credit has to go to 7 and 13 year old Kayleigh’s Sarah Widdows and Irene Gorovaia who portray the young versions of Amy Smart’s character really well, especially in some very dark scenes involving Eric Stoltz.

Tommy is Kayleigh’s younger brother and portrayed by Cameron Bright as the 7 year old version and Jesse James as a 13 year old Tommy. It’s mostly these two time periods we see Tommy at his most troubled and quite sadistic periods in his life. Both Bright and James do great jobs at portraying an angry young man who suffers through his abusive father played by Eric Stoltz. The actor William Lee Scott portrays the present day version of Tommy but to be honest doesn’t have enough screen time compared to the other two actors.

Lenny is probably the one out of the four lead characters whose casting is probably a slight mixed bag. Although Jake Kaese and Kevin G Schmidt play Lenny as a young boy the character in the earlier periods really doesn’t have much to do other than act mostly troubled by Tommy’s actions. It’s present day Lenny that I was so glad to see Elden Henson portray the groups friend. Henson is a fine actor and is shining in Marvel’s Dare Devil currently as Foggy Nelson and in “The Butterfly Effect” performs great in all versions of Lenny and shows a range of emotions similar to Smart’s character.

Eric Bress and J. Mackye Gruber I felt did a good job in directing such a complex story in a film where the timeline is constantly changing it would be easy to get lost in the complexity of the movie but thankfully the direction allows the audience to digest what is happening on the screen with some simply but effective camera shakes and blurred vision to explain the time shifts when the lead character changes something in the past. Brews and Gruber are clearly visual guys and although some of those effects are quite literal I felt it was a nice touch to visually see events being erased as the timeline changed.

“The Butterfly Effect” is an incredibly fast-paced action that although deals with child abuse, murder, sadism and there are some pretty traumatic events in a short period of time comes off well and gets a good result. The story really embraced myself and from an emotional point of view really does hit home with the end result in what Evan has to do to make everyone’s lives better.

I must point out that this review is actually based on both guts of the film. There is the tradition theatrical cut and the directors cut. Having viewed both it really is only the endings that are of any significant change but both involve Evan having to make that ultimate choice and without spoiling the ending of either. One is a little more Hollywood style ending with a terrific Oasis track playing over the top of the montage (Stop Crying Your Heart Out) and the other is possibly one of the saddest endings I’ve ever witnessed in movie history. But overall this movie is still enjoyable to go back to after 13 years and I still recommend to anyone who hasn’t watched it to do so.