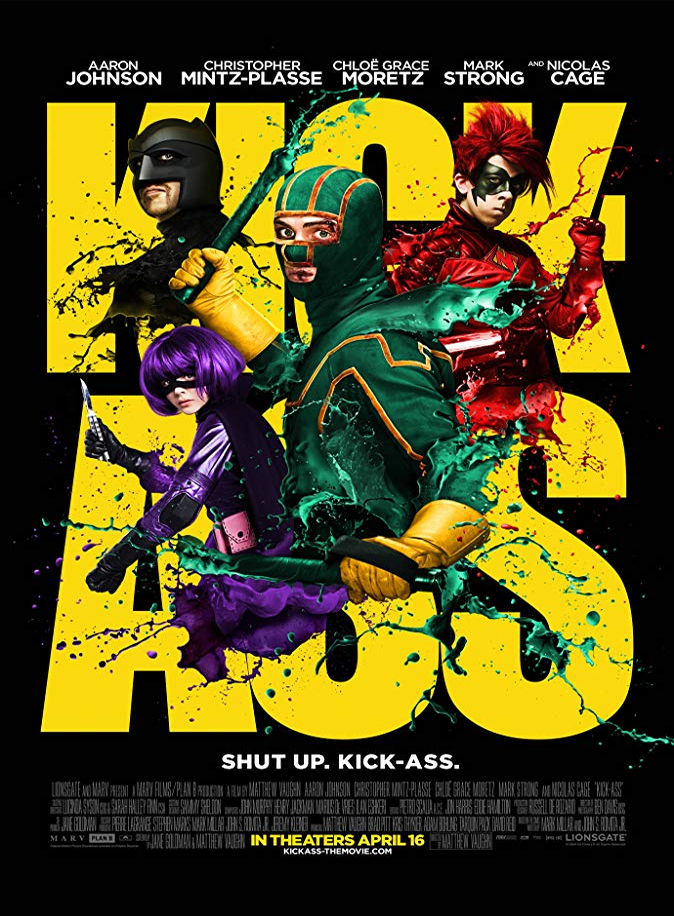 I can recall when ‘Kick Ass’ was announced to be made into a live action movie. If my memory serves me correctly it was around the same time as ‘Watchmen’ that was released the year previously.

I have never admitted to being a comic book fanatic. I’m more of a regular main stream fan who grew up on Spider-Man, Superman, Batman and The Incredible Hulk. Mostly through the live action television series was as far as it went for me.

Looking at the artwork at both Kick Ass and Watchmen I have to admit I was more drawn to the story of Laurie and Sally Jupiter, Dr. Manhatten, Rorschach, Edward ‘The Comedian’ Blake and Dan Dreilberg and the dark world of Super Heroes that Zack Snyder had created for the cinematic experience based on the Alan Moore and Dave Gibbons graphic novel in comparison to Dave Lizewski’s scrawny teenage superhero Kick Ass.

If I could go back 7 years ago, I would kick myself for my ignorance and into the realisation that this movie like it’s comic book creator Mark Millar was a force to be reckoned with.

The first movie I saw of director Matthew Vaughn was the 2004 hard hitting movie Layer Cake starring Bond to be Daniel Craig and although an enjoyable movie at the time, it never really stuck with me the name “Matthew Vaughn” but having experienced his movies post “Kick Ass” it is clear to see why his movies are very memorable and have a certain style. When you mix that with the graphic novel of Mark Millar you have a recipe for something unique, very special and unexpected.

My first viewing of Kick Ass back in 2010 has stayed with me since that day as going into the movie unassuming and not expecting too much from it, I can recall being blown away by the story, the acting, the characters and the visuals.

“Kick Ass” is the story of Dave Lizewski, an unnoticed high school student and comic book fan who one day decides to become a superhero, even though he has no powers, training or meaningful reason to do so other than fed up being bullied and being a nobody.

Dave’s story up to the point of becoming a superhero is very similar to Spider-Man’s Peter Parker in every sense that like Peter, Dave wants a life of meaning, struggling with teen angst and up to this point, doesn’t really know what he wants from life. This is obviously where Dave Lizewski and Peter Parker’s lives stop and one lives in the real world and the other in comic book world.

This is what I enjoy about the world of Kick Ass. Although in our real world Kick Ass is a comic Book hero, in Kick Ass the world is every bit as real.

With Dave hell bent on making a difference to the world. Things don’t go according to plan on his first outing as the green suited hero. In fact after confronting two thieves trying to jack a car. Kick Ass ends up being stabbed and if that’s not enough is then run over. It is at this point you realise how graphic this movie is going to be in its tone and more important it’s mature theme for a comic book hero. The scene also signifies the style of movie Vaughn is making here and it’s at this point I was hooked. It’s not that often you actually see the “Superhero” of the movie vulnerable, struggling with courage, scared and unsure of his decisions once committed to the confrontation.

Thankfully Dave survives (only just) and spends months recuperating from multiple operations in which metal plates are installed into his body and he has also lost a lot of feelings due to irreparable nerve endings, which sounds to me like the making of a superhero??? even Todd and Marty test Dave’s disabled nerve endings out and declare “You’re practically a superhero!”

With Dave now back to full health he sets up a website for victims to contact him to help them with an “any job, not to small” approach isn’t very successful until he helps a victim who is chased by five other guys and manages to fend them off, whilst all captured on mobile phones by the onlookers and downloaded on to YouTube where Kick Ass becomes an overnight internet sensation.

Up to this point I have to admit although I enjoyed the storyline but felt it may have peaked too soon. That is until Big Daddy (Nicholas Cage) and Hitgirl (Chloë Grace Moretz) enter the scene and notice this internet sensation and want to check him out to see if he is the real deal or not. In fact one of the most enjoyable lines comes from Cage who says after watching the YouTube video. “Maybe he should think about calling himself “Ass Kicked” Cage delivers this line in classic Adam West as Bruce Wayne fashion with an added snigger as to be pleased with his funny one liner.

Cage and Grace Moretz are perfect together as father and daughter fighting crime and I have to admit being shocked and amazed at Grace Moretz’s portrayal of the pint sized crime fighter. Her lines are delivered perfectly and up against the veteran actor there is natural chemistry between both of them and she really matches her on screen Dad in every scene they appear in. It’s a strange thing to say, considering the relationship but you would swear that Nick Cage is her real Dad, if that makes sense.

Also taking notice of the Kick Ass video is Dave’s classmate Chris D’Amico portrayed by the brilliant Christopher (McLovin) Mintz-Plasse. Chris is the son of big time gangster Frank D’Amico (Mark Strong) and points out to his father the menace in his city who sets out to end Kick Ass’s rise to fame before he does any significant damage to the D’Amico Empire.

Both Mintz-Plasse and Strong appear to have a great relationship as far as acting goes although the characters appear to have little in common as Chris appears to be a disappointment to Frank in he seems to take after his mother rather than his father and Chris is aware of this and is desperate for his father’s approval convinces him to invest in a superhero costume and persona into luring Kick Ass into a trap. This sets up a brilliant climatic battle between our superheroes and the gangsters of the city and ends in once of my favourite onscreen moments involving a jet pack and An American Trilogy by Elvis Presley being played over this scene. It really is a great moment in the movie that will make the hairs on your arm stand up.

Overall Kick Ass is a stunning piece of work from all elements within the movie. The pacing is just right throughout the duration, the visuals are stunning and in particular the fighting sequences, the acting and casting is basically lightening in a bottle and with a great storyline and fantastic catchy soundtrack I found myself watching this movie over and over again. If you haven’t watched Kick Ass yet, where have you been? Highly recommend.