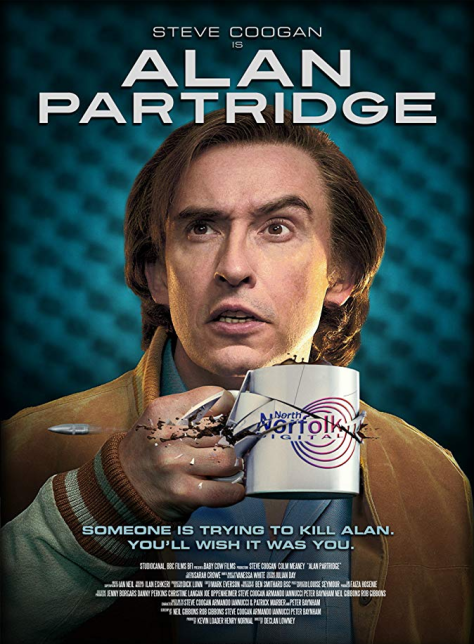 Any television show or television based character usually doesn’t translate well on to the big screen. Shows that condense most of it’s comedic content can pull this off in the usual 22 minute format but trying to stretch those same values over a longer period isn’t something that comes around often and when a TV show is brought to film it usually fails to live up to the expectations of its fans.

I felt this with “The Simpson’s Movie” and more recently David Brent’s “Life on the Road” I am a massive fan of both properties but where an unimaginative plot may be forgiven if the script is passable. Neither of these two lived up to their television shows.

Going into watch “Alan Partridge: Alpha Papa” back in 2013 I had my reservations, but I was intrigued on how Steve Coogan and Peter Baynham were going to manage to pull this off. One of the things that I felt was a clever device to use in preparing the audience for this format was the release of “Mid Morning Matter” on Sky TV. I’ve been a fan of Coogan for almost 25 years now and Partridge for just as long. “Mid Morning Matters” ditched a laughter track which I felt was overly used in “I’m Alan Partridge” series 1 (1997) and series 2 (2002). Don’t get me wrong, both were pieces of art, but the transition of a “canned” audience straight to film would never had worked and I felt “MMM” cleared the runway for “Alan Partridge: Alpha Papa” to have a least a smooth landing and a chance to succeed.

When Norfolk’s most famous DJ Alan Partridge’s radio station North Norfolk Radio is taken over by a new media conglomerate who want to rebrand as “Shape Radio” ,it sets in motion a chain of events which see Alan having to work with the police to defuse a potentially violent siege after sacked DJ Pat Farrell (Colm Meaney) holds the station hostage. Alan views the situation as an opportunity to move forward in his career as the “go between” between Farrell and the Police and at the same time impress Jason Tresswell (Nigel Lindsay) head of Shape.

As previously mentioned, a flimsy plot can damage any credibility in a film if there aren’t any other elements to save it. Yes “Alpha Papa” isn’t the most complex storyline and yes there are no sub plots going on. The movie is a simple but funny hostage movie. What makes the movie not only watchable but keeps you interested in how Alan is going to play this and what his end game is. Fans of the television series will understand the character and “get” what Alan is all about. Coogan knows the character so well and has admitted that parts of the character have taken over his personality at times and equally has admitted his fondness and enjoyment revisiting the character every now and again.

I was delighted to see the return of Alan’s loyal PA Lynn played by Felicity Montagu who was a star in her own right throughout both series of “I’m Alan Partridge” and also in another Steve Coogan series “Coogan’s Run” It had been over e decade since we last saw Lynn and Montagu just slips back into the character with ease. The same can be said for Michael played by the brilliant Simon Greenall who just like Felicity Montagu didn’t feature in “MMM” and again just slotted back into this world as if he had never been away. Michael was the handyman in the Linton Travel Tavern in Series 1 of “I’m Alan Partridge” and again in series 2 as a Petrol Shop Assistant “I’m Michael, I’m here to help” in “Alpha Papa” he is now the doorman at the radio station. Okay admittedly this does feel a little forced on having him there, but unfortunately Greenall is used in only a few scenes and this was one of the rare disappointments of the film.

Sidekick Simon from “MMM” is back and the brilliance of this character played by Tim Key is that him and Alan although work on the show together are night and day. Key delivers some of the funniest one liners in the movie and is also sporting a very odd gun holstering hat constructed by the mad sacked DJ Pat Farrell. Meaney must have been the actor the writers thought of when putting pen to paper when this project kicked off as I cannot imagine another actor playing the role. There is something unique and although disturbing, very funny about the character of Pat Farrell and how he thinks this is going to play out.

Both Coogan and Meaney share so much screen time playing opposite each other and this isn’t a criticism by any means. Both actors really bounce off each other and one particular scene involving Partridge fantasising about a rescue job results in three special force men (all played by Alan Partridge) unmasking  and introducing themselves as “Jason Stratham” “Jason Bourne” and “Jason Argonaut?” That results in Partridge mumbling “Jason Argonaut? It’s Jason and the….Argonauts”

“Alpha Papa” is littered with funny little lines like this a most of them are hits rather than misses and will make you laugh. Is “Alpha Papa” as good as “Knowing Me, Knowing you with Alan Partridge” I’d probably go as far as saying yes. Is it as good as “I’m Alan Partridge” or “Mid Morning Matters” I’d definitely say no. What Coogan and Baynham have achieved though is a rather amusing movie about a much loved British character that has been on our screens since the early days of “The Day Today (1994)” with a simple but effective plot that isn’t forced or begging to be laughed at. If you haven’t watch “Alan Partridge: Alpha Papa” I would recommend it.