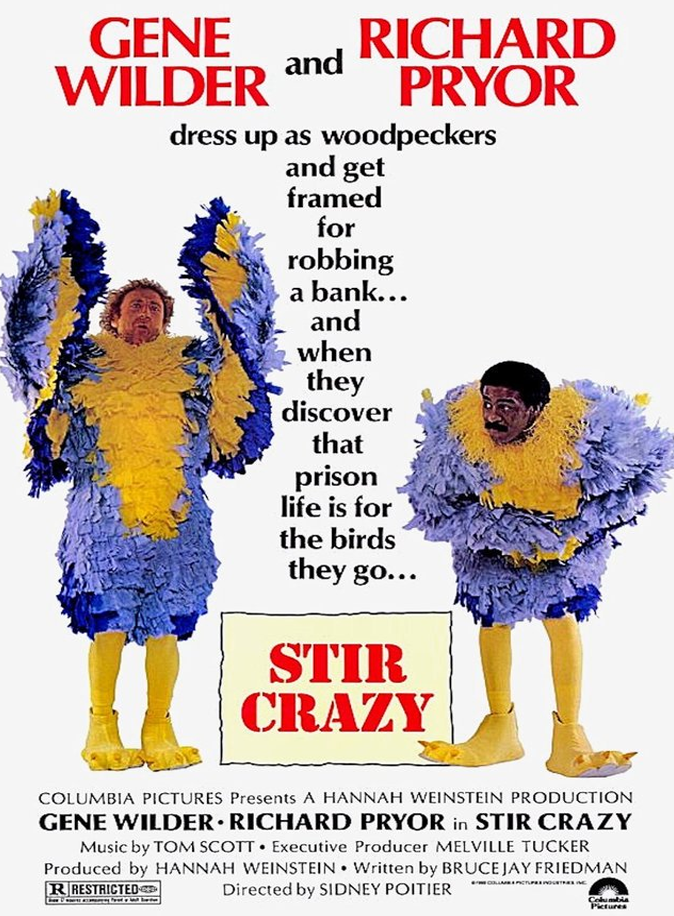 I thought I’d take a little trip back nigh on forty years and review one of my all-time favourite comedy movies. This one has a special place in my heart too because it was the first time I ever had the pleasure of seeing Gene Wilder and Richard Pryor on the screen together. Mix that with another favourite of mine, Sidney Poitier, popping up in the directors chair and it’s a match made in heaven. Of course, I’m talking about Stir Crazy, the classic from 1980.

I’m always of the opinion that a director should, if possible, try to really set the tone of what he’s looking to accomplish in a film within the opening five to tens minutes. Stir Crazy does this with a highly memorable double opening scene. It quickly introduces us to Harry Monroe (Richard Pryor); at this point a waiter, who’s stash of marijuana ends up making its way into the guests salads with absolute carnage and hilarity ensuing. In particular, the stoned innuendo between the priest, woman and elderly semi-deaf lady was a highlight. If that wasn’t a perfect start then Skip Donahue’s (Gene Wilder) introduction directly afterwards ensures perfection. The characters complete lack of grip on reality and flaw of seemingly seeing the best in everyone gets perfectly conveyed in the bar brawl that erupts.

Amongst the craziness of the stoned guests, pliers being painfully and inappropriately used by small Hispanic men however is the early spark that propels the film forward. The two men are newly out of work, both having being fired, and they decide, stupidly, to head for Hollywood to pursue their dreams of stardom, leaving New York behind. Skip is a film writer you see and Harry an actor, so off they go to pursue the American dream. It’s established early though, that these are two guys who have no luck for bad luck and they’re soon implicated in a bank heist after two armed robbers assume their places as mascots in an Arizona bank (they were doing small jobs on the way to earn quick cash). This bit of misfortune is soon exacerbated when they’re hastily tried and sentenced to a 125 years in prison. Bedlam, panic, disbelief and sheer shock ensue. Skip tells the judge to sit back down after his judgement and Harry, on the verge of tears, ponders being an ‘old man’ upon release (remember they were sentence to 125 years)

This is when the film really gets going and there’s so many genuinely hilarious moments that occur upon their arrival and stay at the prison. Skip almost immediately has a mental breakdown and begins riding Deputy Warden Wilson’s (Craig T. Nelson) back like a jockey, Harry transforms into Bruce Lee and starts letting everyone know that he’s “bad” and “don’t take no shit”. There’s an array of side characters that pop up during the extended (the vast majority) prison segment of the film, a few of the more memorable ones such as; Grossberber (Erland Van Lidth), Rory Schultebrand (George Stanford Brown), Warden Walter (Barry Corbin), Meredith (JoBeth Williams) and Jesus Ramirez (Miguel Ángel Suárez) are all perfectly cast, with excellent chemistry, play off each other well and only help to add to the hilarity the two protagonists bring.

Like I said, there’s many funny moments in there, but none comes close to the good ten minute mental and physical onslaught that Skip goes through upon Warden Walter discovering his unlikely propensity for being a star rodeo rider. This of course gives the Warden an idea. He’ll volunteer Donahue for the annual prison contest coming up and make a mint off of his inevitable success. Skip has other ideas however, sensing a chance to gain some perks for him and his fellow inmates, he decides to hold off in the face of ever growing adversity and torture. The result of which is possibly one of the funniest moments I’ve ever seen put to film. He tries to project an aura of normality to his taskmasters, whilst internally he’s absolutely gone. What makes it so funny though, other than the man being an absolute lunatic, is that he actually holds up to the punishment and even a night sharing a cell with the widely feared Grossberger.

Gene Wilder and Richard Pryor are at their comedic best here with both delivering pitch perfect performances that effectively carry the entire film throughout. What really makes their palpable chemistry all the more remarkable is the fact that they rarely if ever actually socialised outside of filming. With them having starred in so many classic and very funny films, there’ll always be a degree of debate, I’m sure, about which was their best together, but for me there is no debate. Stir Crazy is the clear winner. I love Silverstreak and See No Evil, Hear No Evil too, but this tops them. It has a little bit of everything; humour, romance, action, brilliant dialogue, weird and interesting characters, and even a tense prison escape.

Now, I think it’s obvious, given that I’ve spent 90% of this review waxing lyrically about it, that I’m going to highly recommend Stir Crazy. I was actually surprised to see it only has a 6.8/10 on IMDb, which perhaps just proves how subjective a subject movies actually are. I think it’s slightly better than that rating would imply, though certainly not perfect by any means, and I would suggest if you’re a fan of comedy and have somehow missed this classic to give it a watch for sure. It’ll certainly not disappoint.