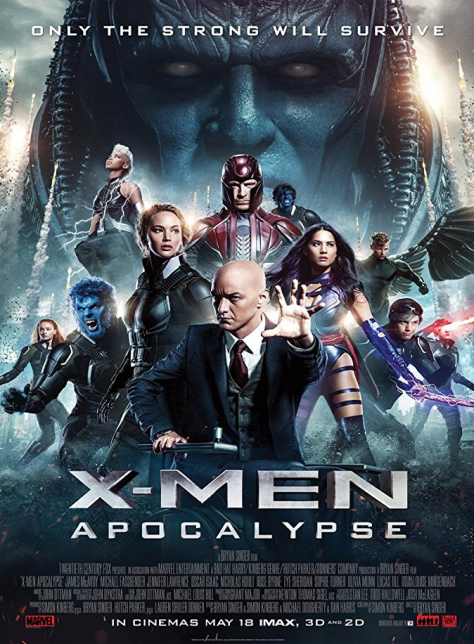 Set in the 1980’s, the re-emergence of the world’s first mutant, Apocalypse, the X-Men must unite to defeat his extinction level plan.

2 years after the successful X-Men: Days of Future Past I was interested to see where the next instalment would take the younger Charles Xavier, Erik Lehnsherr and Raven and more importantly would it equal the previous or perhaps supersede  it. Quite frankly although it didn’t disappoint, it wasn’t as good as DOFP. The later had the post credit scene setting this movie up and I was excited to see how this would fair.

Bryan Singer and Simon Kinberg are terrific writers and we owe a lot to them for their take on this universe and how they manage to appease the movie going public and the devoted comic book fans. In Apocalypse, I felt they played it safe with the usual formula of one of the main three characters conflicted with the other two trying to bring them back. In this instalment, it’s Erik Lehnsherr who is lost….again, although through personal tragedy he is drawn to help the world-destroyer Apocalypse flatten and rebuild the Earth to his plan.

Playing Apocalypse is Oscar Isaac. A fine actor but under the heavy makeup of En Sabah Nur it could have been anyone in there. I’m just glad he wasn’t computer generated completely. Was he that menacing as the movie villain? Not exactly. His plan is to use certain mutants like in a game of chess and the key mutant that he requires to mind control the entire planet is Charles Xavier. Personally I felt the character was a little two dimensional and didn’t add that much weight to the film. I actually preferred Kevin Bacon’s villain Sebastian Shaw who was perfect in “First Class” and although powerful had character and a cunningness about him.

James McAvoy, Michael Fassbender and Jennifer Lawrence again are solid in their portrayals and I’m glad to see all three of them are back for next years X-Men: Dark Phoenix (2018) We finally see McAvoy go all Patrick Stewart and lose his hair, Lawrence as Raven / Mystique is conflicted as usual but to be fair shows more authority in this movie than previous where normally she would be a bit of a lone wolf, here she is a team player. Fassbender is really coming into his own with his character and although I loved Ian McKellen’s Magneto, I must admit I am becoming a fan of Fassbender’s earlier version. Supported by Nicholas Hoult as Hank / Beast and the return of Rose Byrne’s Moira Mactaggert the cast was excellent and I was interested to see how the “new” mutants Jean Grey (Sophie Turner), Scott Summers / Cyclops (Tye Sheridan) and Kurt Wagner / Nightcrawler (Kodi Smit-McPhee) would slot into this timeline. Thankfully they all performed well and again I look forward to seeing them in the next movie Dark Phoenix.

Going back to Singer and Kinberg “playing it safe. I felt the cameo from Hugh Jackman was unnecessary and it worked okay in First Class as a one off funny scene. Here there is no humour but it kinda reeks of no confidence adding him to this film. He doesn’t serve any purpose and although only in the film for about a minute I felt they should have left Logan out of this and show a bit more faith and confidence in the existing portrayals by McAvoy, Fassbender and Lawrence who are now in their third movie.

Visually some of the effect shots looked a little poor and off putting. To compare I would say some of them reminded me of Attack of the Clones and that’s me putting it nicely. The storyline as mentioned is simple and straightforward and the finale is a little predictable. Overall I was a little disappointed with this instalment after the successful DOFP and I understand that it was always going to be tough to match that film. Apocalypse isn’t the worst film in the franchise by any means and it’s enjoyable to watch a few times. I hope X-Men: Dark Phoenix (2018) is a lot darker and it appears that the franchise may be going in that direction with the releases of Deadpool (2016), Logan (2017) and the upcoming The New Mutants (2018) all going down a darker route. I would recommend Apocalypse to anyone who enjoys the series but don’t go into it like I did with high expectations.