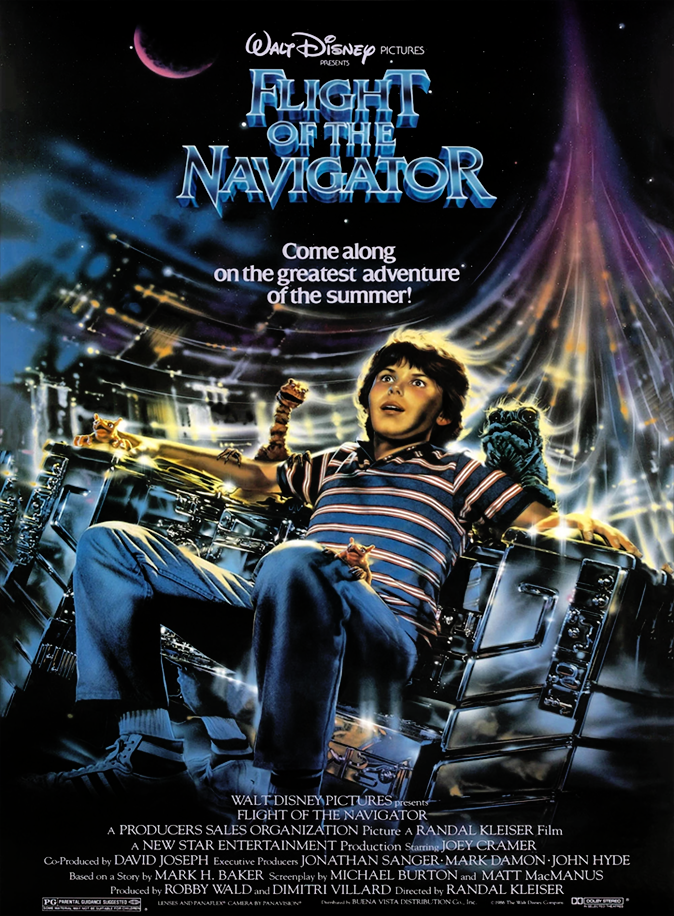 Flight Of The Navigator was one of the first VHS releases I rented (via my Gran) from my local Azad Video Store. I must have rented this out at least a dozen times as a 10 year old boy fascinated with Time and Space. Being hot on the heels of the best Time Travel film of all time (in my opinion) Back to the Future (1985) it was going to be difficult for Disney (who actually passed on BTTF) to match or surpass the classic film starring Michael J Fox and Christopher Lloyd. To be fair, Flight of the Navigator was intentionally going to be released as an independent film at one point until Disney bought the rights to the movie, which in turn helped the film being released with their financial injection into the project.

The film opens in 1978 at a Frisbee Competition (so 70’s) and in the first five or so minutes Director Randal Kleiser plays with the audience via using some visual into tricking us into seeing some flying saucers early on with the use of firstly silver looking Frisbees flying around with a cityscape back drop and then again when the crowd at the event pause as a “aircraft of some description” passes over head. In fact, it was a hot air balloon of some sort. We are then introduced to the Freeman’s who attended this event with their rather pathetic looking dog “Bruiser” which is far from being a bruiser. Cliff De Young plays the Father Bill, Veronica Cartwright as the Mother Helen. Albie Whitaker as the 8 year old younger son Jeff and the main character of this film David played by Joey Cramer who in 1978 is 12 years old.

The Freeman’s are a typical American family who plan to spend their 4th of July on their boat in their home town of Fort Lauderdale setting off fireworks later that night and enjoy some hamburgers on the way. On the way home from the Frisbee Championships it is clear to see both David and Jeff have a typical older / younger Brother relationship in teasing each other with name calling and some light hearted bickering. Jeff asks to be dropped off to play with his friends whilst arriving home David has girl trouble which is typical in these type of films on how a 12 year old boy learns to interact with a particular girl who I assume is in his class at school. We get the Father / Son talk and before they are heading out to have their burgers and light their fireworks, David’s Mum asks hm to collect Jeff from the neighbours a mile away through some woods. It’s here the story begins to take shape and pace.

Jeff jumping out of a tree in the middle of the night startles David and Jeff runs home feeling pretty chuffed with himself. David on the other hand is distracted as he senses something isn’t right in the woods and continues to investigate the unusual presence he feels. Slipping into a ditch, David is knocked unconscious and what appears to be maybe minutes or an hour or so, David awakes and makes his way back home. Only when he attempts to open the door he is met by a strange old lady who claims this is her house along with her husband. David is naturally freaked out and barges his way into the home that looks totally different to the one he left only hours before. There is no sign of his family and we the audience are as confused as the lead character.

Kleiser’s opening 15 to 20 minutes of this movie is great. He knows how to set the tone of the film and he achieves to give a feel of two time periods so close together a realistic charm. The fashion and attitudes between both timelines are a little in your face at times and in particular with the 1980’s but there are subtleties also and most of them are within that 20 minute opener. We discover David has been missing for 8 years and is presumed dead at the local police station. His reintroduction to his family should have been emotional, but instead is rather creepy in the makeup and prosthetics of Bill and Helen Freeman. Even the Dog is something from a nightmare with it’s almost albino like eyes. David naturally faints at seeing how old his Mum and Dad have became in 8 years, but to be fair losing their son on that fateful July night has clearly taken its toll.

Now the Science bit. Hospitalised and confused David is reintroduced to his Brother Jeff (now played by Matt Adler) and in his own words “This is totally Rad, you’re like my older little Brother” this scene between the brothers is actually touching as Jeff has regretted that night he frightened his older brother in the Woods and shares some guilt in what he did that night. The brothers actually make a connection and Jeff isn’t that annoying little brother anymore. After some intense, tests in the hospital and brainscans it is unexplained why David hasn’t aged in the time between 1978 and 1986. Some of his test results are even more baffling as they display some form of a ship or cocoon.

We are then introduced to Dr. Louis Faraday (Howard Hesseman) and his team at NASA who have discovered an unidentified flying saucer that coincidently looks like the images in David’s mind. This is where to story begins to unfold and the dots are connected on what has happened to David and his importance to this discovery and his own predicament. David is whisked off to NASA for further tests and it is here he forms a friendly relationship with Carolyn McAdams (Sarah Jessica Parker) and in its own subtlety shows David developing a way to talk to girls (nice work Mark H. Baker (writer). I think this is the first film I saw SJP in and to be fair she makes an impression on the character and serves a purpose to how David is going to escape from the clutches of NASA and connect with the ship that is calling him in his sleep.

When we finally see David connect with the ship we are then introduced to Max the ships computer voiced by Paul Reubens (who is going under the guise of the name Paul Mall to add further mystery to the character and voice of Max) who over the next 50 minutes or so develops and understands David and humans in general. We learn that Max is a collector of species and investigates lifeforms throughout the Galaxy. There are some funny moments in there between both David and Max and although limited in time, develop a friendship in this part of the film. There is a real sense of Cat and Mouse between David / Max and Faraday at this point and for the rest of the film. David just wants to go home but realises that he and his family are never going to be left in peace. It is then David realises and decides that he must return home to 1978. Max explains that there is a great chance that his mind and body could disintegrate in attempting this but there is a sense that Max holds himself responsible for the situation and taking David away from his family.

Overall, I would have been interested to see how Flight Of The Navigator would have been released as an independent film but nevertheless the film managed its release thanks to Disney. Yes, there are some Disneyfied elements in there and at times the movie is a little cheesy (even for 1986 standards) I enjoyed this film on it’s first viewing as I felt it had enough in there to interest me as a kid and to be honest although I don’t go back to it that often, it is a nostalgic trip down memory lane for me. Visually the movie for it’s day was stunning to look at (especially those liquid metal steps on the craft) and the interior of the ship (pure chrome) was nice set design. Joey Cramer was great in the lead role and unfortunately has had a tough time over the past decade or so in his personal life. I see he is appearing in a documentary based on the film called “After The Navigator” which comes out next year. I may or may not catch this at some point. I doubt very much they will manage to get Sarah Jessica Parker on board for this as her career soared in the late 1990’s and early 2000’s. If you haven’t seen this film, I would give it a bash as it’s harmless and entertaining. Recommended.