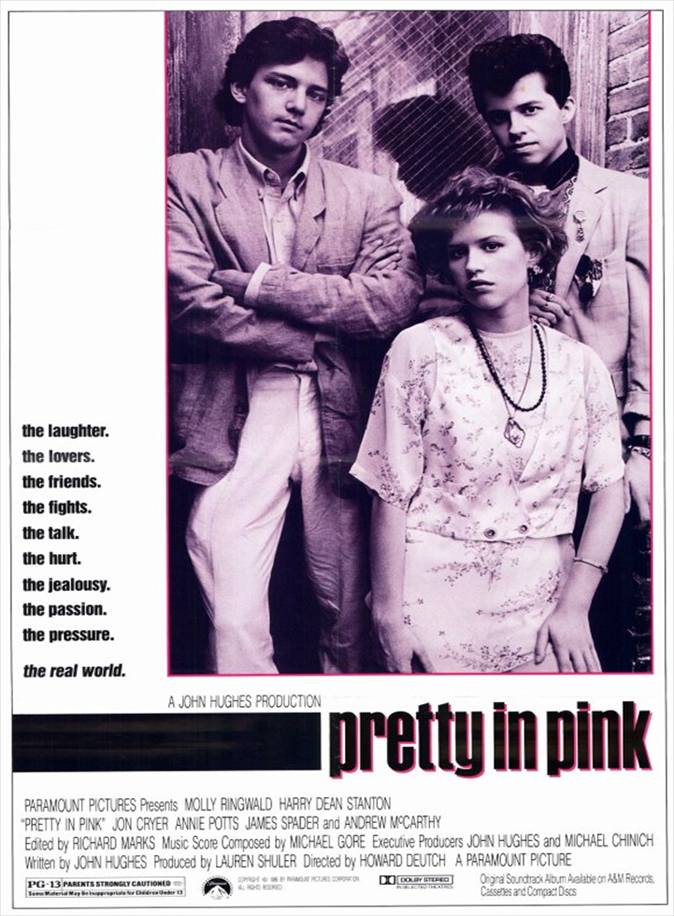 I was 10 years old when Pretty in Pink was released and it wasn’t until the early 1990’s in my mid teens I finally got round to seeing the John Hughes classic. Pretty in Pink is about a girl from the wrong side of the tracks called Andie (Ringwald) who must choose between the affections of her doting childhood sweetheart “Duckie” (Cryer) and a rich but sensitive playboy named Blane (McCarthy) It’s fair to say that Pretty in Pink optimises the 1980’s with it’s terrific soundtrack, fashion and most of all it’s ideology and class beliefs in a decade fascinated with possession and finance. I also think it’s fair to say stripping all of these element away lies a story about never judging a book by it’s cover and attempting to break down the social barriers of the time. Although, the film doesn’t exactly revolutionise the way people were in the 80’s or change their perceptions on each other, it’s message is loud and clear.

John Hughes as a writer was untouchable in this period in his career. He has already bagged a comedy classic 3 years previously in National Lampoon’s Vacation. Sixteen Candles (1984) a year later and followed that up with the classic The Breakfast Club (1985) He would continue to remain consistent in his writings after Pretty in Pink to with Ferris Bueller’s Day Off (1986), Planes, Trains & Automobiles (1987), The Great Outdoors (1988), Uncle Buck (1989) and reached his creative powers and peak with the 1990 comedy classic Christmas film Home Alone. Hughes in his mid to late 30’s understood the youth of the day. He also understood character development and relied on a portion of “The Bratt Pack” in his Directorial films also to fulfil his vision. I think it is fair to say that he created memorable characters throughout this period and in Pretty in Pink he manages to achieve this.

Molly Ringwald as Andie is conscious of the fact that her social circles are beginning to mingle with the more prestige dwellers of High School and in Blane she realises that stripping back the fancy houses and cars that the character that Andrew McCarthy portrays is a likeable and honourable chap. Of course there will be a price to pay for both Andie and Blane as the story unfolds later on. Especially with the despicable Steff played by a very youthful James Spader who is hellbent in reminding Blane of the Code of Conduct amongst “their own” and not to get too attached to the poorer Andie. This is what Pretty and Pink manages address throughout the movie. The sub story behind this is the relationship between Andie and Duckie. I think Jon Cryer did a great job as the doting “friend” to Andie. He would do anything for her and it’s almost heartbreaking to see the character carry such a happy go lucky persona throughout, even when you know inside he is in love with Andie, who is totally unaware of his feelings and sees him as a friend and nothing more. Ringwald, McCarthy, Spader and Cryer are the main characters throughout and its easy to forget that Molly Ringwald was only 18 when she did this movie with the others in their mid 20’s.

Supporting the Quartet is the brilliant Harry Dean Stanton as Andie’s Father Jack. Both abandoned by Andie’s Mother a few years previously to the events of the film Jack is struggling to cope with raising a teenage daughter and as the film wears on his relationship is slipping away from him. Harry Dean Stanton sadly passed away just under a year ago at the age of 91 and his acting, charisma and screen presence throughout his 50 year career will never be forgotten. Annie Potts plays Iona, a friend a work colleague to Andie (Both work in a local Record Store) and this is where you hear most of the soundtrack playing in the background with one of my favourite songs of the day from Echo and the Bunnymen “Bring on the Dancing Horses” Potts plays the supporting a loyal friend to Andie and does a fine job with some quick witted lines that are razor sharp and brutal to the recipient.

Overall, Pretty in Pink perhaps doesn’t have the darker edge that The Breakfast Club had, but it certainly has the social conscience that the audience could take from it and understand the struggles of social prejudice and the impact it had on relationships with friends and lovers in this movie. The character of Blane manages to ensure that the audience doesn’t hate on the more well to do members of society as he is seen as a level headed youth with morals that move away from the possessions and bank accounts of his peers. Andie represents the underdog and is the most relatable character to the audience. John Hughes’ writing is clever and thought provoking here. His understanding of the teens of the 1980’s cannot go unnoticed in this movie and although the underlying issues have been present from the day dot he manages to incapture this in Pretty in Pink. The Humour is just about right also and Cryer has most of the lines in this case and shows even this early in his career why he is regarded as a talented and funny man. If you are unfamiliar with John Hughes work I would probably suggest watching his movies in chronological order and you will see his talents develop with every movie and by the time you get to Pretty in Pink you will be wanting more. Recommended.