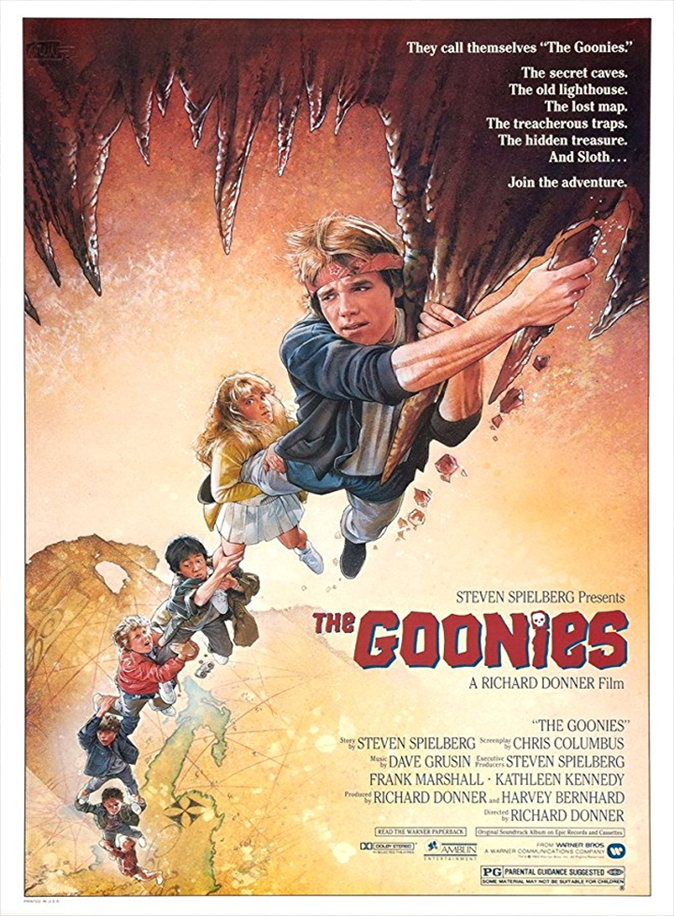 The Goonies is in my Top 5 best films of the 1980s. I think I could recite most of the dialogue from this movie and in the correct order is how much this became an obsession for me aged 9. I’m not even sure I was allowed to be watching this at that age. Yes it’s about a group of kids called The Goonies who go on one last adventure before the foreclosure of their homes to pave way for a Golf resort and In order to save their homes, these group of misfits set out to find a pirate’s ancient valuable treasure.

I’m telling you we must have been a lot tougher in my day because some of the content in this movie would be too scary or adult themed for the kids of today. Well I’m beginning to sound like Mama Fratelli here so here goes my review. I think this was the first movie I saw Josh Brolin appear in (Yes the guy who would become Thanos) and he plays older brother Brandon Walsh who has just flunked his Driving test and although that is a big deal, it was earth shattering back in the material 1980s. Brolin does exactly what it says on the tin, plays the big brother and to none other than another actor who would go on to do some pretty big things in Middle Earth nearly 30 years later. I am talking about Sean Astin here who plays the asthmatic ridden Mikey Walsh and more or less the leader of The Goonies.

Making up the rest of the cast is Jeff Cohen as the hilarious Chunk, Corey Feldman as the wise talking and Spanish interpreter Mouth, Kerri Green as Andy, Martha Plimpton as Stef, Jonathan Ke Quan as Data, John Matuszak as the loveable Sloth, Robert Davi and Joe Pantoliano as the Fratelli Brothers Jake and Francis and their hardened Mother Mama played by Anne Ramsey. This is probably one of the best lineups of all time in terms of most of the cast at this point were predominantly unknown but somehow the casting here was lightening in a bottle. Cohen as Chunk should have had his own standalone film. A natural comic and excellent timing and delivery on all of his lines justified more Chunk screen time. The brilliant Corey Feldman shines as the wisecracking but charming Mouth who has to have the last word every time. Jonathan Ke Quan as Data is there for the slapstick. Some of it works and some of it doesn’t. Nevertheless Ke Quan is as pivotal as the rest and this role perhaps shook off the ‘Short Round’ label from the previous years “Temple of Doom”.

They make up The Goonies and alongside Green, Plimpton and Brolin who play the grownup kids throughout the adventure are up against The Fratellis who are on the run and hiding out in an abandoned restaurant on the coast which just happens to be the beginning of trail for the pirates treasure. The villains of course are hot on the pursuit of The Goonies when they get wind of the prize that lays waiting for them at the end of the trail. This scenario carries the film throughout after a slower opening and more comedic first twenty minutes, this movie moves darker into a murdered body in the cold storage in the abandoned restaurant (The Fratellis Handy Work), deathly booby traps and skeletons.

Richard Donner is one of my favourite Directors of all time and his handling of the shift in tone is perfect and natural. It doesn’t feel like a different movie after those first twenty minutes. It keeps the humour the same, only the stakes are higher and a more frantic pace picks up. The writing of both Steven Spielberg and Chris Columbus are very evident here. You could say that The Goonies is more a child like version of an Indiana Jones film. Spielberg just off the back of two successful Indy films appears to be still in the zone for adventure films and Chris Columbus I’m sure achieves a screenplay fit for Spielberg’s writings.

Overall The Goonies has stood the test of time because of its writings and how the screenplay transcends onto film. Great character understanding and relationships is also a key element in its success. Especially the Chunk / Sloth relationship that will make you laugh one minute and cry the next. The film is a rollercoaster action adventure with great comedy and some darkness thrown in for good measure. IMDb appear to be clinging onto a Goonies 2 and to be honest I’m unsure if I would like that or not. Somethings are best just left the way they are. If you haven’t saw a The Goonies yet, where have you been? I can’t recommend this movie enough. A must see.