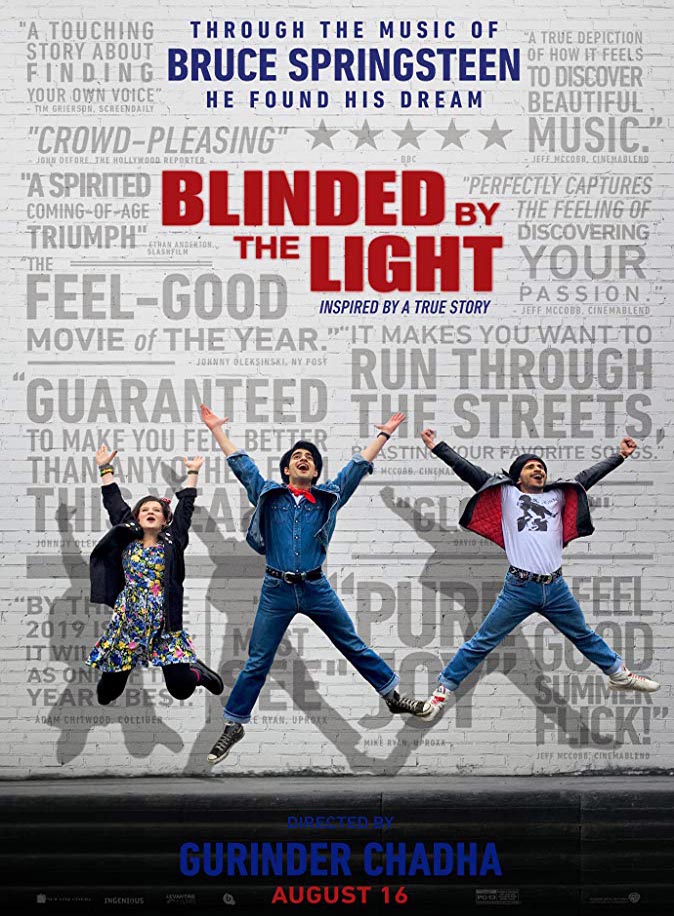 We’ve been spoiled for choice this year by British movies about rock icons, but this is a very different animal to Bohemian Rhapsody and Rocketman. This isn’t a biopic of Bruce Springsteen but The Boss’s music does provide the inspiration for our lead character to change his life and dream bigger.

It’s 1987 and teenager Javed seems to have his whole life mapped out by his father. His dad tells him which career paths are acceptable and tells him he will find his son a wife when the time is right. The members of the family who work give their wages to the father without a second thought. Javed wants to carve his own path in life, but in Pakistani tradition, the father is the head of the house and his word is law.

But then a chance meeting at school with another student introduces Javed to the music of Bruce Springsteen, and to say he embraces it wholeheartedly would be an understatement. Springsteen’s music and lyrics show Javed the poetry of everyday lives, of quiet heroes, and working class dignity. Pretty soon, those dreams Javed had of being a writer seem a lot closer and more attainable.

It’s a very sweet coming of age story that I really empathised with. When I discovered music in my teenage years it was a revelation, and I always thought I got more out of it then most people. Music wasn’t just something that played in the background, it had something to say to me, personally, and that’s the same feeling that grips our young hero. This music teaches him to think, to dream, and to challenge his father’s preconceptions of who and what he should be.

The film evokes the 80s with real joy. Anyone who grew up in that era will smile when they see sweets, foods and drinks (who remembers Top Deck!) associated with the decade. These little touches add so much to the overall look and feel of the story. There’s also a great soundtrack – it’s not all Springsteen – and the fashions and cars add the finishing touches. This film gave me a peek inside a culture I admit I know very little about. It’s not all big hair and walkmans playing cassettes, the racism that was rife in Thatcher’s Britain is addressed and shines a light on how Pakistani families were treated during the height of the National Front’s hate campaign. I wish I could say it shows how far we’ve come but recent events show it’s not nearly far enough.

The film doesn’t have a huge third act finale, but since this screenplay is based on a true story I suppose what happens is what happened. It’s quite a talky, yet still emotional, ending that provides closure to the coming of age arc, and the final shot did bring a lump to my throat.

Viveik Kalra is fantastic, proving a likeable and engaging lead. He has the acting chops to make you share his wonder as the lyrics of New Jersey’s finest fill his head, heart and soul, as well as bringing a lump to your throat when things go awry. His love interest is Nell Williams, who played the young Cersei Lannister in season five of Game of Thrones. She plays a teen activist embarrassed by her Tory parents (and rightly so), and throws herself into the spirit of the thing with another strong performance. There’s some familiar faces in the supporting cast too, like Captain America’s Peggy Carter – Hayley Atwell, and TV favourites Rob Brydon and Sally Phillips.

I think most people consider Bend It Like Beckham to be Gurinder Chadha’s best film. Since I don’t have any interest in football it never really scored with me… not like this one did. This is a film I suspect I will watch many more times, and if you’ve ever heard a song and thought it was being sung just for you, you should watch it too.

Despite some dark themes and moments, the overall feeling this film left me with was a joyful one. It will make you laugh, smile, and maybe even break into a spontaneous dance (in the dark?) wearing your orange headphones. I’m only a moderate fan of Springsteen but even I came home and stuck on the Born in the USA album because this film’s enthusiasm is infectious.