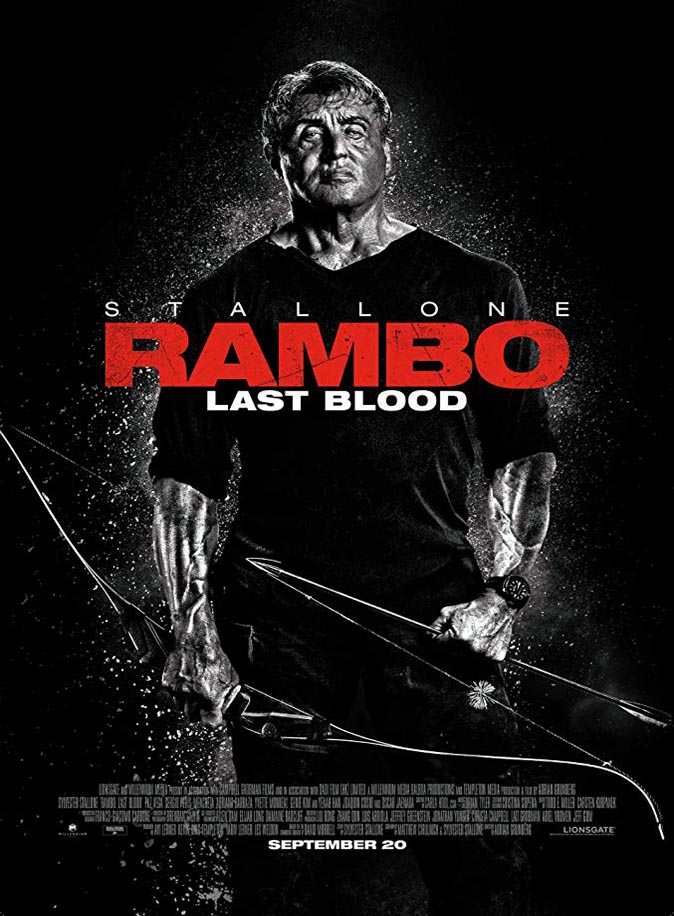 When we last saw Rambo, John J. was back on US soil walking down a long lane to his family ranch. He had just killed a Burmese warlord and a small army with a mini-gun and rescued some well-meaning but naïve missionaries. It looked like he was hanging up his crossbow and putting those days behind him for a quiet retirement.

But the franchise gods are never that kind.

It’s ten years later and Rambo is still living on the ranch with a single mother and her daughter. The nuts and bolts of how this living arrangement came to be are never fully explained, but we get the crucial piece of information that after the girl’s real dad left, Rambo has been like a father to her. But as is often the case in these movies, no matter how many horror stories the kid is told about their deadbeat dad, they still feel the need to meet him face to face and ask him why he left. So when Gabrielle (Yvette Monreal) tells her Uncle John that she’s got an address for her dad in Mexico and wants to go see him, we know this isn’t going to end well.

Not only does her dad turn out to be just as horrible as she was led to believe, but soon after meeting him she gets abducted and forced into a prostitution ring in Mexico. So it’s time for Uncle John to come to the rescue, right? Well sort of. Rambo isn’t as young as he used to be and his first rescue attempt doesn’t quite go to plan.

I don’t want to go into every beat of the story, but suffice to say, Rambo, ends up getting on the wrong side of the heads of this prostitution ring and lures them back to his place in the US where he has a large collection of booby traps waiting for them.

It’s a simple structure; for the first hour they set up a reason for Rambo to kill bad guys, and in the last half-hour he kills those bad guys in the most brutal and sadistic ways possible.

Unlike other parts of this franchise, this one actually evokes real emotion. There is a couple of lump in the throat, wipe the eye moments, but it doesn’t hold back on the violence either. The 2008 movie was some of the most violent killings I’d seen on-screen for a long time and Stallone obviously felt he had to live up to that again.

It’s a lean ninety minutes of vigilante justice dispensed with a Vietnam veteran’s twist and though Stallone is seventy-three now and his face looks like a set of saddle-bags, he’s still a formidable presence on-screen and Rambo is still a guy you wouldn’t want to get on the wrong side of.

During the end credits, we get a brief recap of all the movies in the franchise, including the one you’ve just watched, which may seem a little redundant, but then it carries on with a little epilogue. So if you want to see if Rambo lived to fight another day, stay until after the recap.

I think everyone knows what to expect when they see a Rambo movie, and in that respect, I think this one lives up to the best parts of the series. The emotional connection with Gabrielle and her mother, and the side plot about a journalist (Paz Vega) trying to expose the gang gives it a little more depth than the non-stop action films and gives Rambo a more personal reason to take revenge than he’s had in a long time. So if you like seeing low-life human traffickers get what’s coming to them, you won’t be disappointed.