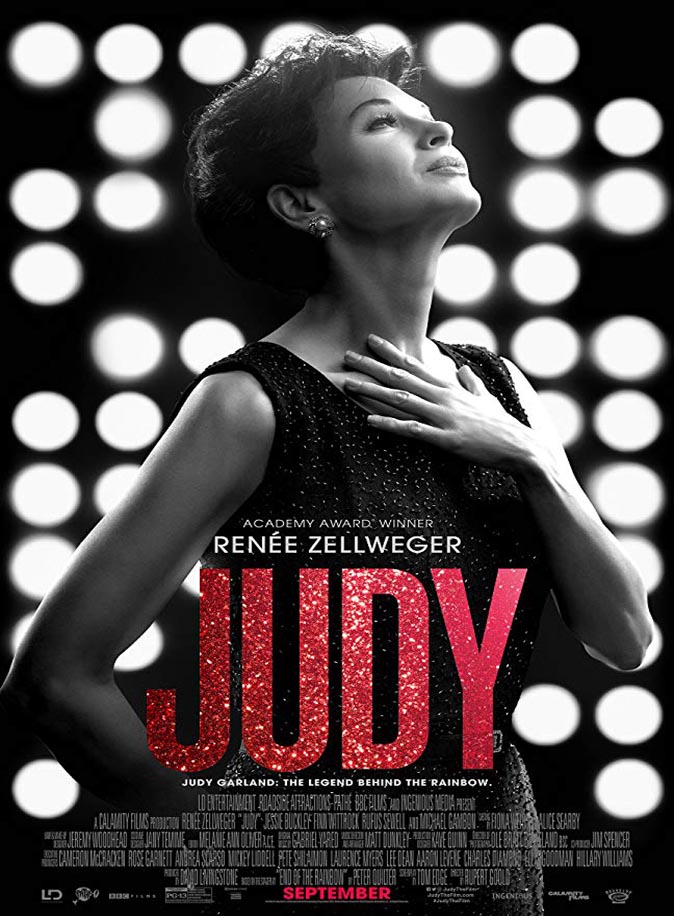 Right away, this film makes one thing quite clear: Judy Garland was doomed from the start.

The opening scene sees young Judy on the set of The Wizard of Oz, torn between choosing stardom or life as a normal child. Mentor Louis B. Mayer lays it out with the tone of the loving parent – which she never had – but the words of a cold, calculating businessman, essentially saying she’ll amount to nothing without him.

Thus began the journey down that yellow brick road which would ultimately lead to Garland’s death at the age of 47.

But Judy doesn’t chronicle her downward spiral. The film focuses on the final months of her life, when Garland (Renee Zellweger) is a physical and emotional train wreck. She’s alarmingly unhealthy, dependent on booze and prescription drugs to keep going. She loves her two children but is essentially homeless and can’t take care of them, ultimately losing custody to her most recent ex-husband, Sidney Luft (Rufus Sewell). And despite still possessing a tremendous singing voice, Garland is virtually unemployable.

Until she’s offered a series of shows in London, where she’s still very popular. Initially reluctant, she takes the offer but proves to be wildly unpredictable both on and off the stage. Despite efforts by hired assistant Rosalyn (Jessie Buckley) and soon-to-be-fifth husband Mickey Deans (Finn Wittrock) to keep her focused, Judy slips further into drunkenness, depression and mental exhaustion, burning most of her remaining bridges along the way.

But rather than focusing on the more lurid aspects of this time in her life, Judy presents its subject as the tragic figure she really was. Just a few key flashbacks of her childhood – every aspect of it controlled by studio moguls, including her drug use – renders the entire film rather heartbreaking. As presented here, all Garland ultimately wanted was to love and be loved. But in the end, little was left but self-pity and remorse.

Much has already been written and said about Zellweger’s affecting performance, which is indeed the main reason the film rises above its fairly rudimentary screenplay and some suspicious contrivances to press all the right emotional buttons. Playing Garland as bitchy and endearing, forceful and needy, it’s a complex portrayal that goes well beyond mere caricature. She also does her own singing and if you squint hard enough, her resemblance to Garland is sometimes uncanny (especially when she’s on stage).

Zellweger has already won a few awards for her performance, as well as a Golden Globe Nomination. At this point, yet-another Oscar nod appears to be in the bag, too. Since biographic dramas usually sink or swim with their star, all of those accolades are well-deserved. She gives Judy the poignant punch needed to make it memorable.