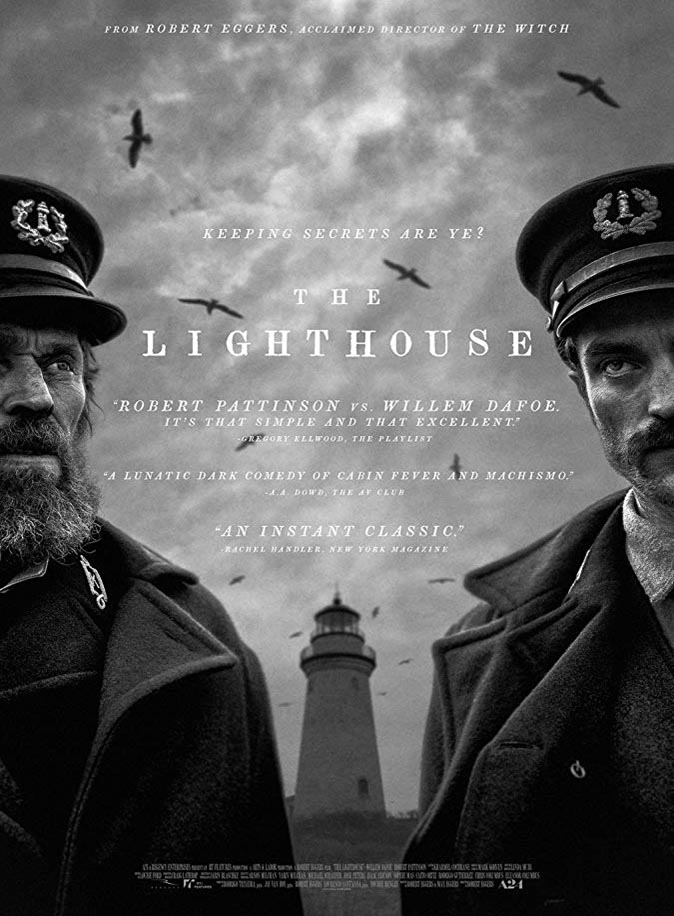 Watching The Lighthouse, I couldn’t help but think this is the aesthetic approach Stanley Kubrick should have taken with The Shining, especially since he jettisoned most of the supernatural aspects King’s novel, anyway. Of course, we all know Kubrick was probably not capable of such minimalism.

Robert Eggers is, though. Shooting in chromatic black & white in a nearly extinct aspect ratio (1:19) establishes an oppressive, claustrophobic tone right away. We feel the isolation of the film’s only two characters before we even meet them: crusty, cantankerous lighthouse keeper Thomas Wake (Willem Dafoe) and newly hired-hand Ephraim Winslow (Robert Pattinson), the latter of whom appears to be trying to escape his past.

A 19th Century New England lighthouse is already an ideal setting for a horror film, even more so for depicting a descent into madness, which is ultimately scarier than less tangible terrors. But what’s interesting about The Lighthouse is – if one were so inclined – it could still be taken on face value as a supernatural horror film. But what would be the fun in that?

Instead, the isolation slowly drives Wake and Winslow mad, exacerbated by their already adversarial relationship, no-small-amount of booze and a storm that delays the monthly supply ship. However, since Wake already seems a few cans short of a six-pack, maybe it’s only Winslow who’s losing his grip on reality. The story unfolds from his point of view and the increasingly disturbing hallucinations are all his. One could even go out on a limb to suggest Wake himself is just another product of Winslow’s delusions. A relatively weak argument, but there is some circumstantial evidence.

And if Eggers’ The Witch veered from the beaten path, The Lighthouse doesn’t even set foot on it. In the disc’s behind-the-scenes documentary, Pattinson stated he was looking for something weird. Well, young sir, mission accomplished. Nearly every aspect of the film – both visually and narratively – is fascinatingly bizarre, reciprocated by all-in performances from both leads. Dafoe’s no stranger to such roles, but Pattinson is turning into a really interesting actor, something none of us would have predicted 10 years ago.

All of which means The Lighthouse is likely to spark plenty of love-it-or-loathe-it debates, which automatically renders it a unique film worth checking out by adventurous horror fans. Unpredictable, maddening, ambiguous and surreal – even quite funny, on occasion – one thing the film definitely isn’t is boring.