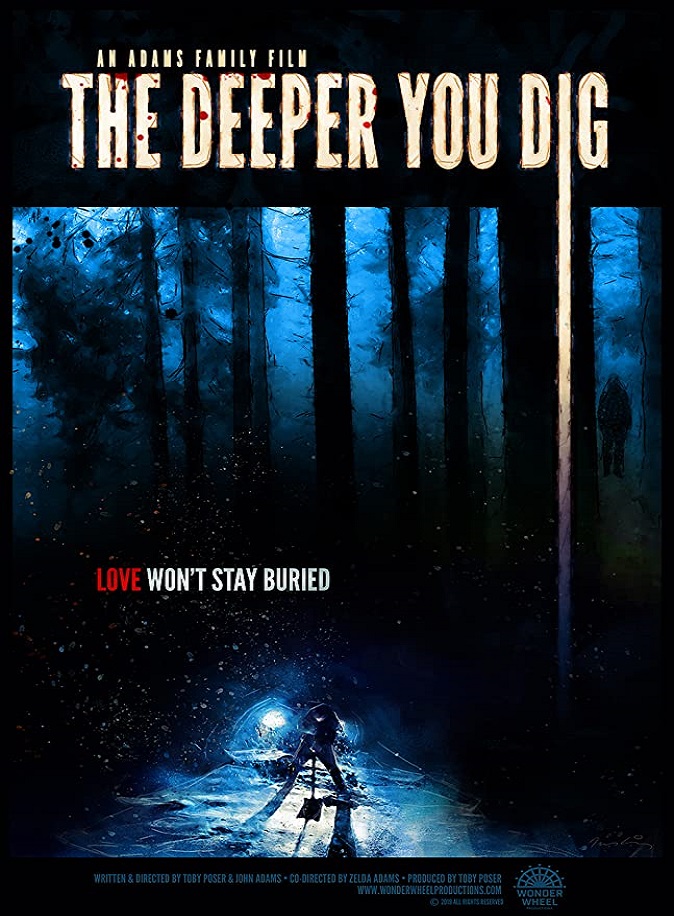 How’s this for a family film? The Deeper You Dig is written, directed and scored by the husband-wife team of John Adams and Toby Poser, who also cast themselves and daughter Zelda Adams in the three main roles. But this low budget feature isn’t another grassroots, self-indulgent exercise in nepotism. It happens to be a helluva horror film.

Ivy (Poser) is a single mom who lives in a remote country home and makes a living doing phony tarot readings for gullible rubes while taking care of her emo teenage daughter, Echo (Zelda Adams). Their closest neighbor, Kurt (John Adams), spends his days trying to renovate a dilapidated farmhouse. One snowy night, a drunken Kurt runs-over Echo in his truck. Horrified, he decides to bury the mangled body, but when she suddenly regains consciousness, he reluctantly finishes the job. Now he’s a murderer.

Ivy tries to find her missing daughter, even consulting her own tarot cards, as well as a medium with a mysterious box that gives her bizarre visions. She also confronts Kurt himself and the two develop an uneasy relationship. Meanwhile, he keeps having to move the body, eventually cutting it up and tossing it into a well. But despite being dead, Echo isn’t quite finished with Kurt, tormenting him from beyond in an effort to coerce a confession.

Well-written and atmospheric, The Deeper You Dig effortlessly segues from psychological to supernatural horror, belying its tiny budget with suitably bleak locations and occasionally grotesque imagery, enhanced by sparse-but-imaginative special effects. The narrative grows increasingly surreal and hallucinatory, which may be disorienting, yet still very compelling. Besides, since when did great horror always need to be coherent? Good characters help…a lot, in this case. Kurt’s actions are reprehensible, but he does express a ton of remorse. Increasingly helpless as things spiral out of control, part of us might even sympathize with him (however briefly). Similarly, Ivy isn’t entirely lovable. She makes a living by taking advantage of others, but is still a loving mother suffering the worst pain imaginable. In other words, they’re real people, with Adams and Poser hitting all the right notes in their portrayals.

Smart, imaginative and exceedingly dark, The Deeper You Dig is a creepy little gem, methodically building dread before culminating in a bloodsoaked climax. That it was mostly accomplished by one resourceful family makes it all-the-more impressive. This one is well-worth seeking out for horror fans looking for something different.