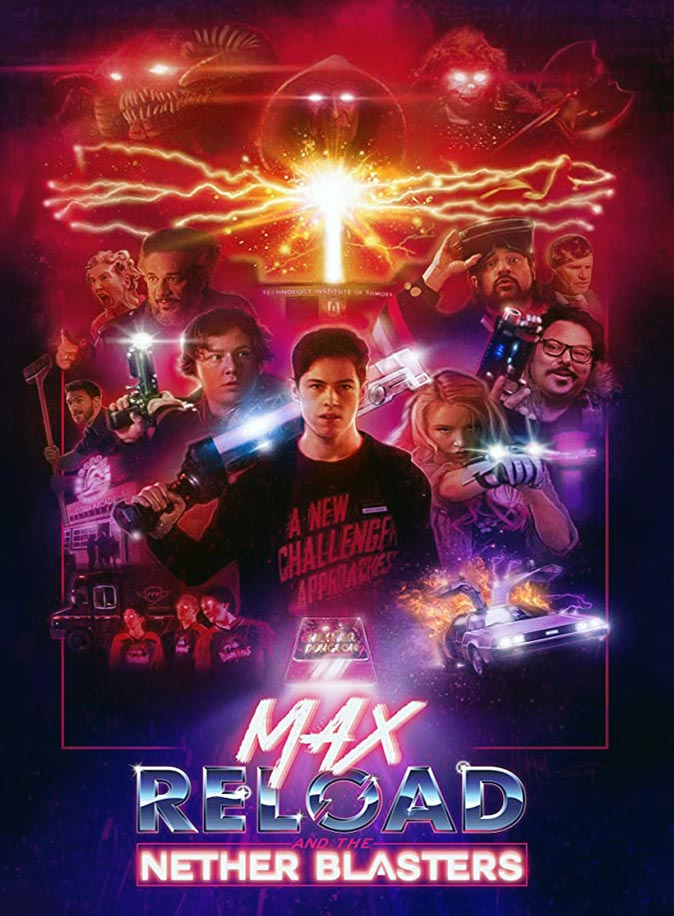 For those who missed-out on the movement, hard-core online gamers are a funny bunch. As someone who works around young adults in the real world, I’ve met more than my fare share, from Fortnite fanatics to Minecraft masters. The worst of them display a level of arrogance over their virtual skills that might be laughable to flesh-&-blood mortals forced to interact with more than their thumbs.

So while the main character of Max Reload and the Nether Blasters is self-absorbed, overbearing and generally unpleasant, at least he’s plausible. Gaming culture ain’t exactly a challenging satiric target, but those in-the-know will appreciate the fun being had at their expense. For everyone else, the film wavers wildly between clever and stupid, all filtered through a lens that suggests its directors consider the 1980s to be Hollywood’s Golden Age, with Tron as the decade’s Citizen Kane.

Cocky teen Max (Tom Plumley) plays online all day, while working at a gaming store at night (always showing up late). A budding designer himself, he worships legendary game creator Eugene Wylder (Greg Grunberg), whose “Nether” series was an ‘80s phenomenon until he became a victim of his own success and disappeared. One night, a mysterious man comes into the store and gives him the only known copy of the next game in the series, which never got released.

After beating the game in one sitting, Max uploads it to the internet, which unleashes a demonic force bent on taking over the world by possessing those who play it. Along with friends/co-workers Liz and Seth (Hassie Harrison & Lukas Cage), Max tracks down Eugene (who now lives with his mom), hoping he has some ides on how to save everybody.

The plot itself is perfunctory and predictable, stylized by an ‘80s aesthetic – right down to the score and special effects – that somehow befits the story. However, the real fun is when the film is poking fun at video game conventions and the obsessives who love them. While the teenage characters are serviceable and well-performed, Grunberg steals the entire movie. Arrogant, bitter and pretty pathetic, he’s absolutely hilarious. Kevin Smith (as the game store owner) and Martin Kove (playing Max’s goofy grandpa) also have funny moments, though their roles are essentially glorified cameos.

Alas, much of this is only going to be amusing to gamers who “get it,” or at-least people familiar with the culture. There might also be some additional appeal to old school nostalgics who recall the days of yore when Colecovision briefly threatened Atari’s reign in the 80s. With the exception of a few great comic performances that transcend the subject matter, most ordinary folk’ll sit stone-faced through a majority of it.