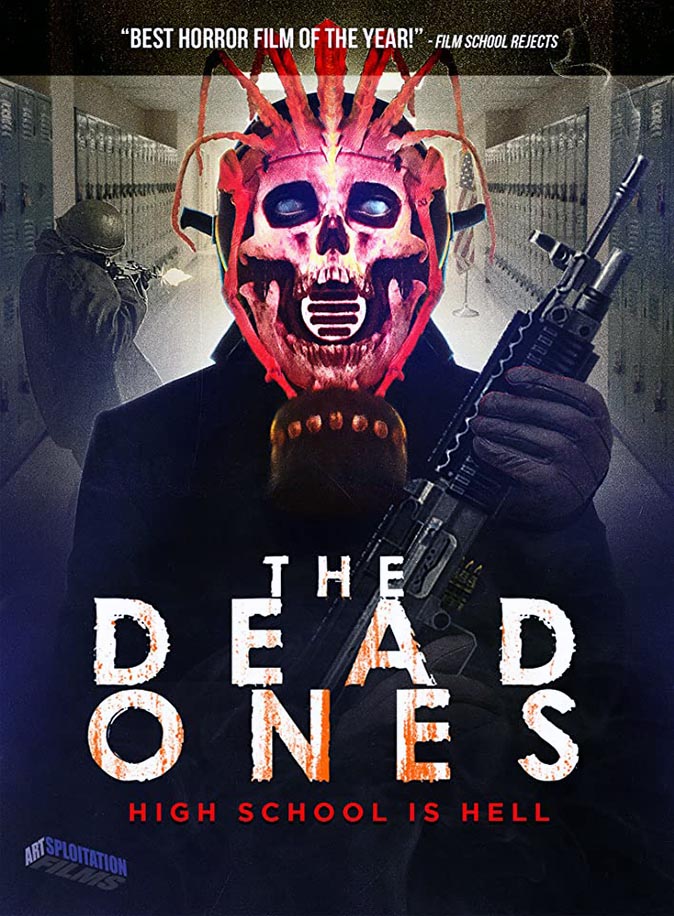 Be aware that the premise of The Dead Ones centers around a mass school shooting. One might consider exploiting such a terrible event for the sake of a horror film to be in phenomenally bad taste, to say nothing of socially insensitive. And it would be if the film were actually exploitative.

Four mostly unlikable teens are forced to serve detention by cleaning up their entire school in the aftermath of a tragedy. Not only is it an obviously impossible job, they are forced to do it in the dead of night and the teacher who assigned their detention appears to take a bit of sadistic enjoyment in their punishment.

Concurrently, some masked individuals – representing the Four Horsemen of the Apocalypse – chain all the doors and windows before breaking into the building and setting various traps. Meanwhile, we get to know the detention kids a little more. Only one of them, ‘Mouse’ (Sarah Rose Harper), appears to display anything resembling empathy, especially regarding bitchy bipolar classmate Emily (Katie Foster), who’s prone to self-mutilation. The two boys, Scotty & Louis (Brandon Wilson & Torey Garza), are antisocial delinquents. It isn’t long before horrific things – real or imagined – begin happening to all of them, none of which appears to be perpetrated by the masked invaders.

By the time the narrative introduces vivid flashbacks of a mass shooting at the same school, it doesn’t take a genius to figure out who’s actually behind the masks or the purpose of these kids’ so-called detention. The school siege is bloody, brutal and – in light of similar real-life tragedies – difficult to watch. However, the film is not-so-much about the shooting as it is a supernatural tale of retribution and, to a lesser extent, redemption.

Those not put-off by the premise will find a lot to love here. A dark, oppressive tone dominates the entire film, enhanced by atmospheric production design and cinematography. The four main characters are well-drawn and convincingly depicted by its young cast (they speak and behave like actual teenagers who are inherently self-absorbed). Considering what I assume was a limited budget, the film also boasts some haunting imagery and imaginative special effects.

Visually and narratively surreal, it’s almost like being dropped into the middle of a fever dream. Seldom in-your-face scary, The Dead Ones builds tension through atmosphere and a creatively disorienting storyline. Despite the inevitability of its plot revelations, the film masterfully instills dread and concludes with a denouement that more-than-justifies the off-putting premise. That’s something pure exploitation is incapable of.