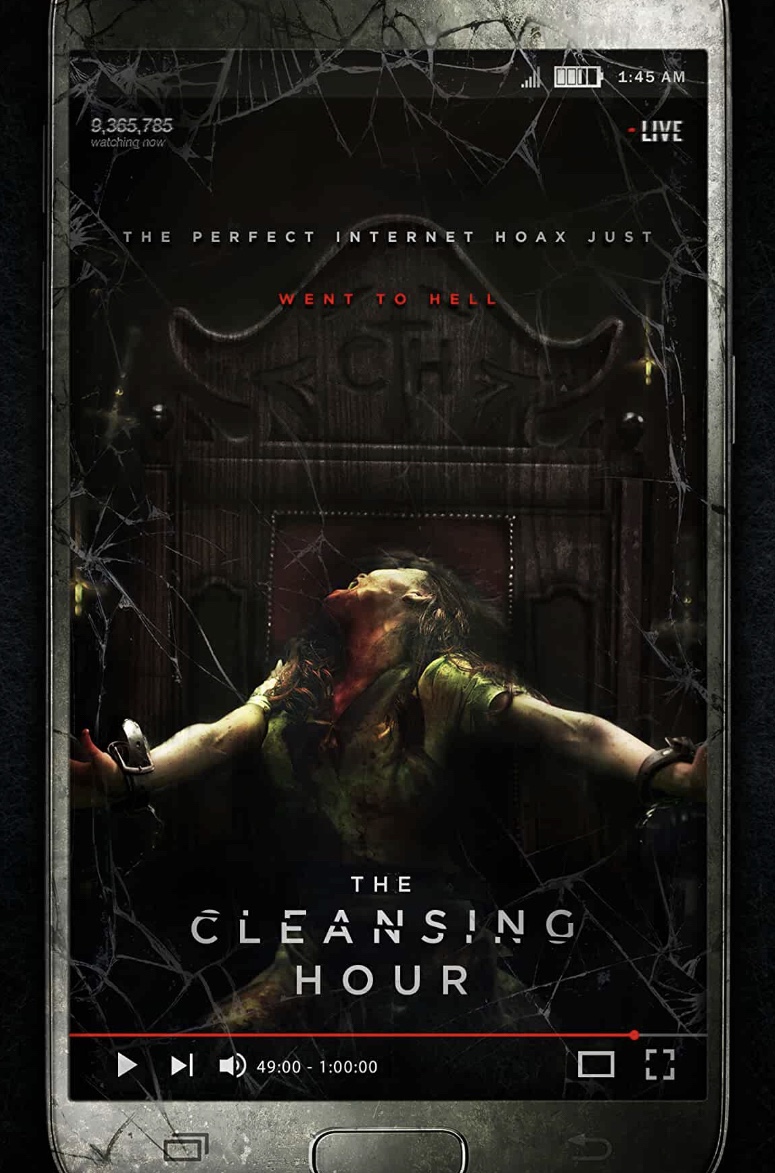 I wouldn’t quite call myself an atheist, but you know what would totally cement my belief in a higher power? If God suddenly stormed the stage during one of Joel Onsteen’s performances to call him on his bullshit. Or better yet, if the devil himself showed up and challenged Joel to a rap battle, the stakes being the millions in hiss bank account (since he probably doesn’t have an actual soul to wager).

Since I’m stuck relying on plain old faith like every other poor rube, one of the more satisfying aspects of The Cleansing Hour is we get to vicariously enjoy one of these opportunistic bastards exposed for the whole world to see. Granted, a few innocent folks die along the way – horribly – but you can’t make an omelette without cracking a few eggs.

On his weekly livestream show, also called “The Cleansing Hour,” Father Max (Ryan Guzman) vanquishes demons through exorcism. However, he ain’t a real priest and the ‘possessed’ are just hired actors. Max is actually a self-absorbed, fame-obsessed, womanizing, party animal who leaves it to childhood buddy Drew (Kyle Gallner) to do all the grunt-work for the show. So when the next ‘guest star’ fails to appear for the show – killed by a demon – Drew coaxes his girlfriend, Lane (Alix Angelis), to fill in.

This is where the fun begins. Lane’s extremely convincing at playing possessed because it turns out she really is. There’s a genuine demon inside her, which takes over the production and threatens to kill Lane unless Max does whatever it demands…live on camera. Not only is Max subjected to nasty physical torment, he’s forced to admit he’s a fraud and confess some pretty awful sins of his past. Meanwhile, he’s being watched worldwide by an increasing number of viewers.

While The Cleansing Hour isn’t all that scary, it’s a hell of a lot of fun. All the usual possession tropes are hauled-out on cue, but the scenario puts an interesting spin on things. The film is fast-paced, violent and often very funny, anchored by a great performance from Guzman, who manages to make Max both despicable and sympathetic. There’s also some social commentary here and there, mostly related to the sweeping influence of social media, as depicted through a variety of secondary characters watching the show.

Speaking of which, there’s a surprise ending that viewers will either find ominous or funny as hell (depending on how seriously one takes the premise). Either way, The Cleansing Hour comes to a great conclusion, capping-off one of the better possession horror films I’ve seen lately. And if nothing else, at least we get to see a religious profiteer get what’s coming to him.