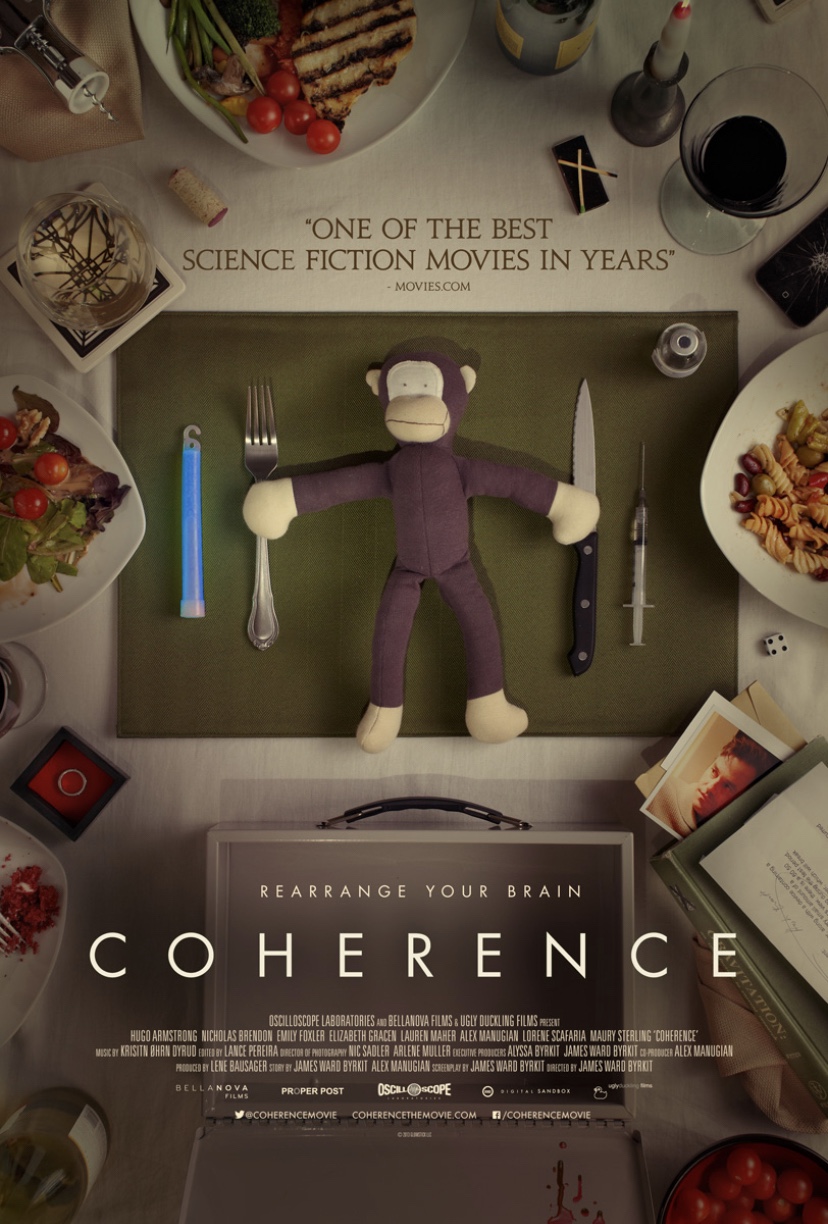 Despite a (deceptively?) mundane start, Coherence shapes up into one of the more intriguing sci-fi mindbenders I’ve seen in a long time, yet I’d never heard of it until now. Where the hell has this movie been?

Digging up a little background information afterwards (which included checking-out the disc’s behind-the-scenes doc) makes it even more impressive. Coherence is the first – and so-far only – feature film by James Ward Brykit, best known for co-writing Rango and working on a few Pirates of the Caribbean flicks as a conceptual artist. Produced for roughly $50,000 with almost no crew, the dialogue is largely improvised by a solid cast, none who were given the complete plot picture. That means they’re often as surprised by turns-of-events as we are.

And rest assured, Coherence is loaded with surprises. The premise has 8 friends meeting for a dinner party while a strange comet passes near Earth. Things seem deceptively normal at first, the conversations fairly innocuous. Then cell phones start losing signals and literally breaking. Soon after, the power goes out everywhere, save for a house down the street. A few venture over to investigate, but long-story-short, the people in that house turn out to be themselves.

This is where the story gets interesting, to say nothing of exponentially complex. Without going into specifics that would spoil the party, the comet seems to have opened some kind of rift between multiple parallel worlds. Not only that, their other “selves” have also been exploring the phenomenon, trying to figure out what’s happening. The narrative grows increasingly twist-laden as the group tries to work the problem, their trust in each other diminishing when it becomes obvious that not everybody in the room is exactly the same person they sat down to dinner with. Occasionally, not even the viewer is certain which group of friends we’re watching.

Yet at the same time, Coherence is seldom ambiguous or overly confusing. During moments it does choose to confound the viewer, the film ultimately follows-through with revelations that are not-only eye-opening, they make complete sense within the context of what’s already transpired. Swapping-out spectacle & special effects for convincing characters & intriguing ideas, this wonderful sci-fi obscurity deserves to find a wider audience.