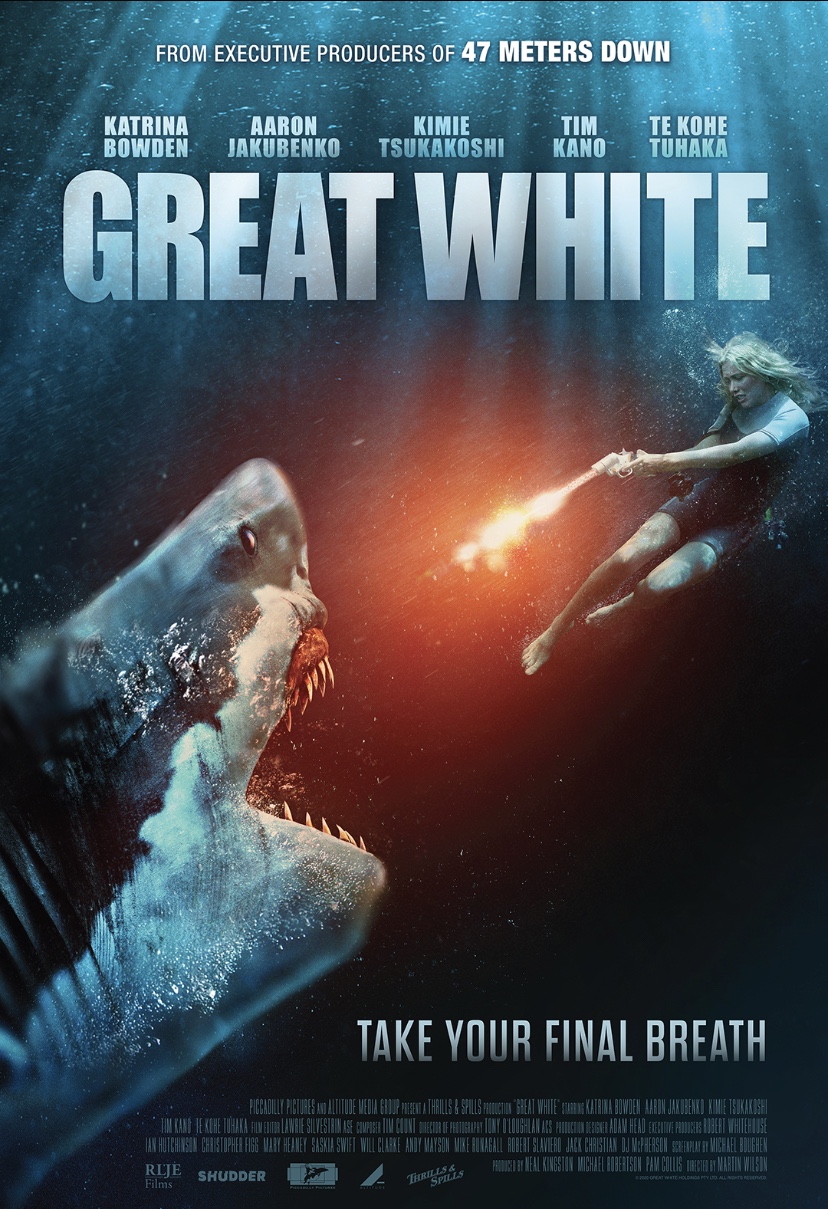 In the great shiver of shark flicks that have swum through theatres, video stores and streaming services over the last 46 years, Great White is as unremarkable as its generic title. It doesn’t come close to the visceral terrors of Jaws – what does? – nor is it as wilfully ridiculous as Sharknado.

Nothing about it really stands out…no remarkable performances, no unique characters, no particularly memorable attack scenes. One could say Great White is to shark movies what the Hallmark Channel is to Christmas flicks. My wife can’t get enough of those during the holidays, despite most being pretty-much the same. Similarly, fans who frequently feast on films with fearsome fish should enjoy this one (and forget about it almost immediately afterwards).

Actually, “Great Whites” would be a more accurate title, since the film features two of the titular creatures. The story has sea-plane charter pilot Charlie Brody (a possible homage?) and girlfriend Kaz flying a married couple to a nearby island. We’ve seen this couple before: Joe is quickly established as a brash, obnoxious jerk, while Michelle is the exact opposite, kindly and soft-spoken. So yeah, we’re pretty sure within five minutes of meeting them which one is likely to survive to the end and which will end up as fish food. As for Brody’s easy-going assistant, Benny…since he doesn’t serve any real narrative purpose, self-respecting connoisseurs of shark cinema already know he’s a dead man walking (or swimming).

After landing on the water to check out a wrecked boat, a shark attacks and sinks the plane. Everyone manages to escape into an inflatable raft. However, they’re miles from any nearby land and nobody knows where they went down. The remainder of the story consists of their fight for survival, complicated by a lack of fresh water, a sinking raft, Jackass Joe and, of course, two hungry sharks. Overall, the plot is reminiscent of such other “single setting” films as The Shallows, 47 Meters Down and the Open Water franchise. The scenes depicting the sharks themselves range from pretty good to occasionally clunky (and I’m not sure who decided they should have the ability to roar).

But while none-too-original, Great White is certainly watchable. Viewers might even find considerable enjoyment in its utter predictability. Like comfort food or a Hallmark movie, there’s nothing special or surprising about it, but at least you know what you’re gonna get. Shark fans with similarly modest expectations shouldn’t be disappointed.