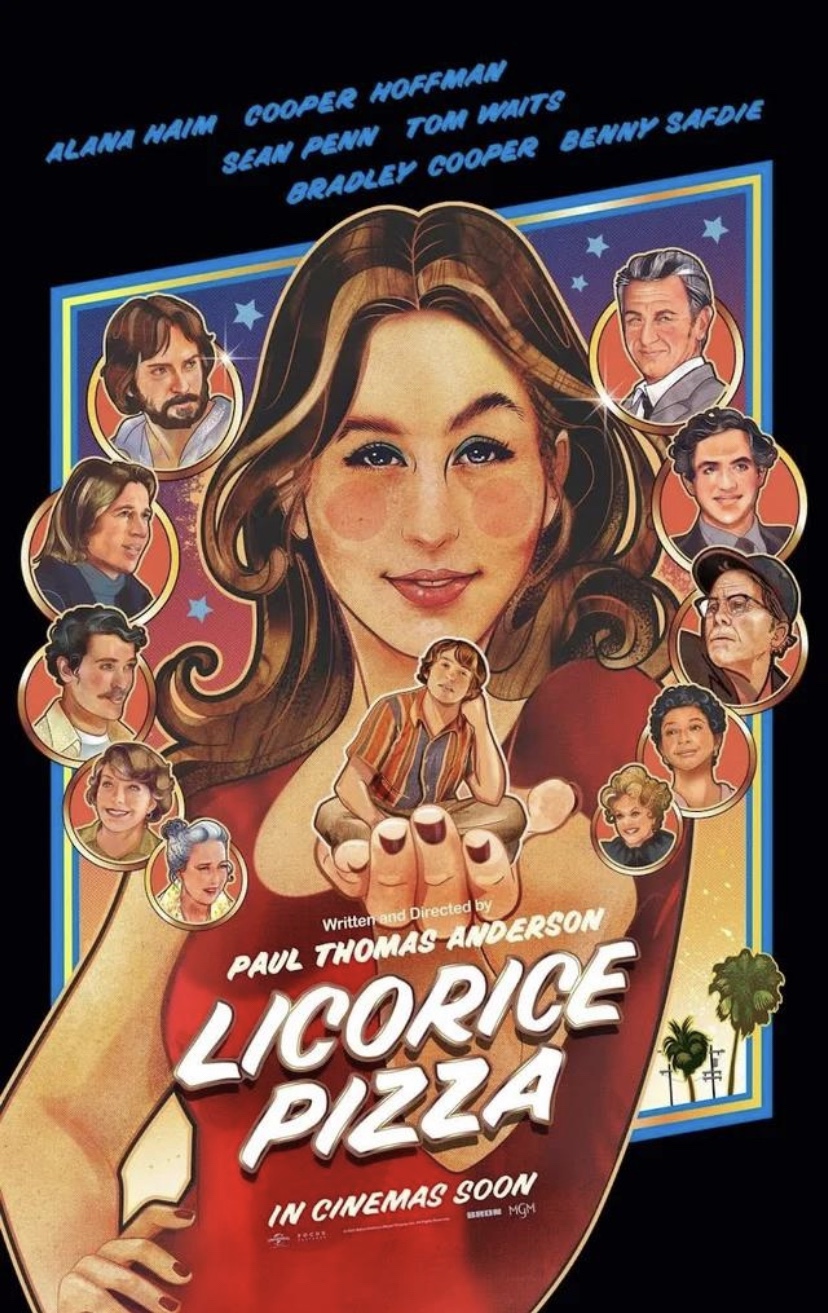 Call me crazy, and many are sure to do so, but I believe Licorice Pizza would have been better served by its original title: Soggy Bottom. As is dictated in the movie, ‘Soggy Bottom’ is something that simply elicits no sexual response, completely in conducive to sales.

It is two words that when put together cause a repulsive response—two things that simply should not work together: something that is soggy…on your bottom. Sure, you could say licorice and pizza don’t go together either, but it’s not quite as charming or sexually charged as ‘Soggy Bottom’. I only spend so much time on this vague and underreported detail because it is essentially my only gripe with a film that delighted me to such an endless extreme that I find myself smiling just simply reminiscing on its musing moments. In high school, I was given Days Are Gone—the Haim sister’s first album—and spent many nights driving and belting to ‘My Song 5’ (not exactly their best received work, but I simply adored it).

To discover upon the anticipated release of their second album that my favourite director of all time was working on their music videos was essentially a brain overload for this music loving film nerd. This is likely more information than is needed, but I feel it necessary to set the stage for just how nervous I was that the Haim sisters were not only featured in Licorice Pizza, but that Alana Haim was also its star! Would my love of Haim be perverted by film twitter ragging on another performance given misguidedly to a musician? Would my love of Paul Thomas Anderson be tainted by a plagued casting decision? Am I being overdramatic in these anxieties? No, no, and yes, as it turns out.

Licorice Pizza is not only a stellar redefining of the romantic comedy, but it’s also bolstered by—and even carried on the back of—Alana Haim, a performer with an almost envious quality to demonstrate a beautiful understanding of empathy, to allow her character (known to the audience as ‘Alana’, using her own namesake) to make chaotic decisions that are uniquely understandable. The angst and aimlessness of a twenty-something, the passion and fervent love for her friends, but with the steady undercurrent of questionable morality in the fear of one’s own maturity. The supporting cast surrounding Alana, and a steadily charismatic performance from Cooper Hoffman, all infuse the film with a variety of eccentricity. But this is a love story at its heart. Perhaps even frustratingly so. It may grate on the viewer the lack of characterisation for our male lead, Gary.

Indeed, Gary is a bit pluralistic. We’re meant to see him as no more than a kid, an idolised idea of how love will shape his life with no real understanding of the world, yet the plot hinges on Gary’s ability to beautifully understand the world around him and conquer it consistently and successfully as an aspiring entrepreneur. But when the story focuses on its main anchor, the brilliance of Alana Haim, it becomes a stunning take on the coming-of-age tale telling us that perhaps getting older is overrated in the end.

It’s a film that perfectly captures our strong pull to be taken seriously in tandem with our inability to take anything seriously in the world around us. It is a film that is passionately about love tied down by the frivolity and discomfort associated to sex. It’s a film that is unafraid to pull its characters frustratingly apart time and time again only to have them find their way back to each other. Because love is hard to come by. You may think it’s easy. But love is bitter like Liquorice. It’s filling like a pizza. It’s uncomfortable and messy just like a combination of the two. Okay, perhaps I do like the name after all. 9/10