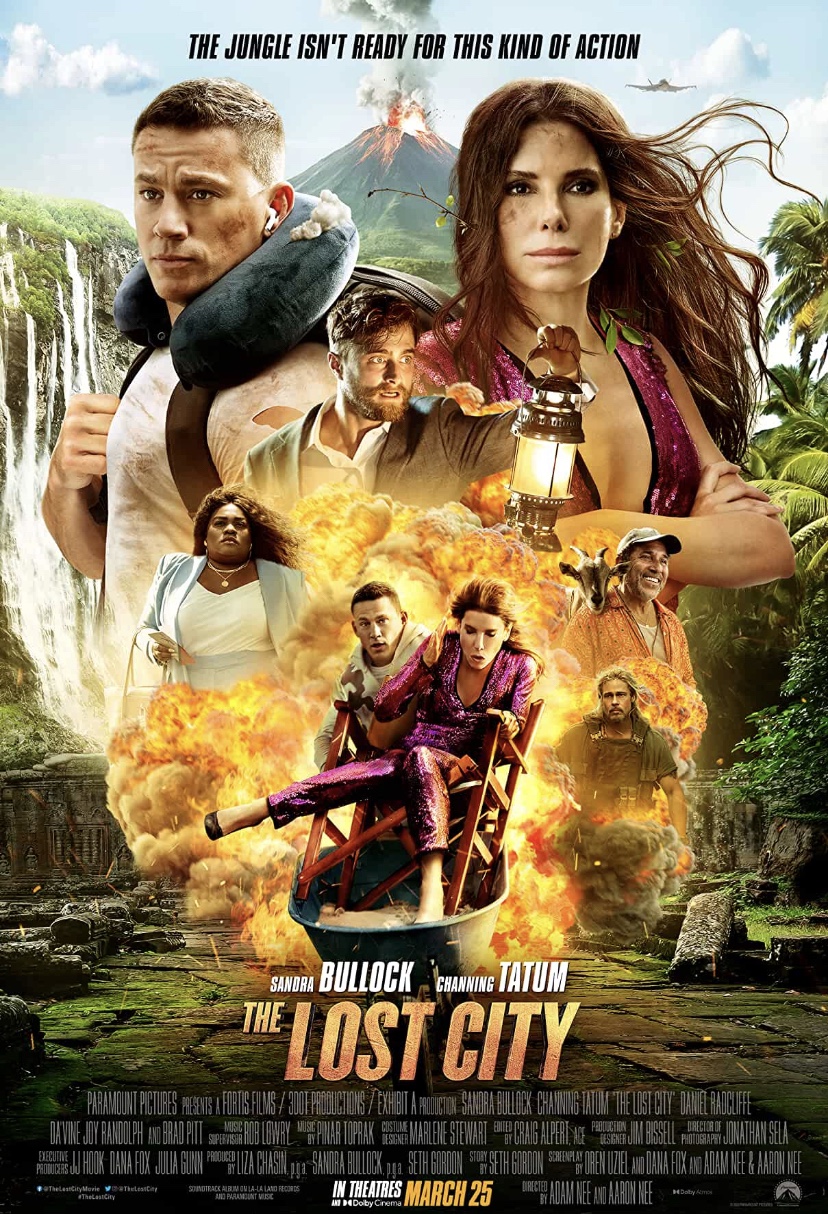 If you’ve ever listened to AC/DC, you know what to expect from every song: 1) A simple three-chord riff; 2) A catchy sing-along chorus; 3) A bitchin’ Angus Young guitar solo; 4) Repeat, repeat, repeat.

Probably not the most distinctive or challenging approach to music, but it has served AC/DC quite well for nearly 50 years. Not everything was great, but not much of it sucked, either. Listening to an AC/DC album is like ordering a Big Mac…no surprises, but at least you know what’s coming. Sometimes there’s comfort in familiarity.

If Raiders of the Lost Ark is Hollywood’s Back in Black (AC/DC’s best album) and Romancing the Stone is its Razor’s Edge (a worthy re-working of the same formula), then The Lost City can be considered its Stiff Upper Lip. There’s little about that last album that’s distinctive or memorable, but it’s certainly listenable. Similarly, The Lost City is essentially a 21st Century Romancing the Stone, which isn’t necessarily a bad thing if the right people are involved.

The three chords are, of course, the plot itself, which has romance novelist Loretta Sage (Sandra Bullock) being kidnapped by megalomaniacal billionaire Abigail Fairfax (Daniel Radcliffe), who’s convinced she can help him find the Crown of Fire, as depicted in her latest book. Alan Caparison (Channing Tatum) is a meat-headed model – gracing the covers of her books as the main character Dash McMahon – who takes it upon himself to rescue her with the help of professional tracker Jack Trainer, played by Brad Pitt. But be advised that Pitt’s role, while definitely a comic highlight, is a glorified cameo.

The bulk of the narrative focuses on Loretta & Alan fleeing through a jungle with Abigail’s thugs in pursuit. In this aspect, Bullock and Tatum are definitely the choruses, which is the most familiar part of any song. We’ve seen both actors in these roles before, so while neither is stretching themselves, it’s kind of fun to sing along with them because they deliver the chorus with conviction. Speaking of which, the screenplay and dialogue could be considered the bitchin’ guitar solo. In a break between verses and choruses, there’s some amusing banter, throwaway lines, and improvisation that adds some zing to the overall story.

Deja vu runs through nearly every aspect of The Lost City – even the title – but you could say that about any AC/DC song you’ve ever heard. Seldom laugh-out-loud hilarious and bereft of any narrative surprises, it’s nevertheless an agreeable spin on a tried-and-true formula, slickly assembled and performed by a band that knows the formula pretty well.