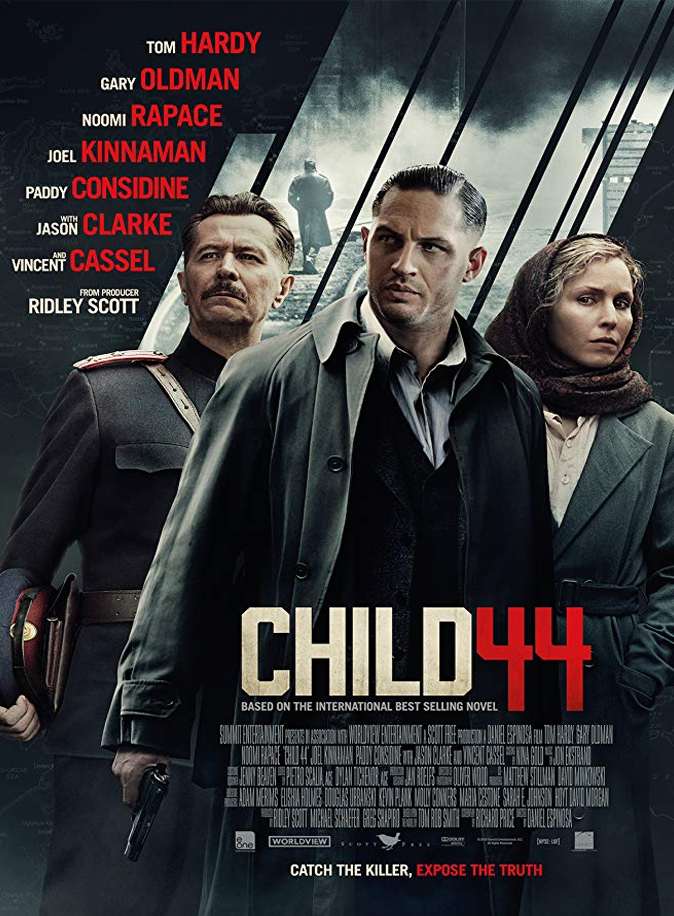 “There is no murder in paradise”

Tom Hardy and Gary Oldman reunite (The Dark Knight Rises (2012) in Child 44 and have them top bill a Russian serial killer movie.

Child 44 is not the movie it could have been. It has the story (based on the best-selling novel by Tom Rob Smith) It has the talent in Hardy, Oldman and Noomi Rapace (The Girl with the Dragon Tattoo and Prometheus) and even supporting actors Jason Clarke (Dawn of the Planet of the Apes (2014) and Paddy Considine (Dead Mans Shoes (2004), all the right ingredients are there for a great movie. Unfortunately the movie isn’t engaging enough and the subplot distracts the audience from the main plot about solving a serial killer case.

Leo Demidov (Hardy) an orphan is raised by a Russian family and is drafted into Army during World War II. A few years after the war, Leo who is now a captain and married to Raisa Demidov (Rapace). Along with his best friend Alexei Andreyev (Fares Fares) and the unpredictable and ambitious Vasili Nikitin played by Joel Kinnaman (Suicide Squad) join the MGB during the regime of Joseph Stalin.

Leo, Alexei and Vasili are looking for Anatoly Tarasovich Brodsky (Clarke) who is on the run from the MGB is tracked down after some intense interrogation scenes to a farm ran by a family with two young girls, who deny Brodsky is there or even know him. As Leo, eventually finds Brodsky making a run for it Leo catches up with him as they exchange blows.

Whilst in the midst of this Vasili has the family on their knees and shoots both the man and woman in the back of the head in front of their traumatised young daughters. Leo is too late to get back to stop Vasil’s actions and is furious with him. It’s in these scenes we get an idea of the kind of character Leo is. He was orphaned himself and from Hardy’s facial reactions you can see this still haunts Leo, regardless of his position with the MGB. The scenes also gives us indication the kind of job he has to do on a daily basis.

Tom Hardy is the star of the film through and through. It’s a story about his family life and professional life clashing over the case of Alexei’s child’s dead body. When his son is found murdered completely naked near the railway, the official explanation is that the boy was hit by a train since there is “no murder in paradise” since that is seen as a capitalist disease.

But Leo finds other similar cases and proceeds investigating, falling in disgrace with the Party. The officials want to pass it off as a train accident, but witnesses swear that it was murder. As more and more bodies start turning up and the hierarchy continue to look away, it’s up to Hardy to find the killer and bring him to justice.

The only issue with this movie is the way it’s presented. Part of the movie is focused on the serial killer storyline and the other half is about the Soviet Officials exiling his family and stripping him of power for his disobedience in his latest investigation. He has lost his rank and is transferred with Raisa to Volsk to work with General Mikhail Nesterov played by Gary Oldman.

When another boys body is found near the railway in the same conditions of Alexei’s son, Leo convinces Nesterov that there is a serial-killer on the loose and he agrees that Leo conducts a further investigation. It’s the way these two stories intertwine that is messy and in my opinion not executed that well.

Child 44 is a film with a promising storyline, great performances (although we see Russians talking to each other in English for some reason I can’t explain) but not engaging enough in my book. Which left me slightly disappointed and if it hadn’t been for Hardy’s solid performance I probably would have given up with this movie half way through.