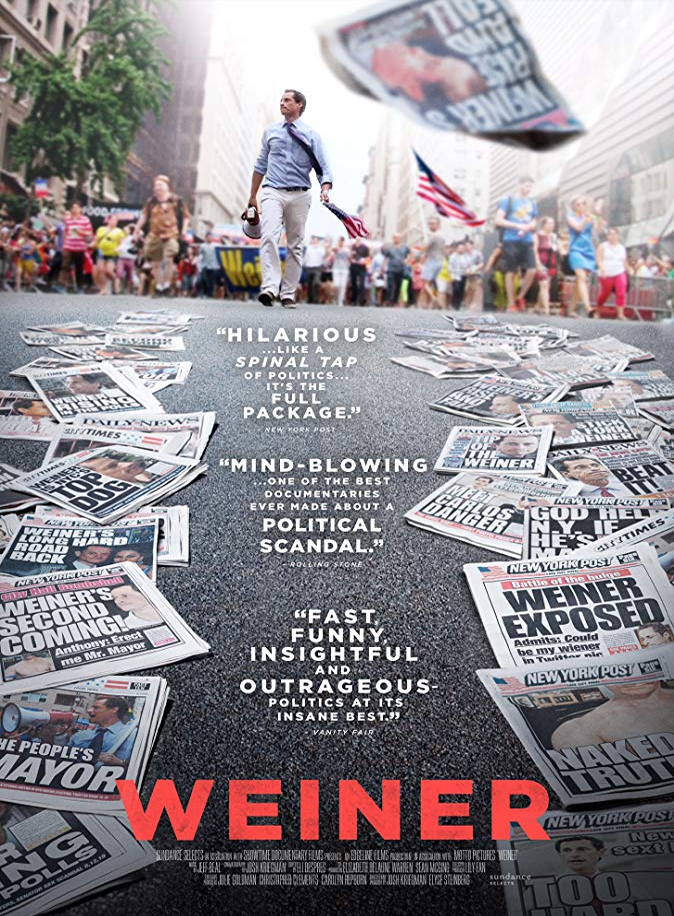 Weiner is a fly on the wall documentary, focusing on the unsuccessful, controversy hit, mayoral campaign of 2013 by Anthony Weiner. It follows the infamously eventful highlights of both his personal and professional life during this period, using a unique blend of behind the scenes and archival footage to create a strangely fascinating insight into the crazy world of politics.

The Marshall McLuhan quote “The name of a man is a numbing blow from which he never recovers” that opens the film pretty much perfectly sums up the context of this documentary in both a metaphorical and literal sense.

Making a fairly deliberate choice to show the positive traits of Mr. Weiner’s combative political style first. The film uses archival footage from his early career, prior to the major scandal which tarnished his reputation. Weiner at this point was still an exciting, young politician and congressman. It’s perhaps not surprising then that his popularity with the more disadvantaged and middle class vote was at one point significant; given his brash, somewhat vibrant debating style, not to mention his progressive driven policy, which helped him become a bit of a rising star within US politics. That is until word of his sexting misadventures hit in mid-2011. Beginning with a bizarre tweet sent from his Twitter account, appearing to show Weiner in his underpants and sporting a bulge, the entire sordid episode exploded on to various mainstream media platforms, ultimately ending with his resignation from Congress.

The documentary then begins in earnest with a talking head interview featuring Weiner as he discusses his story after the fact. “Shit. This is the worst. Doing a documentary on my scandal” we hear him say with unconvincing sincerity. It then focuses on the beginning of his second run at the New York mayorship, with Weiner proclaiming he’s a changed man, apparently showing penance for his sins and citing his wife, Huma Abedin’s, encouragement as the main reason for returning to the political landscape once more. That drive for redemption is perhaps understandable given that her name was equally sullied by husbands behaviour.

Weiner quickly gets his campaign up and running, recruiting back staff, lobbying for funding and renting office space from which to canvass from. We see him out and about talking with people on the streets, taking phone calls and heading up small rallies. Initially, both him and his team deftly deal with the media’s continual hounding about his past misdemeanours, which at that point, he seems to have genuinely put behind him. His confident persona and communication skills seem to have the public rooting for him again too, believing his mantra about being a changed man and even booing local rival candidates as they try use his scandal as leverage for their own campaigns. One Brooklyn woman shouts at surrounding reporters that she doesn’t care about his personal life.

It’s perhaps rather frustrating then that his seeming addiction to sexting rears it’s ugly head once again, as mid-way through his campaign, a 22 year old woman comes forward and exposes further lurid texts and photos the ex-congressman sent under the utterly ridiculous alias of ‘Carlos Danger’. This of course sends the media and news agencies into a complete frenzy and completely derails the campaign, which until that point had been moving along nicely. This leaves his devastated team with no option but to immediately go into damage control mode, with both Weiner and Abedin putting on a united front at a hastily arranged press conference. This particular part of the documentary is painfully awkward viewing. The long silences and palpable tension between pair resembling a real life Frank and Claire Underwood.

Huma, who previously worked for Hilary Clinton and was described as being like her second daughter, is the complete antithesis of her husband. Her consistently calm, professional and collected manner during the lows of the campaign act as a stark contrast to Weiner’s at times self-absorbed, aggressive, gaudiness. Yet despite all of the awkwardness and veiled anger at Weiner’s stupidity in embroiling her in yet another sordid scandal, she continues to stick by her husband, though lord knows why, and her experience in the field is perfectly exemplified in one scene in particular. During a staff meeting, where tensions are running a little high, we see Huma cooly tell a visibly upset communications director Barbara Morgan “You will look happy. This is for you, I’m just saying. Think of the optics”. This pointed reminder of keeping a united front being issued because of a loitering journalist downstairs. Again the clear connotations with the Underwoods in House of Cards is very hard to shake with the agenda of gaining power trumping personal grief.

Ultimately, and unsurprisingly, Weiner finished last in the mayorship contest, gaining less than 5% of the vote. And you know, despite all of his annoying traits and continual refusal to accept his role in the events, sure he admits his guilt but never truly accepts responsibility, I can’t help but find him slightly endearing. He’s almost Brent-esque in his delusion and he even has the Brent-esque cringe moments to boot. There’s something to be said though about his unwavering belief in progressive politics, in helping the disadvantaged in the community and his refusal to back down to his critics in the mainstream media. No more was this evident than when, sitting alone in an empty studio, Weiner is seen arguing with a MSNBC host, who asks him “what is wrong with you?”. The splicing of footage from the actual news show with the documentary was beautifully cut. More importantly though, it showed his faults; namely his cringeworthy lack of self-awareness, but also the personable side of his character too; namely his amusing brashness and obstinate attitude.

I think this excellent documentary does a really good job of emphasising the real problems with today’s society, media and news, and the seeming lust for crushing anyone in a position of celebrity or power. Weiner deserved to be criticised for his failings, but the media circus and egging on of the second women involved in his sexting scandal was equally despicable. The documentary also gives a really unique insight into the cut-throat world of politics and the sheer lengths politicians go to for a chance of success. It just shows that a fictional Frank Underwood type character might not be too far from the truth. Anthony Weiner story is a documentary makers dream and I thought both Kriegman and Steinberg did a wonderful job. Highly recommended viewing.