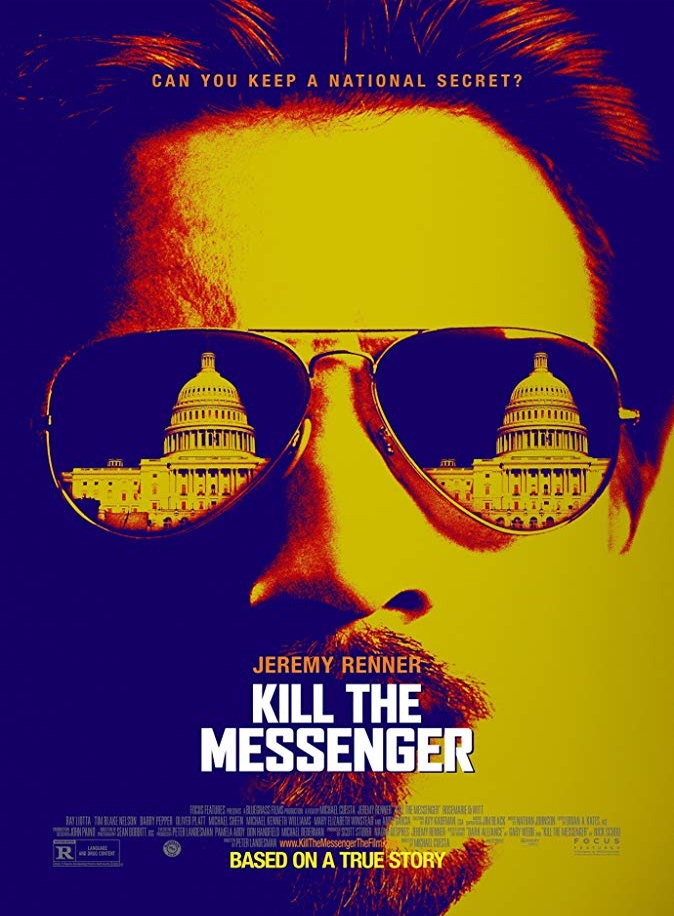 Jeremy Renner stars as Gary Webb who is a journalist at a small newspaper. When Gary receives a tip-off that a witness at trial of a drug dealer is a government informant, and is importing drugs into the U.S.

After investigating the information  he uncovers evidence that suggests that the CIA are allowing U.S.-backed rebels in Nicaragua to sell large quantities of narcotics in the U.S.  in exchange for weapons.

Swaying whether or not to publish the story (which he feels is the right thing to do), his life begins to change as paranoia and his faith in his colleagues starts to take effect.

Renner is basically running the show and the story in “Kill the Messenge” and manages to carry the film although he is supported by well know actors (Mary Elizabeth Winstead, Oliver Platt, Rosemarie DeWitt, Barry Pepper, Michael Kenneth Williams, Paz Vega, Robert Patrick and Ray Liotta) who really just make cameo appearances for the purpose of the story although I’m sure Director Michael Cuesta must have enjoyed dropping these stars in for the audience to gasp at.

Renner’s performance as Gary Webb is excellent and convincing by the actor who appears to be fully committed into becoming Webb (although if you google image the real Webb you will discover there isn’t much likeness between the actor and the real person, lets just say the movies “Webb” is more in line with the Hollywood look than real life).

The actor also manages to capture a wide range of emotions that the Webb would have encountered and had to experience and you can see the transformation by Renner from being a confident and sometimes cocky reporter to a struggling, tired and emotionally paranoid and scared husband and father.

The Writing in this movie is probably reliant on Gary Webb’s book Dark Alliance and although I haven’t read the book I’m sure this would have been a valuable source for Peter Landesman to work with.

Michael Cuesta’s directing is effective and appears to have collaborated intensely with Renner to capture the characteristics of Webb and allowing the audience to understand the position and stress Webb found himself in with the information that was brought to him.

Personally most of the movies I have saw Jeremy Renner in has been action movies, but here he really shows you his abilities as an acting heavy weight and thats without the ensemble of cameos dotted around the film. As an example the final scenes of the movie with Webb’s acceptance speech, and his ascending the escalator are so beautifully constructed and executed that “Kill the Messenger” is a must see movie.

The Cinematography and visuals fit the tone of the film very well. Stylised heavily with its grainy effects and the external footage it inter-slices throughout the film gives it an aged and exciting feel, similar to other movies from past decades. What ties it all together though is its clear focus.

Kill the Messenger turned out to be an unexpected great movie from my point of view as I was expecting it to be more in line with an action flick such as Enemy of the State, but had more of a “Snowden” feel to it with it’s heavy drama angle on the story. I highly recommend watching this movie from 2014.