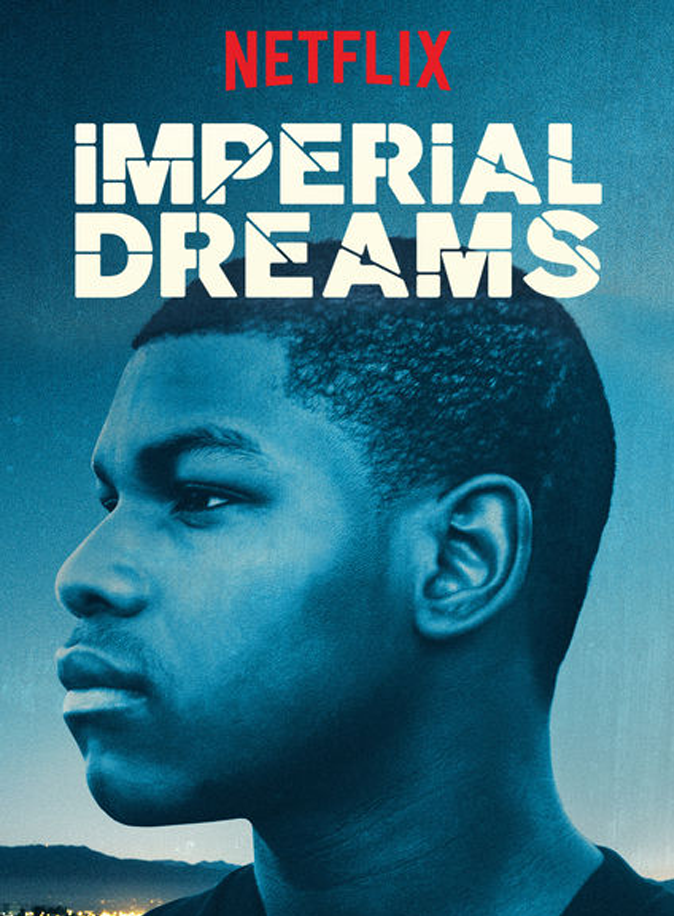 John Boyega is Bambi who is a reformed gangster’s devoted to his family and his future which is put to the test when he is released from prison and returns to his old stomping grounds in, Los Angeles.

Bambi tries to choose the honest way to an honest future, but all circumstances work against his intentions. Bambi’s Uncle Shrimp (Glenn Plummer) offers him jobs to get him back in the game and earn money. Trying to look after his son and living in his car, you would think Bambi would choose the easy way to survive but resists the temptation as best as he can.

Bambi’s dream of becoming a writer keeps the character grounded and offers hope to him when everything appears to be lost.

Imperial Dreams reminded me of a lower budget version of “The Pursuit of Happiness” and at the point of the movies release John Boyega had yet to become a household name in the form of Finn in Star Wars – Episode VII: The Force Awakens which came out one month after this movie.

John Boyega in Imperial Dreams carries the film as the story is told from his perspective throughout and all the scenes feature the actor. Boyega is convincing as a reformed convict trying to do what’s best for him and his family. You really feel his struggle and sense the temptation in the character to just give up the honest route with his uncle tempting him at every opportunity and Detective Hernandez (Maximiliano Hernández) on his case 24/7.

Glenn Plummer (The Day After Tomorrow) is the hard hitting Uncle Shrimp who lays down his law in his house and early on makes under no circumstance does anyone live under his roof without paying their way in the form of “Jobs that need done” Shrimp to me was a little inconsistent at times with his character. At one point he could be cold and in the very next scene offering to help Bambi with a few bucks to get a wash etc. Overall Plummer did a decent enough effort on the character and perhaps the writing let him down in parts.

Director Malik Vitthal’s low budget movie really isn’t all thrills and great action sequences. The movie is drama based and I felt most scenes he nailed in getting to the point. The movie had a gritty enough feels to it and all the landmarks in the film where either run down or depressing to look at which added to the story and hope.

Flying Lotus composes the music to Imperial Dreams and adds a very sombre mood to the movie. Previously worked on soundtracks for Grand Theft Auto V and TV Series Gossip Girl and True Blood I have to say the composition in the movie really works well in this movie and I have to say does a very good job for someone who has mostly composed for documentaries, Shorts and TV Series.

Overall Imperial Dreams is satisfying enough as long as you don’t expect some hollywood ending with Bambi becoming a sought after top writer and moves into a big mansion. The movie goes along at a relatively slow pace and really doesnt have a climatic scene. It is what it is, real life with hard knocks and I think if you haven’t seen Imperial Dreams I would give it a viewing.