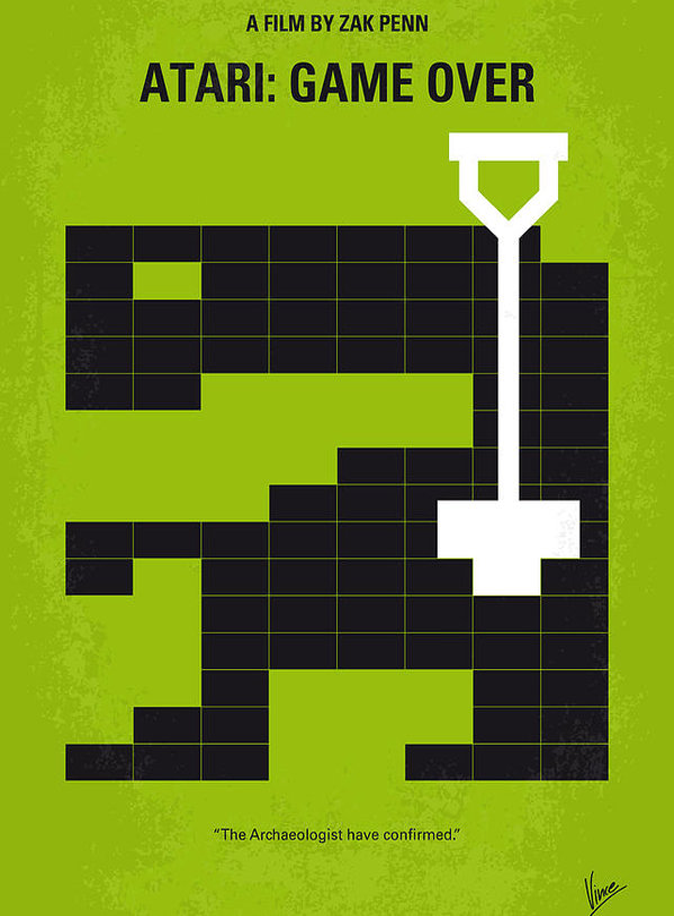 Having just reviewed “Silicon Cowboys” I felt I should revisit a film documentary from 2014 “Atari: Game Over” the film documents the rise and fall of the legendary video game makers and the myth that the video game adaptation of E.T. The Extra Terrestrial that was widely considered to be the worst video game ever made was responsible in the company’s downfall. The truth being that there was multiple reasons why Atari collapsed.

“Atari: Game Over” is an interesting documentary examining the rise and fall of one of the most famous computer companies, but there is also another story running parallel throughout the duration of the video game “E.T. The Extra Terrestrial” being buried deep in a landfill since September 1983. It is Zak Penn (Director) who covers the story of the cartridge burial in the Alamogordo landfill in New Mexico and hopefully discovering it’s resting place with the help of landfill’s employee Joe Lewandowski. Lewandowski is almost certain that beneath the surface of the waste land lies the cartridges so much so that he has created an intricate map that reveals the location of where they’d be.

The documentary also explains in great detail why and how the “E.T. The Extra Terrestrial” game was created and why it is regarded as one of the worst video games ever made. Howard Scott Warshaw, who was a video game programmer and creator for Atari during its heyday, created the console’s classic games like Yars Revenge and the video game adaptation of Raiders of the Lost Ark. According to the film, Warshaw was  tasked with creating “E.T. The Extra Terrestrial”, a task he was only given five weeks to complete because Atari wanted a release for the forthcoming Christmas period.

Howard Scott Warshaw is interviewed throughout this documentary and you really feel for the guy’s downfall in this situation. Warshaw is a very intelligent man who clearly enjoyed his time at Atari and enjoyed programming in general. When he explains the process and task at hand, you understand the pressure he had over him with creating an adaptation of a very successful movie and having the blessing of the movies Director Steven Spielberg who also tried and tested the game and approved its release.

“E.T. The Extra Terrestrial” video game had its flaws and lack of story behind it other than the story of the movie. Throughout the documentary we are shown interviews with all different people who worked in the video game industry explains the flaws in the game and also asking video game enthusiasts who portrayed the game as being to complex and difficult to understand.

To be fair to the filmmaker, we get to watch the excavation of the hunt for the video cartridges and discover whether or not the myths of the thousands of these games where in fact buried in a landfill and more specifically in this exact spot (Alamogordo)

I enjoyed the movie and although it may be misleading right up to its conclusion, you have to realise the number of other problems Atari was facing at the time. Enormous profit declines, due to the fact of the over saturation of the video gaming market but also Atari kept funding advertising money in their flagship console “the 2600”, in a time where it commanded the market share and the next generation consoles Nintendo and Sega were already on their way among the Commodore Amiga, ZX Spectrum and Amstrad CPC 464 all being released shortly after this time period. Warshaw, among over 7,000 other employees, were eventually let go in the mid-eighties, following continuously abysmal performances and small profits.

I enjoyed this era in video games and it’s development in entertainment. Watching Silicon Cowboys earlier spurred me on to watch this documentary again as it had the same feel to it and really involves all the main players in the storyline. If you haven’t watched “Atari: Game Over” yet I would highly recommend it if you want to reminisce over video games of yesteryear or if you are a current gamer wanting to discover the birth of video games then this is the film for you. Highly recommend.