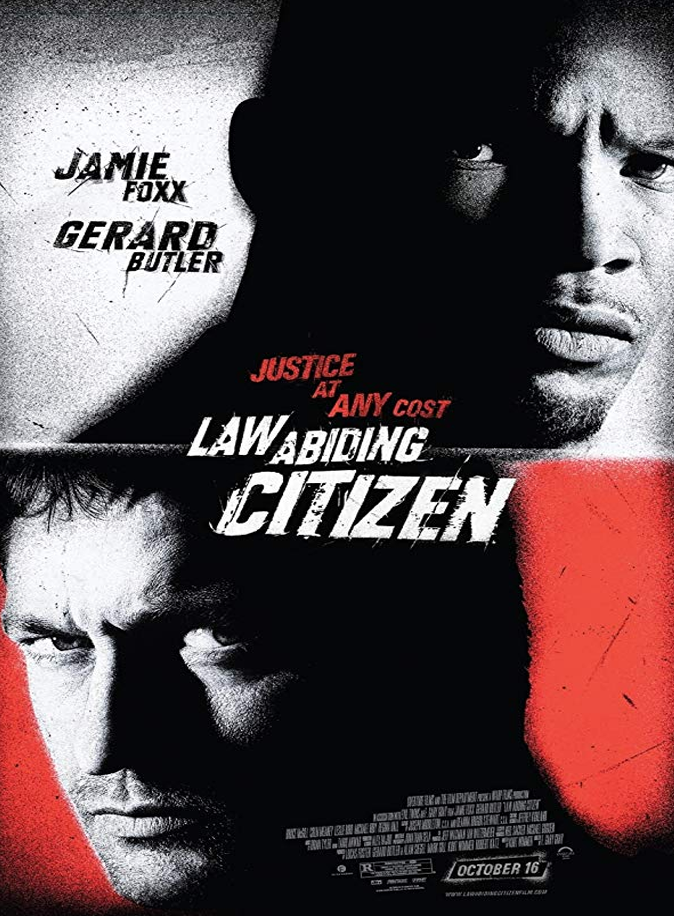 Our season of Retro Reviews continues with “Law Abiding Citizen) this movie was initially released in 2009 and at the time I remember enjoying it for what it was. A vengeance movie with a “The Justice System is Flawed” slant on it. Now don’t get me wrong, for anyone who has watched this movie will realise and also have had time to digest the plot holes and a lot of the storyline being a bit far fetched. But to be fair the film is to entertain and there is enough action to oversee a few of these flaws. It’s mainly focused on Clyde Shelton (Butler) who is an inventor who gets beaten and stabbed by a couple of intruders whilst restrained. Clyde witnesses the murder of his wife an although off screen we are later informed his daughter is also murdered in this attack. However the intruders where captured by the law and their case and their punishment was dulled down because of a deal made by the lawyers (Jamie Fox) which has enraged Clyde as he begins to plan his own method of justice 10 years later, not only taking on the intruders but also the justice system and the team of law experts who where involved in the deal.

Jamie Foxx stars as hotshot Assistant DA Nick Rice, who is proud of his extremely high conviction rate and it is here  we find out the reason for this is his deals he makes with the guilt as was the method in Shelton’s case. Basically charge them for less, but they still get charged anyway. That been said I was surprised he took this method with Shelton’s case as in my opinion looked like a very black and white crime and should have been an open and shut case to me but hey….i’m no lawyer. I do know right from wrong though and in the case of Clyde Shelton he is the audience at least up to this point. Shattered and Disillusioned by a flawed justice system you can feel his anger and bitterness towards Rice and his Law Team. Foxx does what Foxx does best, he oozes confidence and is a fast talker who portrays Rice as a man who although you can sense has a conscience always lets the law rule his heart and of course his ego. Jamie Foxx portrays the character who at first is very much in control of his life but as the story unfolds you can see the deterioration in the character as he begins to sense he is loosing control of the situation as Shelton’s plans begin to unfold. Fair play and credit to Foxx who convincing visibly portrays two characters of the same man throughout the duration of the movie and redeems his original qualities at the very end of the movie.

Gerard Butler portrays his character very well in the sense that he is the audience at the beginning. Butler’s facial expressions are of pain and disbelief at the verdict of a crime that looked like a case closed situation and the audience felt this too. What Butler does next with the character is extraordinary as he goes from calm and focused to a man on a mission to seek vengeance and justice on everyone who has wronged him. Gerard Butler isn’t my favourite actor by a long shot. I first saw him in a movie called ‘PS I Love You” where he portrayed an Irish Fella. Now coming from Scotland and in particular the same area as myself I found it hard to believe that a fellow Celt would struggle with a convincing Irish Accent. Unfortunately for Butler he came off as a “Too Be Sure Too Be Sure” Leprechaunic annoyance in this film and it was there I realised that accents aren’t his forte. It is no different here portraying an American. I know this is nitpicking but what is that he is doing with his mouth the whole time? It’s almost as if he has marbles in his mouth to disguise his Scottish Accent.

The rest of the Supporting Actors aren’t really called upon to do much more than “Support” which I was disappointed in when using actors like Bruce McGill who really is just there to advise and take Nick Rice under his wing as the DA and also Colm Meaney who plays Detective Dunnigan in what I think was a waste of time as I was expecting Meaney to play the kind of role he had and enjoyed in Con Air (1997) here is accompanies Rice and that’s about it. The Supporting cast really reminded me of the team who assisted John McClane in Die Hard with a Vengeance, just there stating the obvious and not doing much more. The focus is clearly on Shelton and Rice as they pit their minds against each other. Hell even those intruders who kicked the whole thing off are dealt with within the first 30 minutes of the movie to focus on the main two.

Without being overly critical of Director F. Gary Gray he does what he does best. A great action film and Law Abiding Citizen is no different. The story moves along at a ferocious pace and really only comes up for air when we cut to Rice’s family (Wife and Daughter) to keep things real. Pacing is one thing and in this day and age we all enjoy the straight to the point action but sometimes we require a little emotion in our story and if I had one major problem it was Clyde’s initial response and reaction to what happened to his family. I just felt a little time on this would have given the character a bit more sympathy with the audience but then again that would have been quickly dissolved with the brutal murder of Shelton’s cell mate with a bone from a steak. To this day I never understood why that scene was necessary other than to show us how far Shelton’s insanity had nosedived. Overall Gray does a fine job though and my issues are minor. The Soundtrack is pretty standard and wouldn’t look out of place in any action film or television series.

Overall “Law Abiding Citizen” is an enjoyable action film with a bit of physiological suspense. The storyline will keep you guessing who is next on his list to die and Clyde Shelton is a man on a mission. The script and delivery is fine and the actors do a good job. My mindset on this film 8 years on from when I first watched it hasn’t changed. I see a lot of “oh c’mon” moments in there from character plotholes and some of the scenes are a little far fetched but overall it was enjoyable and the ending although is a little predictable is the only way this movie could have ended. If you wish to see something that is highly suspenseful and will keep you on the edge of your seat, then Law Abiding Citizen will not disappoint.