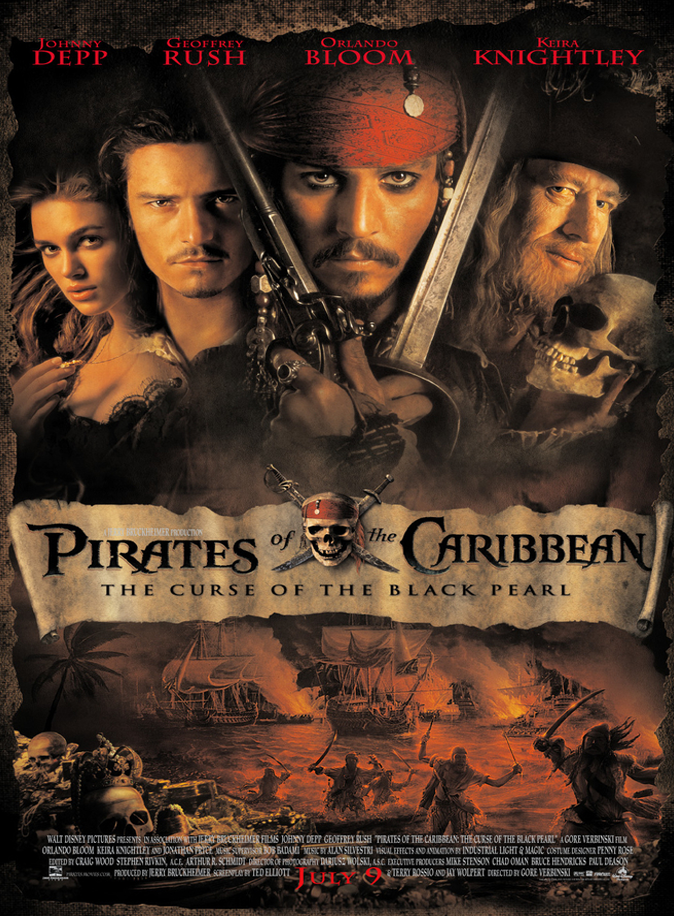 Don’t worry, you haven’t accidentally stumbled into a time machine and found yourself fourteen years in the past. This isn’t 2003, which by the way, wasn’t a bad year for film at all. No, I’m taking a reflective look back on the first Pirates of the Caribbean before watching Salazar’s Revenge. A franchise built on the unusual inspiration of a Disney theme park ride that is so etched into my mind that it’s literally the first thing that pops into it when I think about pirates (a pretty rare thing, admittedly, but still).

It would be fair to say the pirate genre (is that even a thing?) was dead in old Davy Jones’ locker (water). I honestly can’t think of many in my lifetime, within that niche genre prior to 2003, outwith the two kid friendly films, Muppet Treasure Island and Hook. Both of which I enjoyed tremendously as a child. It’s perhaps not surprising then that Curse of the Black Pearl was such a success when it released. It captured the imagination of audiences, young and old, whilst introducing the perfect blend of action, memorable characters, humour and an instantly recognisable theme. Essentially, it’s exactly what King Arthur, a film in a similar position this year, wishes it could be. Times where different back then though, we were yet to reach the current golden era of tv and films of that ilk where very much in fashion with the Lord of the Rings also doing its fantasy/action thing around the same time.

If you haven’t seen this film for some inexplicable reason then I’ll try to give a quick breakdown of the story just for you (I don’t know the meaning of quick breakdowns). Essentially, it’s an origin film, with a trio of protagonists led by; Captain Jack Sparrow (Johnny Depp), a roguish pirate with an insatiable lust for danger (and rum); William Turner (Orlando Bloom), a young man (and blacksmith) subconsciously attempting to escape his hidden pirating heritage; and last but certainly not least, Elizabeth Swann (Keira Knightley), a beautiful, young, upper class woman who’s thrust headlong into the adventure thanks to the cursed medallion/coin she took from a young Will’s neck years before. Verbinski really does excel at introducing the three and fleshing out each of their very individual personalities, giving them almost equal amounts of screen time in which to do so and you’re left in no doubt that they’ll be carrying the franchise going forward.

The film essentially centres around the Black Pearl, an infamous pirate ship of mythical status, that’s been missing for the better part of a decade. Captain Sparrow, marooned from said ship before its disappearance, is on a mission to find and reclaim it. Will and Elizabeth, seen meeting each other in the opening scene as mere kids are now older and inevitably the three come together in the most innocuous and random manner (some would say it’s fate), before being whisked off on a frantic, exhilarating nautical adventure across the Caribbean. Elizabeth kicks the film into action, accidentally calling the Pearl to her and the others location after the strange medallion she wears hits the water, immediately sending a shockwave like signal to its undead crew. This allows Verbinksi to introduce Captain Barbossa (Geoffrey Rush), the implied villain of the film, though in reality he’s far too likeable a character to ever be an effective villain, that role really falling to Jack Davenport (James Norrington).

The film actually tries to be quite multi-faceted for what should be a fairly whimsical, fantasy, action and it succeeds to a degree, I suppose. It attempts to add a touch of romance with the admittedly, fairly unconvincing love triangle between Elizabeth, Will and Jack (there was never any interest in the latter who has all the personality of a pear); comedy via the myriad of crazy situations Sparrow gets himself into; and obviously a fast paced, enjoyable story, which has few cool twists and lots of action. And the icing on the cake is the masterful CG and scenic backdrops that even to this day hold up remarkably well. Of course, it all ends with Barbossa seemingly dead after a climatic action sequence between Davenport’s men and the Pearls undead crew, and all our new heroes surviving to fight another day (for some another four films worth). It’s a Disney film and the first of a franchise, so you can’t be too harsh on the happy ever after finish.

I have to say that despite the story being enjoyable and the visuals being on point, it’s ultimately the perfectly casted roles that make the film in the end. Johnny Depp, whatever you may think of him as an actor (I’m not a massive fan and think he’s slightly overrated), is tailor made for the role of Jack Sparrow and has made it iconic in the prevailing years. Does he overact a little? It’s Johnny Depp, I mean come on, of course he does. One thing is for sure though, it’s still the best damn Keith Richards impression I’ve ever seen. Orlando is already in full shake off the Legolas typecast mode by this point (a futile task) and does a fine job as Will. Keira Knightly is fantastic as Elizabeth in what was to be her breakthrough role (forget that bloody Beckham film). But by far my two favourites in this are Mackenzie Crook and Lee Arinberg as the hapless duo. They provided the most laughs besides Depp and both were a real bright spot in the film throughout.

I hadn’t watched this in a good few years and it was nice to go back and give it another viewing from a fresh perspective. The franchise has definitely suffered from viewer fatigue in the later instalments, but this still holds a dear place in my heart for that immediately recognisable theme alone. I’m not even going to recommend this because I fail to believe that there’s a person above sixteen out there who hasn’t watched it already and if there is then seriously, what’s wrong with you?