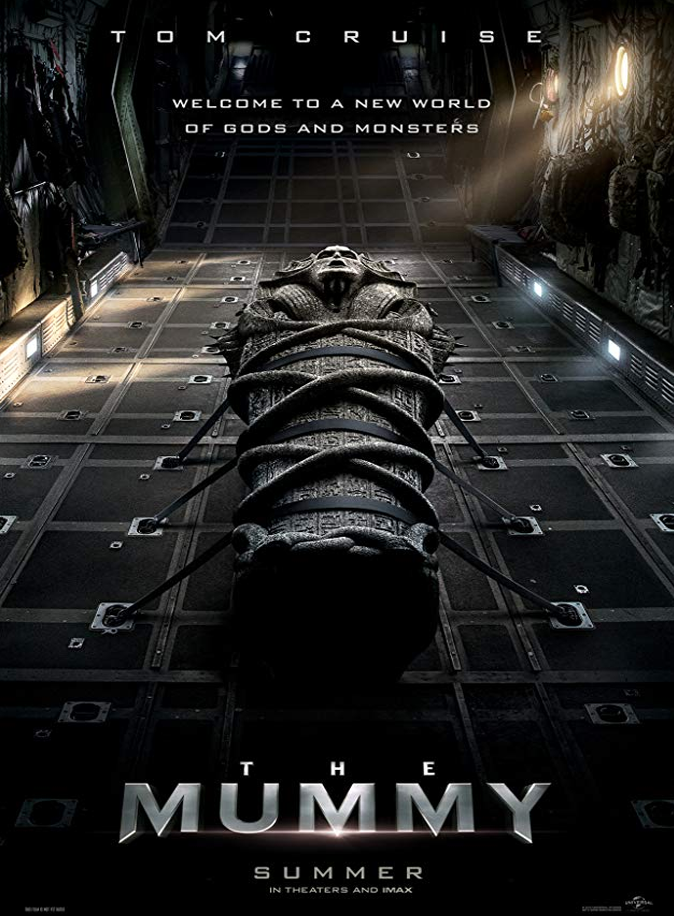 When Universal released the critically derided Dracula Untold in 2014 it postponed its planned reboot of the ‘Dark Universe’. A world full to the brim with weird, wondrous and classic characters such as Frankenstein, his monster, the aforementioned Dracula, the Hunchback of Notre Dame and the Invisible Man. Choosing to ignore some of those interesting possibilities, perhaps keeping them for future iterations, they decided to plump for the Tom Cruise anchored film ‘The Mummy’ despite the fairly recent versions of the late nineties and early naughties.

I’ll start by saying that the 1999 Mummy starring Brendan Fraser with Imhotep tearing it up is still my favourite and I can only hope that things get dramatically better in future instalments of this newly constructed cinematic world or it might be dead before it even properly begins. It’s their second attempt at a reboot of the universe in three years and this release isn’t much better. It’s almost as if leading man Mr. Cruise had too much of an influence on the script and somehow managed to convince Kurtzman into doing a horror themed Mission Impossible film starring a neurotic, undead, Egyptian mummy because that’s exactly what this film is at heart.

Main man, Nick Morton (Tom Cruise); a US military officer and his friend/partner Sergeant Chris Vail (Jake Johnson); accidentally unearth an Egyptian tomb after ordering an air strike during a chaotic firefight. It has the usual cheesy “I’m still alive” patter before the building their on collapses and the two men fall right onto the edge of the massive sinkhole come crater housing the tomb. Shortly afterwards, Jennifer Halsey (Annabelle Wallis); a feisty archaeologist that just so happened to have a fling with Nick a few days earlier, arrives on the scene to lend her talents and investigate further. Of course they stumble across the sarcophagus and remove it from the tomb despite every living thing fleeing upon its discovery.

Nick is essentially cursed from this moment onwards and the trios luck goes from bad to worse when Vail turns into a telepathic plaything for the Mummy (still in the sarcophagus) onboard a military plane and decides to stab his superior Colonel Greenway (Courtney B. Vance). Of course, as you’d expect, this doesn’t end well for Vail with his supposed best friend, Nick, shooting and killing him without much hesitation. Though, if I’m being honest, he definitely got the easy way out when you see what happens next. What comes next is the plane crash everybody seen in the trailer. I.e. Probably the best part of the film and it’s only about three minutes long. Ok, I’m maybe being too harsh there because if this film does anything well then it’s most definitely the action sequences, of which there’s a fair few.

It’s visually impressive and the action as you’d expect in a Tom Cruise led film is more than decent, but the plot is just boring, predictable and well… not very good. The  Mummy incidentally, who’s turns out to be a female for a change (sarcasm warning) is Princess Ahmanet (Sofia Boutella); a particularly evil young lady, who murdered her father and his entire family in a ritual to resurrect Set (an Egyptian god of disorder and violence). Boutella does a decent enough job, managing to look quite intimidating and putting in a more than decent performance. Despite this, she is let down by a terribly written part. Women leads have been pretty empowered in recent blockbusters, but not so much here. Yes, she’s an undead, supernatural monster that often rag dolls people around for fun, but sadly, she spends most of the film acting like a needy, jilted, ex and obsessively stalking Nick.

Which, of course, being the character played by Tom Cruise means she’s pretty much screwed come the end. It’s not all plain sailing for Nick though. He does goes through hell at times; from suffering a betrayal of sorts at the hands of Jennifer, outed as an employee of Prodigium (a monster-hunting organisation headed by Dr. Jekyll himself), having to fight the latter as the sinister, transformed Mr. Hyde, continually having to scrap with Ahmanet’s ghoulish underlings (including one particularly toe curling moment underwater and finally being faced with a sacrificial moment of complete unselfishness to save Jennifer (she’s now back on his side and he’s in love with her again). Incidentally, the best moment out of all those is the scuffle between Nick and Hyde. I quite liked the cockney alter ego Russell Crowe transformed into during that scene and he shows perhaps most promise for future films in this universe.

By the way, just for the record, I’m not slagging off Tom Cruise here, even if it does seem to be coming across like that. He’s by no means a negative for this film and actually does put in a fairly decent performance. I just feel like he never seems to pick any roles even remotely deemed edgy or risky. The character of Nick Morton is well within his comfort zone again and given his tendency for playing hero type characters that survive everything, I never at any stage felt like Nick was ever in danger. He survived a damn plane crash without a scratch, bruise or even a broken bone. I mean, even for a supposedly cursed man that’s just insanely unrealistic. The choice his character makes at the end hints that he’ll be back again and it’ll certainly be interesting to see what route they take with him.

Ultimately though, this film can’t be described as anything other than a complete and utter disappointment. Sure, it’s all right for a two hour piece of action escapism but surely if you’re hoping to set-up a hugely successful, multi-film universe, the likes of what Marvel have accomplished, then it has to provide so much more than that? The brutal truth is that it doesn’t and I honestly would struggle to recommend going to watch this in the cinema. Behind the flashy visuals, the gleaming smile of Cruise and perfectly choreographed action is a hollow experience that must be improved upon in future instalments.