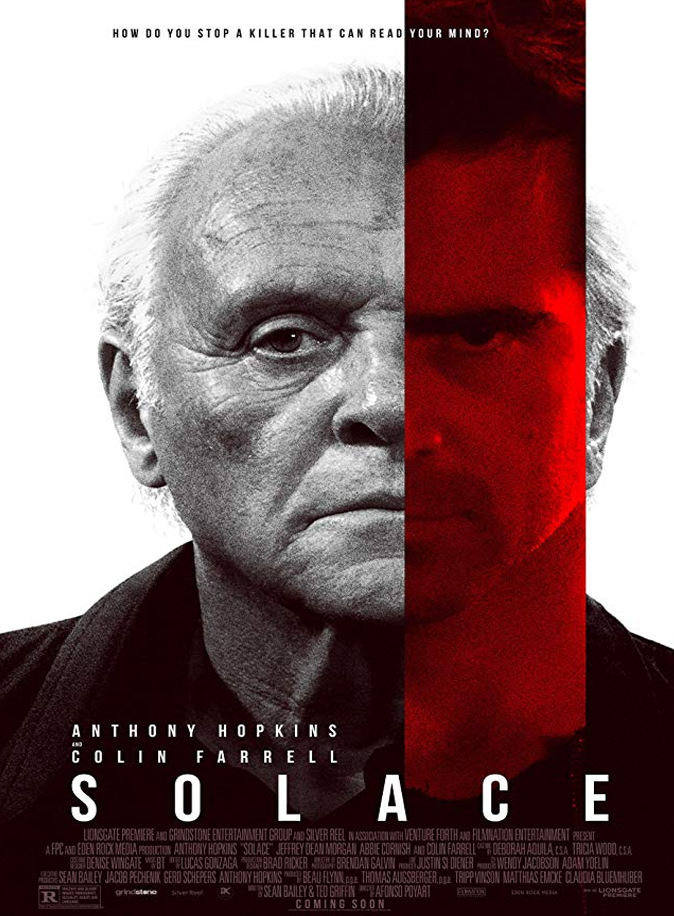 Plot: A psychic works with the FBI in order to hunt down a serial killer.
Running time: 1 hour 41 minutes
IMDB Score: 6.4

Why I watched it: Sounded like a good serial killer movie plus a very good cast.

Random thoughts: I had seen the trailer and at first this looked like it was going to be a throwback movie, remember when there were tons of serial killer movies out there and I thought this might be a fun B-Movie with A-Actors.  The other thing about this film with that cast I’m shocked this didn’t get a bigger release.

What I liked: First off I was wrong about tone, this isn’t a slick thriller this is a more grounded drama, sure the plot is about a psychic helping track down a serial killer but it’s not pulpy at all.  Now one thing to get out of the way, it’s brought up in the trailer and this might be a spoiler but the selling point of this film is that the killer is a psychic as well.  One thing I want to praise is that they don’t screw around with Hopkins character being a psychic, there’s no scene where they’re told they can’t go to him for help cause there’s no such thing as psychics, it’s a fact he is what he is and they move forward.

The film reminded me of the Dead Zone TV show they way they dealt with “the gift” of being psychic. The acting as you might suspect is very good here, Hopkins is very good, sad older, Jeffrey Dean Morgan is such an underrated actor, I have no idea why he’s not a star, sure he’s known but the guy just has such an easy charm about him, so charismatic.    He’s good here even though he’s stuck in the Cop role.  Abbie Cornish is playing against type but she’s also playing the one stock role, very under written.

Now let me warn you Colin Farrell is not in it that much, he’s got a key role and he has a couple of good scenes with Hopkins but as far as screen time goes you’ll be disappointed if you’re a fan of his.  Now this film is very tricky cause you think going in that this film is about tracking a serial killer using the gimmick of both the hunter and the hunted being psychic as it’s hook, and it is and isn’t.

The film has bigger fish to fry here and it turns out to also be a very heavy drama with a big social question it wants to pose.  Now I won’t spoil it but it could be a deal breaker for some viewers.  I will say this without spoilers it does ask the question of what it must be like to be a psychic to know things, to have that weight, to touch someone and know.  This is a film that asks some tough questions and it answers some and some they kind of leave open.  It’s a much smarter and deeper film than I thought it was going to be.

What I didn’t like:  Again no spoilers, so let me tap dance, I think the movie hit the tone they wanted but I don’t think this plays like a thriller, now if I order a pizza I don’t want it to taste like a hamburger, I want a pizza even though I like hamburgers, I was in the mood for a pizza.  With Solace I watched it late on Friday night, just wanted to relax and enjoy a popcorn movie, it’s not that type of film, and I agree not the movie’s fault but I do think the film gets hurt by trying to at least be like a thriller cause the first half is them tracking down this killer and it seems like a Manhunter type film, but it gets deep and some twists happen, major twists.

So I was kind of switch my expectations on the fly.  Now I’ve watched a zillion films and I can adapt I just wonder if this was the right direction to go in, it did kind of left me coldish at times.  The film also feels like a lot got cut, Marley Shelton plays Jeffrey Dean Morgan’s wife, and he has a son and it feels like they should have had a bigger part that in fact Morgan at one point had a bigger part.

Also Hopkins at one point describes Abbie Cornish’s character(she’s Morgan’s partner) as Morgan’s girlfriend, now Hopkins character is very straight forward about his ability and doesn’t joke around he’s sometimes can use it as a weapon to keep people off guard so it made me think they’re might have been some sub-plots cut.

The film does feel rushed at times and at times the film seems to be fighting itself, what it is and what it wants to be.

Final thoughts: This is a hard film to judge, I liked the acting and I was digging the serial killer plot and truth be told I liked the film for the most part but it’s one of those I liked it…but, after I watched it I wasn’t sure what I thought, did I like it?

Not sure I kind of respect the fact that they tried to make it deeper and about something human and not just a slick soulless Hollywood thriller but I’m not sure it was successful enough for my liking.