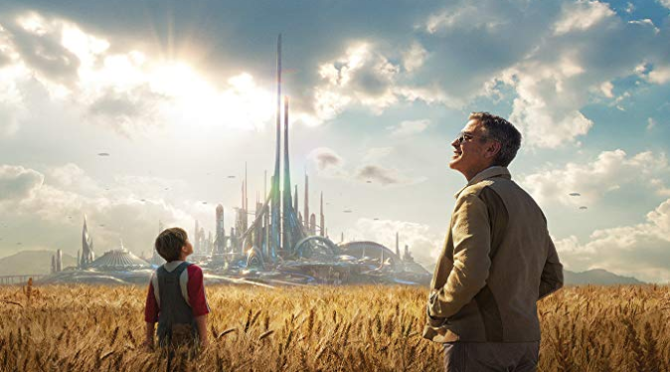 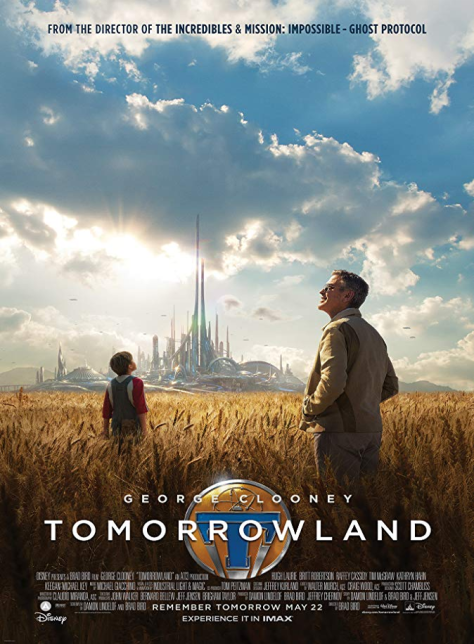 Tomorrowland is the movie Director Brad Bird opted to make instead of Star Wars: Episode VII – The Force Awakens. I remember at the time thinking “You’re a Star Wars fan but you decided not to accept Lucasfilm and Kathleen Kennedy’s offer of directing the next chapter in the Star Wars Saga…..are you mad?”

Having watched Tomorrowland I can now appreciated Bird’s decision and understand as a fan of the Star Wars Saga he wanted to enjoy the next episode as a fan and also now viewed Tomorrowland and it’s concept I fully understand why a guy like Brad Bird was more inclined to be attracted to this movie.

Having something in common and a shared destiny, Casey Newton (Robertson) bursting with scientific curiosity and a ton of questions and a former inventor and boy-genius Frank Walker (Clooney) embark on a mission to unearth the secrets of a place somewhere in time and space that exists in their collective memory.

I have to admit that I had to watch this twice before deciding to review this movie as although the storyline isn’t at all complex, there is a lot happening in this plot. The opening sequence to this movie finds young Frank (Robinson) in the early 1960’s attending a science fair in which he had brought along his latest invention, a jet pack that he wishes to be accepted in by the fair via a man named “Nix” played by Hugh Lawrie. At first, I believed the young girl “Athena” (Raffey Cassidy) with Nix was actually his daughter but there is a reveal  later on in the movie in regards to their relationship that I don’t want to spoil for anyone who hasn’t watched the movie yet.

After his invention is rejected he is encouraged by Athena to follow him with Nix’s party into a secret part of the fair Frank discovers a portal to another world and time that will change his life forever. At this point I am trying my best not to uncover too much of the plot but I think it’s fair to say that this other place is ahead of it’s time and more advanced than Earth in the 1960’s.

One thing I have always enjoyed is the futuristic theme that is ironically set in the past. To give you an idea of this, if you have ever played the game “Fallout” on any home console you will get what I mean. Even those World Fair scenes in Captain American: The First Avenger or going further back with another Joe Johnston project “The Rocketeer” I have always found it fascinating on how the past has tried to project an idea that is “futuristic” Well that is the theme and tone to a lot of this movie. I hope i’m making some kinda sense?

Present day America and it is young Casey Newton who discovers being in contact with a pin transports her to a glimpse of this world that a young Frank discovered all those years ago. She must now seek out the older Frank to discover the secret behind this strange land and why he was banished from it forever and also uncover a secret that only Frank knows about the fate of earth.

Tomorrowland as previously mentioned is a straightforward storyline but a lot happens in this movie at an alarming rate that you will miss things on a first time viewing. Visually this movie is a masterpiece and top marks to the visual effects guys who pulled off the almost impossible task of making the audience believe in this world. The action is just as important and the visuals help these sequences become believable and will keep you engrossed for the duration of the film. This is why I now understand the creative freedom Brad Bird would have had on this project as opposed to the Star Wars brand.

The cast are phenomenal in every aspect and have great chemistry between them in particular Clooney as old Frank with the brilliant Britt Robertson and equally brilliant are Thomas Robinson as young Frank and Raffey Cassidy as Athena. The humour in this movie reminded me of the chemistry we saw with Mark Hamill, Carrie Fisher and Harrison Ford in the original Star Wars movie that combined great action and danger with the right amount of humour to keep it light. Having said that, this film does have some darker tones for a Disney movie and some of the fighting sequences are quite graphic (Robertson with a Baseball Bat anyone?)

Tomorrowland is a highly recommendable movie that all the family can enjoy from start to finish. Going into this movie I did expect it to be more for kids and it is to an extent but all age groups will enjoy this movie and my only regret is not seeing this in the cinema on it’s release. If you have already watched Tomorrowland then I’m sure you will appreciate it for what it is and it definitely is a movie you can revisit. For anyone who hasn’t watched it yet, I can’t recommend this enough.