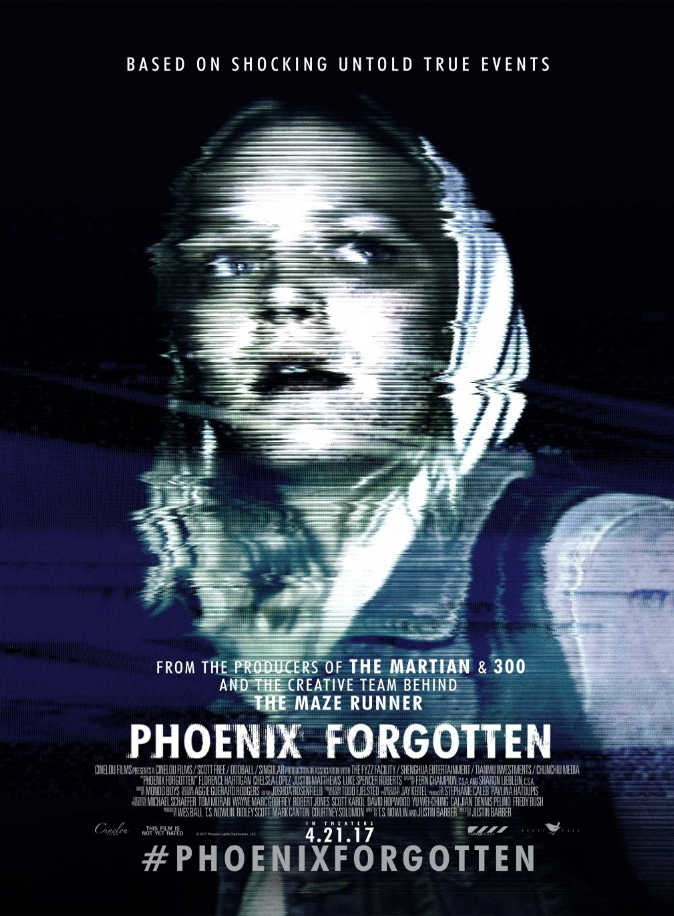 I made a really stupid decision this week and decided to watch a film by the name of Phoenix Forgotten. I’m not quite sure at what point I decided watching a 2017 reboot of the Blair Witch Project was a good idea. I tried my best to purge all the inane knowledge of this turds existence from my mind, like the brain of a tinfoil hat wearing, serial alien abductee. Sadly though, I failed on that front. It’s still fresh as a daisy and they say you should strike whilst the irons hot, so I’m going to be as blunt and honest as I can be here.

You may think I’m jesting when I mention Blair Witch reboots, but sadly I’m not. Why would anyone want to repeat the mistakes of a terrible, overrated, pile of crap from 1999, I hear you ask? Lord knows is my reply. Perhaps Justin Barber, the rookie director who helmed this will have the answer to that burning question? It’s a found footage film (I strongly dislike these as a rule) about three teenagers who disappear following an investigation into strange, mysterious lights that appeared over Phoenix. Chief of these is Josh Bishop (Luke Spencer Roberts), something of a wannabe, uglier, reckless Fox Mulder. Then there’s Ashley Foster (Chelsea Lopez) and Mark Abrams (Justin Matthews) rounding out the trio. Fittingly, having mentioned the clear inspiration behind this, the overwhelming majority of the film takes place via jerky camera vlogging set in, you guessed it… 1999. What a coincidence.

There’s a much tooing and throwing between the current day events and the past filmed via Josh’s youthfully excitable narration. In the present day, there’s Sophie (Florence Hartigan), younger sister (now older of course) of Josh who’s clearly never gotten over her brothers disappearance and has arranged for a documentary to be made on the story. The film begins with a birthday party that’s rudely interrupted by the arrival of what looks like other worldly visitors in the night sky, this sparks of a passion inside Josh who dives in headlong. He meets the bubbly, extroverted Ashley and off they go investigating the X-files style phenomenon. They’re joined later on by Mark and his trusty Cherokee jeep once they come to the conclusion that the desert is the place to be with only a couple of cans of beer to sustain them. The entire story arc involving the whole Sophie investigation/documentary thing felt like a forced, almost rushed addition to me, never really gripped me at any point or added anything to the story and ultimately ended in a disappointingly unresolved manner.

I usually try my best to list and/or outline some positives I’ve taken from a movie, but in this instance I would really be scraping the bottom of the barrel to find some. The beginning, when Sophie discusses the mysterious disappearance of the three teenagers, perhaps held my intrigue for all of ten minutes, but I’m being deadly serious here when I say that I was almost nodding off three quarters of the way in. The overwhelming majority of the film is viewed from the perspective of Josh as he and the others document their findings, playfully joke around with each other, interview people from the tinfoil hat brigade and finally talk with a Native American who regales them of his experience upon seeing the same strange lights when he was younger. All of this coming via an amateur ‘camcorder’ form. This final interview leads Josh into having his eureka moment and mapping out the course this potential alien ship is heading, and sending the trio on their final trek deep into isolated, apache country for a date with destiny. I’m not even going to hold back on spoiling that particular reveal because frankly you shouldn’t watch this pile of crap anyway.

The ending is so painfully predictable that I’m sure you’ve already worked it out. The decision though to have the three be taken away sequentially was bizarre and made no sense from a plot standpoint. Why would advanced alien species, capable of travelling the mind boggling distance from their home world to earth, defying the laws of physics in the process, not just swoop them up in one go and be done with it? The answer is simple. Because that would be deemed boring, it would lack suspense, so they take Mark first then Ashley and finally Josh. The ship incidentally, which we briefly see in a blink of the eye towards the end, strangely resembles the one which Jodie Foster used to do her wormhole thing in Contact. Robert Zemeckis would have a strong case for plagiarism there. One final point which left me scratching my head with confusion was the discovery of the lost camcorder and tape within. The film clearly goes out its way to try and explain its earlier discovery in a school storage unit in the final shot, but fails badly. The police tasked with organising the manhunt clearly felt there was no reason to follow their only lead and watch the footage captured in a camera left in the middle of nowhere. Yeah, that just about sums up the complete lack of logic in this film.

In conclusion, if you’re even remotely of a similar mindset to me when it comes to the found footage genre (why did I watch this?) then don’t watch this film. It will only disappoint(disgust) you. If you like a film with an engaging, logical story or even one that doesn’t leave you nodding off, this is only 87 minutes long too, so that’s quite something, then don’t watch this film. There’s literally nothing left for me to say about this monumental waste of time other than to rate the abomination.