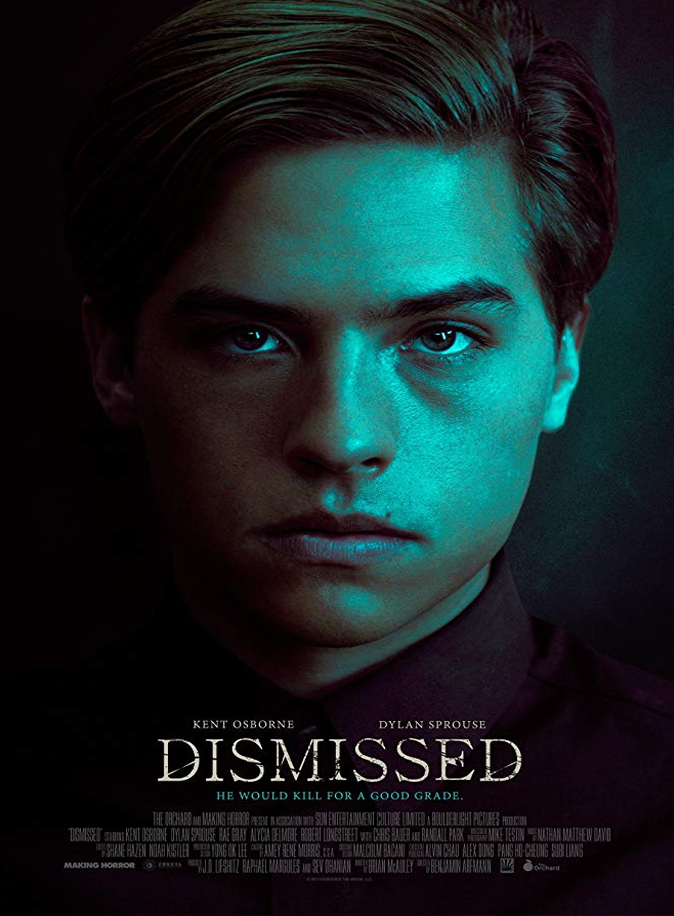 Well I watched Dismissed, the Benjamin Arfmann horror, over the Christmas weekend. This was probably more out of mild curiosity and a desire to pull my eyes away from the cheese board than out of any great expectation of seeing a decent film. It’s billed as a thriller too but frankly lacks badly in that department and it’s often a fairly predictable outing that has you rolling your eyes more often than covering them with shock or fear.

Dismissed centres primarily around the antagonist Lucas Warren. He’s a new arrival at school that initially appears to be the perfect student. An intelligent, A-grader, who is something of a master at chess isn’t the first person that springs to mind when you think of a manipulative killer. But as Arfmann begins to skim below the psychological surface of the honours student early on however, it soon becomes apparent that he’s more than a little unhinged. The first sign of this nasty, dangerous streak, manifests itself when he intentionally injures a fellow member of his chess club during their chemistry class. Why? Well, because he’s the number one seed and Lucas is dealt the ignominy of being merely number two even after defeating said other kid. Our antagonist doesn’t take criticism or anything resembling a slight on his abilities at all well.

Which is why Dismissed is totally predictable. Warren’s motives, his decisions and the plot after this become transparent. And it’s why it’s not surprising that he then moves onto targeting his idealistic English teacher Mr. Butler next. Why? Because he gave him a B+ instead of A grade. This is an appalling affront to Lucas’ intellectual brilliance, being 0.7 points below an A is not even close in his mind to acceptable. He decides to absolutely destroy Mr. Butlers life after failing to heatedly persuade him into increasing the mark. He begins by trying to blackmail him at first and then moves onto manipulating a fellow classmate into trying to initiate an affair. When this goes pear shaped, he offs her with little care and tries one last time to frame Butler for the murder.

In terms of performances in this one. It’s really a one man show for me. Dylan Sprouse is absolutely fantastic as Lucas Warren. He’s genuinely terrifying at times and looks every bit the psychotic, emotionless killer. His eerie facial expressions and quick bursts of rage followed by the picture of calmness, sometimes in the same scene were impressive. I can’t believe he’s the little boy from Big Daddy. The only other person worth mentioning really was Kent Osborne as Mr. Butler. He was merely OK. Some of his lines were a little bit woodenly delivered for me but I suppose he did play off Warren nicely enough.

We’re then given an ever closer look into the mind of this young man via his father. Who incidentally, is well aware of the predatory darkness that lurks within his son and looks very much like a man close to the brink. Lucas is clearly a psychopath with a severe personality disorder. A fact that is illustrated with both the fathers comments, this particular quote was a good example, “Since he was a kid, he used to film himself trying on different emotions. Like he was practising to be a human” and with the shots of him trying to convey said emotions into a mirror as a young child. This moment proves to be pivotal for Mr. Butler, gives him the opportunity to clear his name, and admittedly, the mirror scene was rather unnerving to see.

In Lucas’ mind all appears to be going beautifully. He delivers a faux emotional eulogy of the dead girl in front of his entire class and Mr. Butler’s life is temporarily turned upside down. He soon turns the tables on the student after unearthing some video footage at his fathers house. This discovery and the subsequent events really lead to Lucas having a complete mental breakdown. He’s expelled, a fact that leaves him stunned, and with academic excellence as his sole purpose in life, he ends up murdering Butler’s wife and kidnapping his infant son. There’s a final semi-dramatic showdown in the class room before the psychotic young student is apprehended.

In the end, Dismissed isn’t going to be winning any awards for excellence, nor should it. It’s a pretty bog standard horror affair with one noteworthy performance. It’s a direct to video film and as such I won’t be too harsh on it. It’s not the worst I’ve seen, not by a long stretch. Would I recommend giving it a watch though? Well, it’s only around 120 minutes long and for the Dylan Sprouse performance alone I’d probably say yes.