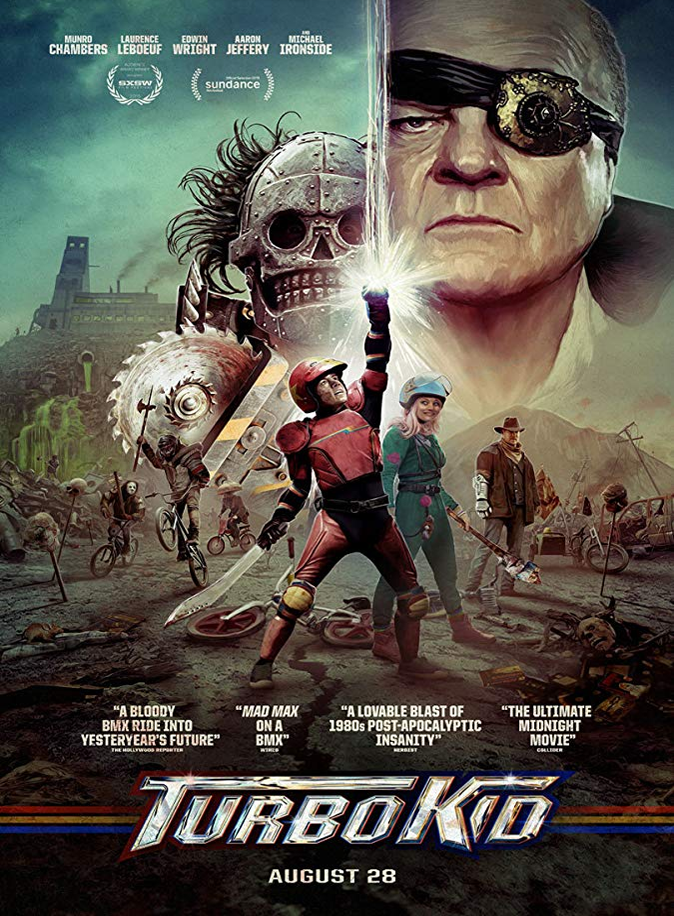 Plot:  In a post-apocalyptic wasteland in 1997, a comic book fan adopts the persona of his favourite hero to save his enthusiastic friend and fight a tyrannical overlord.

Why I Watched It: I wasn’t sure about the film, on one hand I had heard decent genre buzz but the trailer left me not sure and it had 3 directors.

Random Thoughts: So yes three directors and this was a Canada+ New Zealand co-production. Many times filmmakers get the idea to do a retro movie, the idea is solid but hard to pull off cause they’re not trying to do a period piece they’re trying to get a tone and a feel from a different way of filmmaker.  I’ve seen so many movie try to be a cheesy 50′s monster movie and it just ends up being cheap and unfunny.

What I liked: Many times you hear something is an instant cult classic and you just roll your eyes cause classic and instant can’t go to together.  Genre fans and critics tend to get excited easily, everyone wants to find the next hidden cult film and I will say good lordy I think Turbo Kid is a cult movie for sure and it should get a following and they pulled it off by being fun and charming and insane.

First off hats off to them doing practical effects, the gore is so much more fun and it does go back to the 80′s, to not use CGI really does help the feel and the tone of the film, you were never taken out of the film cause you’re just sitting there smiling at the insanity of it all.  The other thing is even with three directors this is a well directed and paced film all of them had to be on the same page you never got the sense of different tones this wasn’t a film that was fighting itself this was a very well told story by filmmakers who knew not only what story they wanted to tell but how they told it.

The reason the film works is the casting here, I hadn’t really seen Chambers or Leboeuf before but both were really good and I think Leboeuf was a huge future ahead of her, she has real good comic timing and she’s quirky to stand out but just plain likeable, Chambers as well very likeable and neither camped it up they played this straight and it worked real well they fleshed out characters in a very strange film.  Aaron Jeffery at first seemed bland to me but the more he was in it the more he seemed charming and by the end I liked his character.  I think it was a clever twist to have the Chambers character and the Jeffery character in the same film cause they’re both kind of apocalyptic movie arch types, we kind of got two leads.  Now the best for last an actor who takes the movie to another level the amazing Michael Ironside, being a Canadian I’ve seen him since I was a kid and the guy has never given a bad performance, he’s a great actor and maybe one of the best genre actors working today, go to IMDB and just seem all his genre titles and here he doesn’t camp it up he plays a very good bad guy here, you kind of like him, Ironside has that great ability to be very watchable even though you hope his character dies soon.

The story moves very well, they do their world building fast, we get a sense of the world and it does really feel like an 80′s movie but it’s not campy it’s well done, and even though you can tell they didn’t have a lot of money it never hurts the film is like they had the right amount of money for the story they wanted to tell.  Also you good tell the directors liked this kind of film they weren’t doing it has a rip off but more of an homage.

What I Didn’t Like: Not much, that’s nice to say ever once in awhile.  Sure it looked cheap at times and sure some of the supporting actors weren’t great but all of that is part of the film’s charm.  This is the type of film where genre fans will love it warts and all and other will just say they don’t get it, not there cup of tea and I get it, but for me there isn’t much wrong with this crazy film.

Final Thoughts: If you even remotely think you might like this or this is in your wheelhouse please give it a watch it’s a charming and fun little romp and truly they don’t make movies like this anymore.