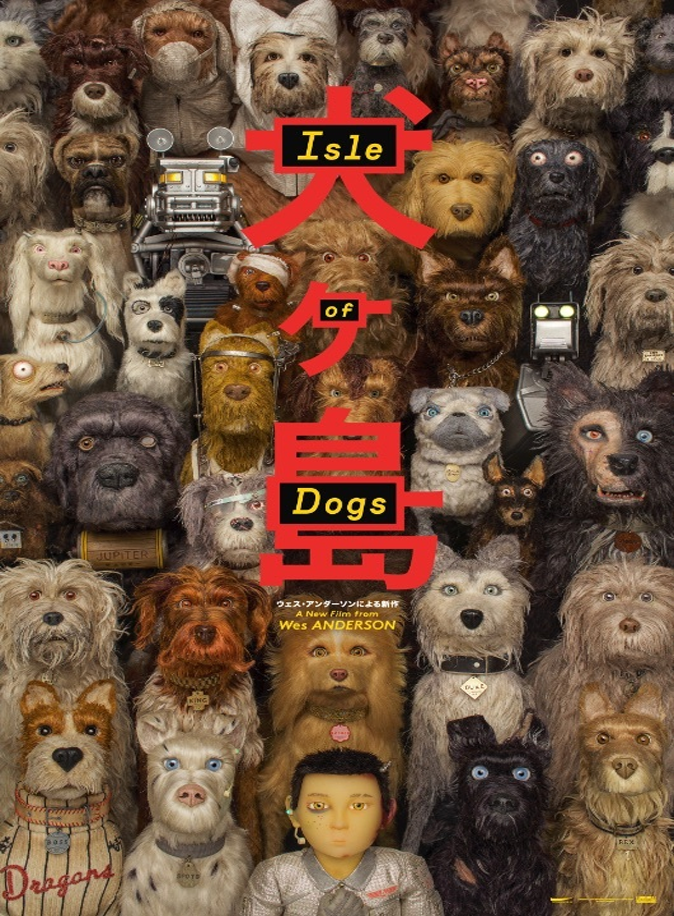 So I finally got round to watching Isle of Dogs last Monday, just a few days after watching Infinity War and I think it would be fair to say those are two rather different cinematic experiences. One had a packed theatre, the other had nine people. Wes Anderson is a very different, very quirky director though. He’s a marmite director in truth. But I love the man and his films. He’s a perfectionist with a very off-beat, dry sense of humour and an appreciation for detail that is mind blowing.

He also knows how to make a damn good stop-motion film and it’s this animated art form that he’s returned to once again for this particularly, out there release. There’s a plethora of adjectives I could use to describe Isle of Dogs, but in truth none of them would do it justice. I mean, you know a film is going to be full to the brim with quirky goodness when within the opening five minutes or so, “all barks have been rendered into english” flashes across the screen.

It takes place in the fictional Japanese city of Megasaki and it’s greater territories; in a rather depressing, near future, dystopian landscape where dogs aren’t having a good time of it. A canine (snout) flu has broken out and corrupt mayor, Kobayashi (Kunichi Nomura), has taken the faux regrettable decision of relocating the entire dog population to Trash Island. Which is exactly how you’d imagine it be. I.e. an abandoned, isolated island that’s full of trash with a rumoured band of aboriginal, cannibalistic dogs roaming around.

First up to try the new locale is Spots (Liev Schreiber), the beloved guard dog and pet of the mayors young, distant nephew Atari (Koyu Rankin). We see him plopping down on the island, looking bemused at his surroundings and then the film jumps forward in time to introduce the self titled “pack of scary, indestructible alpha dogs” that will guide and befriend our young human protagonist for much of the film. There’s Chief (Bryan Cranston); Rex (Edward Norton); King (Bob Balaban); Boss (Bill Murray) and completing the quintet is Duke (Jeff Goldblum).

Each of them have their own mini backstory, fall from grace or rise to prominence and distinctly unique personalities. Four of them had happily co-existed with humans prior to the flu outbreak, but the quasi leader of the group Chief is an ex-stray with a propensity for fighting and a unfathomable urge to bite. It’s Chief’s arc that sees the most development throughout, his story that’s the most heartfelt and touching, as he eyes romance with Nutmeg (Scarlett Johansson), an alluring ex-showdog and gradually develops a close bond with Atari.

Now, one of the big positives I took away from Isle of Dogs, was that it had an intelligent, multi-perspective plot. It primarily follows the ragtag group of dogs as they journey across the desolate, other worldly and yet beautiful looking ‘Trash Island’ with the strange, young boy that’s entered their midst. It also follows the corrupt mayor, who incidentally is a proxy for a secret dog hating, syndicate and plans to exterminate the dogs; not to mention Tracy Walker (Greta Gerwig), a young foreign exchange student with an insatiable lust for conspiracy theories.

There’s also several well worked flashbacks that add depth and context to everything unfolding, certainly Spots six month existence on the island, and all these threads just weave together beautifully.

The voice acting was simply stellar and the casting was perfect. The majority of the human characters spoke in Japanese, their words translated in the main by Frances McDormand’s interpreter character. She was decent enough. Great Gerwig was brilliant as the young Tracy Walker, but the decision to have that character essentially school the natives, head up the pro-dog group and unearth the huge conspiracy felt like perhaps the only misstep Anderson took with this film. I can already hear the cries of cultural appropriation. Even still, I appreciated the heavy use of Japanese throughout and I thought he did respect the culture.

Now for the dogs. Jesus, these are some of the best voice acted animals I’ve ever seen put to screen. Bryan Cranston was the real standout as Chief. As I said previously, his character had the most development and the great man utilised that dulcet voice of his to perfection. I loved the others too, don’t get me wrong, but they frankly weren’t as vital to the plot. They bickered in the main, but were brought to life beautifully by the actors. Jeff Goldblum’s Duke was a living breathing rumour mill, gossiping throughout to hilarious effect. Honourable mentions too to Scarlet Johansson, Liev Schreiber and Harvey Keitel.

The visuals in this film were absolutely gorgeous. I’ve long been an admirer of stop-motion animations and this a fantastic addition to the many I’ve seen.

The juxtaposition of stop-motion and traditional cartoon was cool, it felt like the cartoons could’ve been a homage of sorts to Japanese anime, but I’m not totally certain of that. The attention to detail was astonishing. The placement of trash on the island, that incredible sushi scene, a kidney transplant, the dogs in general and the cotton wool used to mimick dust plume during the myriad of scraps, with limbs popping out at different intervals. The tiniest of details where highlighted and felt important. Even the short little bursts of translations that flashed across the screen on the regular. It was just complete artistry.

Much of this was down in part to cinematographer Tristan Oliver too, who’s worked with Anderson previously. He’s well acquainted with stop-motion and it shows because he did a tremendous job.

Alexandre Desplat returns to work with Anderson again on the score. It’s his fourth collaboration with the director. The Frenchman picked up his first Oscar for the Grand Budapest Hotel and he’s struck gold again. It’s a homage to both Japanese culture and Akira Kurosawa. The use of Taiko drumming was prominent. There was distinctive humming used in the films more foreboding moments and a more uplifting whistle worked into upbeat, happier instances. It was a fantastic score, as you’d expect from the man.

Isle of Dogs caught my eye after its showing at the Berlin Film Festival. I was always going to go and see this because I loved the quirkiness of it, the stop-motion and I’m just a dog person in general. It had a captivating story, with an array of interesting characters, great humour and it was visually stunning. It did what all good animated films should do, which is connect with a mixture of age demographics. It had a simplistic base story of searching for Spots and a deeper exploration of empathy and political satire.

I absolutely recommend this to anybody who loves a stop-motion animated film. It’s a highly entertaining watch and relatively short affair at 101 minutes.