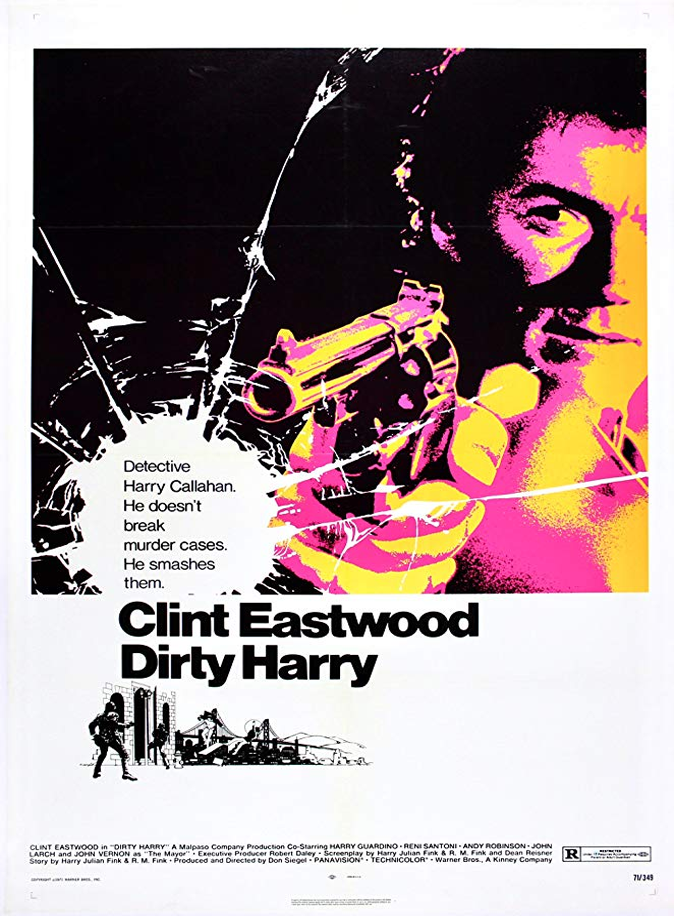 I think it would be fair to say that Harry Callaghan has became a towering, legendary, cinematic figure over the last forty years. He is, of course, the leading protagonist of the five film franchise that followed the brilliant Dirty Harry. Having the equally legendary, perfectly cast, Clint Eastwood playing the man certainly didn’t hurt. I’ve seen all of the films umpteen times since I was a boy, I own the blu-ray boxset and whilst they’re all undeniably enjoyable in their own unique ways, it’s the first that holds a particularly special place in my heart.

It was a firm favourite of my late grandfathers, my mother and just about every close relative in my family. There’s a reason for that too. It’s got that magnetism about it, a certain rewatchability, that all of the classic films have. I can’t even put my finger on what or why that is, but I think it’s largely down to Eastwood, the very decent supporting cast and the whole melting pot of 70s goodness coming together to produce magic. There’s something about the combination of that decade and the crime/cop genre that just works.

Even the bloody score is a standout that definitely adds to the experience. That’s maybe a stupid thing to say, that’s what it’s supposed to do, but it’s got that distinctive, funky style that personified that decade and I can point out the film by just hearing a bit of it playing away in the background.

Plot wise, it doesn’t get much simpler really. It follows Harry Callaghan as he attempts to pinpoint the identity of a rooftop shooter that’s menacing the city of San Francisco. He’s also kidnapped and locked a young woman in a secretive, hidden location. The killer is using the alias Scorpio, but when Harry gets involved, faced with a race against time to save her, it doesn’t take long for the weasels true identity to be revealed. When it becomes clear the young lady has died, all hell breaks loose, with Harry initially stalking and then later pursuing the nutjob throughout an intense school bus hijacking.

Incidentally, Andrew Robinson is absolutely outstanding as the crazed killer too. He plays Scorpio perfectly, imbuing the character with all the quirky oddness and pent up rage that you’d expect. He’s a man that will go to any length necessary to succeed, including paying for a horrific beating at the hands of, I presume, ‘Big Black Man’ (Raymond Johnson), to get Callaghan off his tail. He makes the ultimate mistake of prodding an equally no nonsense cop that’s willing to match him step for bloody step in the violence and stakes department to mete our justice.

What can you say about Clint that’s not already been said? He’s had many an iconic role, including the Spaghetti Western’s ‘Man with No Name’. For me though, it’s Harry Callaghan that I immediately think of when his name comes up. He’s perfectly matched for the role. He’s got the witty sarcasm, the strait edged, talking and aggression when needed and that rebellious, no nonsense aura. More importantly though, there’s humanity underneath it all, he might not show it for the most part, but it’s there and it’s that trait which separates him from the crooks he’s pitted against. Callaghan often blurs the lines of the law, but he’s morally good.

That’s my most favourite parts of Dirty Harry, incidentally. Sure, the plot is simplistic, the premise is/was over saturated, certainly in the 70s, but what makes this film stand out from the rest is the characters, the realness of them, the authenticity they bring and the grittiness of the story.

The snappy, memorable dialogue plays a part too. I mean, who can ever forget the “You’ve got to ask yourself a question. Do I feel lucky? Well do ya, punk?” and the extended speech that precedes it. Then there’s the conflict of bureaucracy between Harry, his Chief and the Mayor. The inner guilt and mild torment he faces with his partners meeting sticky ends, because of his gung ho, grab the bull by the horns, policing style and reputation. The Scorpio killer is a part of that too. He’s an authentic, crazy, very memorable character that adds a tremendous amount to the experience.

I don’t think there’s another cop franchise from that period in time which touches this one and it’s for those very reasons. The others are far too corny, too light in tone by my admittedly biased comparison. More importantly though, they don’t have Eastwood.

Don Siegel was a fantastic director that had worked with Clint on several films, including Escape From Alacatraz and Coogan’s Bluff, likewise the cinematographer, Bruce Surtees. They certainly created magic here, producing an absolute cinematic classic in every sense of the word. It’s well shot, with some visually iconic moments; well edited; features a great and catchy, funky score; the acting across the board is on point; the characters are genuinely interesting, and then finally; the plot, whilst simplistic, is riveting and flows well.

This is one of my all-time favourite Eastwood films and if you’ve somehow not seen it then get it watched immediately and not a moment longer.