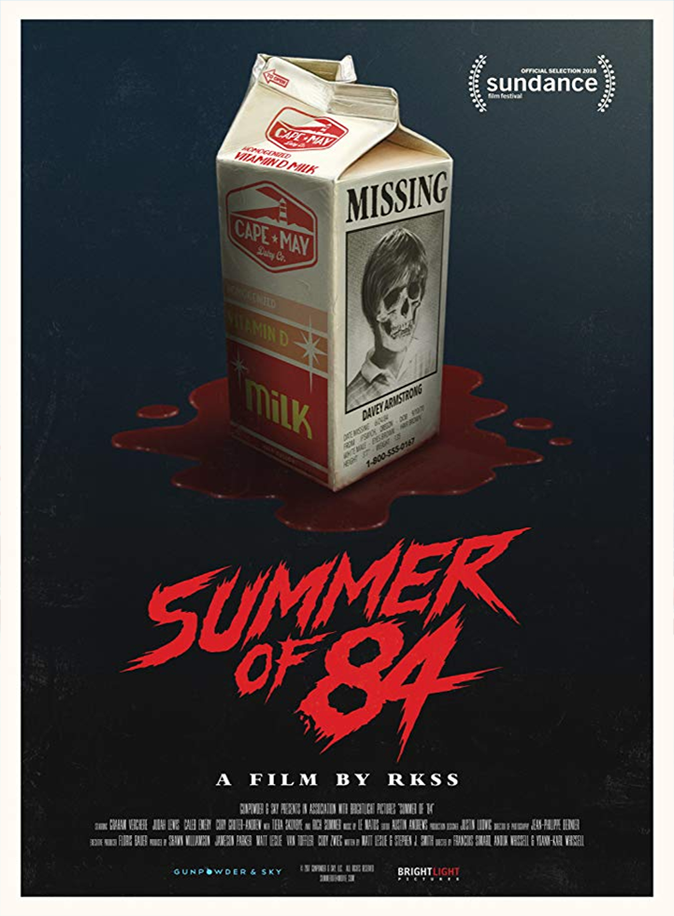 So with the huge success of Stranger Things on TV and the remake of Stephen King’s IT doing historic things at the box office, I suppose it was inevitable that we were going to get imitators of this formula.

So in Summer of 84 we’ve got a bunch of misfit kids who wouldn’t seem out of place in any King novel; the nerd, the fat kid, the broken-home kid, and our main character, Davey, who’s obsessed with all things weird and supernatural (as well as his sexy next door neighbour). After spotting several suspicious things on his paper route, Davey begins to suspect the cop who lives down the block is actually a serial killer. So along with his friends, he sets out to prove his theory right.

We’ve all seen this kind of film before, so you think you’re on pretty familiar ground, and then the third act happens and you find out you weren’t actually watching the sort of movie you thought you were. The finale of this movie plays with your expectations and subverts them to maximum effect. To say more would be to spoil it, but I will say this movie doesn’t end like any other movie in this genre that I’ve ever seen. For some that change of tone may be jarring, but for me it just made me reappraise what had come before and concede that I’d been duped in the best possible way.

The plot is as old as Rear Window, but the film that it reminded me of most was Joe Dante’s The ‘Burbs, and I don’t think I’m imagining it. At one point the police release the name of a suspect in the killings on TV, and his name is Ray Peterson. Tom Hanks’s character in The ‘Burbs is called Ray Peterson. Coincidence? I don’t think so.

The directors keep the suspense bubbling along nicely, substituting the usual 21st century jump-scares with real old-school tension – there’s a scene in a basement that is a masterclass in upping the fear stakes. The writing is natural and honest, and the love story sub-plot serves to lighten the mood every once in a while. The cast are all unknown to me but excel in their roles, with the boys ribbing on each other like the young leads in Stand By Me. The score pays homage to Carpenter, Tangerine Dream, and lots of other synth-driven horror soundtracks from the 80s and sets the scene perfectly.

A horror connoisseur looking for something a little different inside a familiar wrapper will find much to enjoy here, and though the ending doesn’t provide that ‘everything tied up nicely’ closuresome people crave, I suspect most people will forgive that, because this is a creepy movie that stays with you when you turn out the lights.