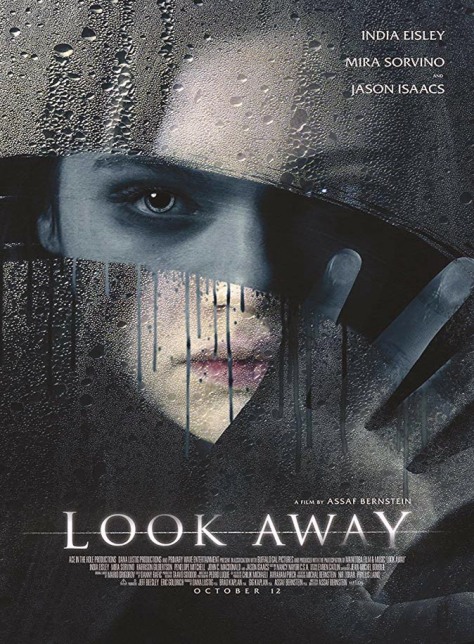 I’m everywhere where you are. Whenever you see yourself, what you really see is me.

There are large numbers of films in which mirrors play a crucial role. Just think of “Mirrors“, “Oculus” and “Candyman“. And when someone is standing in front of a mirror in a horror movie, you can be sure there’s something frightening behind him or her when the camera focuses back on that mirror. One of the many tricks that makers of horror films use. And when they properly apply this gimmick, you’ll be avoiding every mirror the next days. But what if your reflection suddenly begins to speak to you and offers you a way out of a hopeless situation you can’t handle anymore? Well, that’s what Maria (India Eisley) is experiencing. Maria’s alter ego Airam (I thought it was smart how they reversed her name. As a mirror image) proposes to switch sides, to put Maria’s adolescent life on the right track again.
Maria’s life isn’t exactly rosy.

She’s an insecure and frightened little gray mouse. Although she has wealthy parents and radiates a natural beauty, she’s not exactly the happiest person at home. She doesn’t eat, looks pale and in a certain way unkempt. And confidence isn’t her strongest point. The cause is primarily due to her parents, Dan (Jason Isaacs) and Amy (Mira Sorvino). Dan is a successful surgeon who immediately notices any deviation on the scale of aesthetic beauty.

Perfectionism is his dada. A terrible person whose disparaging remarks clearly have an impact on his daughter. When he offers some surgery as a gift for Maria’s 18th birthday, you can see Maria’s self-confidence slip away. And Maria’s mother isn’t exactly the person to restore this confidence. Amy is a woman who lives in denial and resolutely refuses to see that “being faithful in a marriage” isn’t a priority for her husband.

And Maria’s school-time isn’t really pleasant either. She’s treated like a pariah. And of course, once again there’s such an annoying smartass who’s bullying her constantly (but well-known folk wisdom says: “Teasing girls, is asking for love”). Her circle of friends is also rather limited. Only Lily (Penelope Mitchell) seems to be a soul mate. Ultimately, this friendship appears to be superficial. In short, Maria’s social network is not really extensive. And despite her rich parents and appearance, social acceptance is nil. So, she doesn’t belong to the favourite girls’ club as known at American colleges. That’s why Mary’s alter ego is only too happy to take over her day-to-day life in such a way that she could correct these worries and injustices.
Despite the fact that “Look Away” has many points of contact with existing films and you cannot really call it innovative, I thought it was a fascinating film that kept my attention. The interaction between the two doppelgangers through the mirror is fascinating to see.

That the story gets a “Carrie” -like touch after Airam takes matters into her own hands, was of course extremely predictable. However, don’t expect bloody situations. For that, the film is more a thriller than a horror. The only thing that can cause any suspense is the mystery of the bizarre ultrasound picture at the beginning of the film. That provides the necessary guesswork. Is a supernatural entity involved? An evil twin sister? Or is Mary mentally derailed after she discovered this picture? Is it a case of split personality? Well, the denouement won’t make you any wiser. And unfortunately, this ending was no surprise either. “Look away” has some great scenes. Maybe you shouldn’t look away when you come across it and give the film a chance.