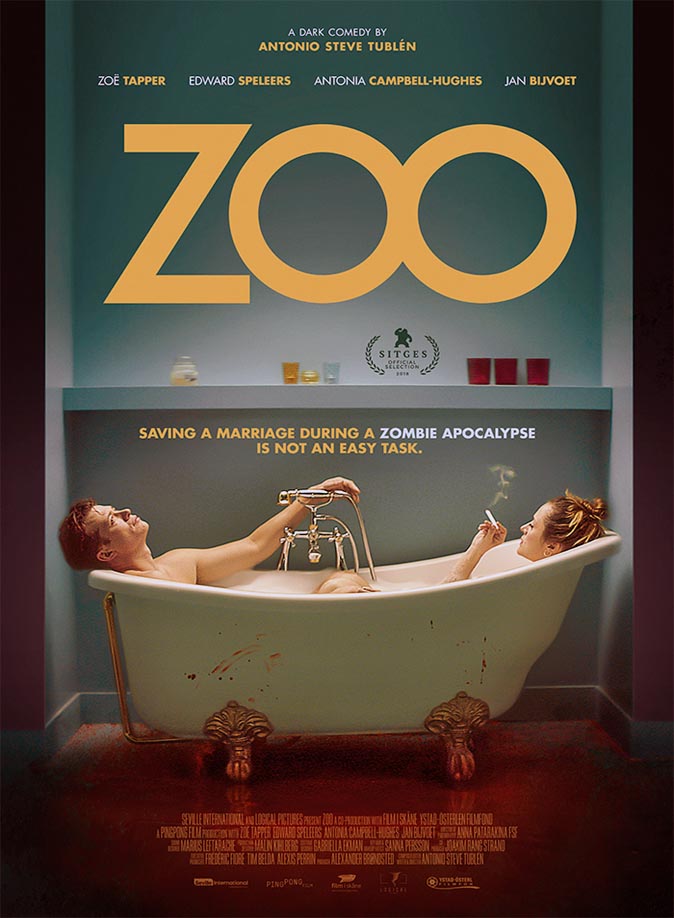 Admit it, the zombie horror genre has been thoroughly milked in recent years. Last years the market is flooded with films in which a global epidemic causes the rise of a maddened mob of bloodthirsty, mindless people who just want to sink their teeth in a juicy piece of human flesh. The majority of releases are also terribly bad and full of unoriginal clichés. But once in a while, you’ll also find quirky attempts that try to give an original twist to a well-known theme. Like this Swedish production “Zoo” (don’t confuse it with the adventure film in which a young boy and an elephant steal the show) which tries to mix comedy and drama with the zombie genre. Even though I’m not in favour of a mix of comedy and horror, I could appreciate the black humour here. The film immediately reminded me of “La Nuit a dévoré le Monde” where they also put more emphasis on the person who’s trying to survive the Apocalypse than the Apocalypse itself.

In “Zoo” Karen (Zoë Tapper) and John (Ed Speleers) are the ones whose lives are being shaken up. A pregnancy that has gone wrong has already ensured that they don’t get along so good anymore. Karen has withdrawn deeper and deeper into her shell where she is consumed by grief and reproach. John throws himself into his work. And before they realize it, they live alongside each other, there’s no longer any question of affection and Karen has gathered a lot of moving boxes already. In short, their marriage is falling apart. Were it not that a rapidly spreading virus starts to mess up society big time. Just like their marriage, society is gradually collapsing. And the only thing the authority’s advice is to stay inside and keep yourself busy with something.

And that’s what they do. They watch old films on VHS. Do exercises to keep fit and to defend themselves in case a few infected guys try to smash their door. But mainly the couple grows closer to each other and discover their lost love again. Maybe the supply of drugs Karen has hidden in a cupboard has something to do with it. In any case, everything seems like peace and light again. For a moment anyway. The interaction between Zoë Tapper and Ed Speleers never felt artificial. It was as if they were a couple in real life.

As I mentioned earlier, “Zoo” is a mix of drama, humour, and horror. Although the horror part is gently slumbering in the background. Every once in a while, you get to see some hysterical looking aggressors who throw themselves at every audible sound. But these fragments are so scarce that after a while the horror element is forgotten. The first part is both engaging and moving. Until the neighbours show up and the comical side prevails. Without a doubt the better part of the film. The second part is more tragic and fairly intense. The ultimate message is a confirmation of their wedding promise. And I’m talking about the “for better or for worse” part. “Zoo” is certainly not suitable for a seasoned horror fan. I’m sure horror fans will be disappointed and get bored while watching it. And finally, an important warning. This film has the alternative title “Death do us part “. But you should certainly not confuse this with the film of the same name from the year 2014. Because that’s really a monstrosity of a movie.