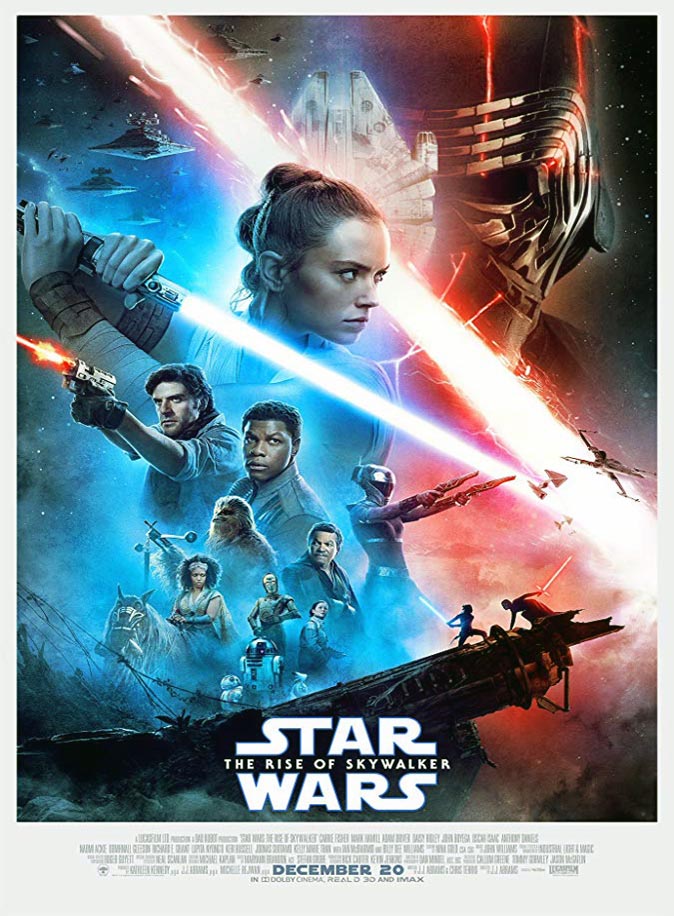 JJ Abrams is tasked with the unenviable task of trying to bring the most beloved franchise in history to a conclusion and satisfy the millions of fans worldwide. Of course that’s impossible. You only have to look at individual ‘rank the Star Wars films in order of greatness’ lists online to see that everyone has very different ideas about what makes a great Star Wars film. From what I can glean, how you rate these films has a lot to do with which film introduced you to the magic of George Lucas’s galaxy. Believe it or not, there is great love for even the worst of the prequels out there from people who walked into a movie theatre for the first time in 1999 and never wanted to leave.

So this film isn’t going to please everyone. That’s a given. But I saw it at the midnight screening with a bunch of hardcore fans and heard nothing but excited praise as I left the cinema. We all loved it. And that ranged from golden oldies to kids who should’ve been in bed, but would probably always thank their parents for making this exception.

I’m not going to get into the specifics of the story, because I don’t want to spoil anything for genuine fans who are excited for this movie, so I’ll only touch on things that the trailer has already revealed and try to address some of the dumber criticisms I’ve seen in the negative reviews.

So the Emperor is back, or to be more precise, he never really went away, and it’s up to our heroes to end the Sith leader once and for all before his latest deadly plan for mass destruction comes to fruition. This film hits the ground running and barely pauses for breath the whole way through. It’s a race against time and there’s a lot of ground to cover.

In short, a lot of stuff happens during this film and it’s a lot to unpack after you’ve seen it. If I have one criticism it’s that this film tries to cram two films into one, but I believe, for the most part, it succeeds in doing just that. The reason it needs to do this is the old elephant in the room… The Last Jedi.

TLJ has its supporters, but I’m firmly in the camp that thinks it’s a complete disaster – a square peg trying to fit into a round hole – and Rian Johnson’s refusal to pick up the story strands laid down by Lawrence Kasdan and JJ Abrams in The Force Awakens is the reason TRoS has to spend a certain amount of time setting things straight again.

JJ and Co. are towing the party line at the minute while doing press saying what a ‘great job’ Rian Johnson did, but you only have to look at how much backtracking there is in this movie to see that Mr Abrams was not happy with the direction of Episode VIII. In fact I’d go so far as to say there are several occasions in TRoS where JJ raises a very definite middle finger to some of the terrible ideas Rian Johnson had.

So if it seems rushed in places, blame Johnson for not running with ideas like The Knights of Ren. Kylo’s hand-picked henchmen are in this movie, but I can’t help thinking if they’d been established in Ep8 like they were supposed to be, their presence would have much more weight. We also see Rey training in the trailer – this is something else that should’ve happened in Ep8 if Johnson hadn’t made some awful decisions about changing Luke’s character.

The Last Jedi really does stick out like the haemorrhoid I always believed it to be after seeing TRoS. It’s just terribly written. You notice the great friendship and banter between Finn and Poe in Ep7, and then it disappears in Ep8, and then it’s back in Ep9. These inconsistencies are what really bother me about Rian Johnson’s attempt at a SW film.

The defence I always hear is that he ‘tried something different. Where? All he did was insert misjudged humour, ignore the personalities of already established characters, and craft a film that spends two and a half hours treading water; there are no character arcs and the story barely moves – everyone’s in exactly the same place at the end of the movie as they are at the beginning. It’s a pointless film, and after seeing Ep9 I think it’s safe to say that if you watch the whole saga now, and skip Ep8, you haven’t missed anything important to the story. I will eternally love Ep9 for giving me that.

Ep9 takes more chances and has more twists than TLJ ever did. There are some genuine jaw-dropping moments that side-swiped me and the rest of the hardcore fans I was watching with. There are of course moments of fan-service that hail back to the other films, but I didn’t mind these at all, and given the looks of glee on the faces all around me, no one else did either. It’s fan service, but it’s fan service done properly.

I’ve read some of the spoiler-heavy negative reviews out there and I disagree with most of them. People who say this or that doesn’t make sense, either don’t know Star Wars very well, or they just know their YouTube video will get more clicks if they say something nasty. It’s a sad state of affairs that SW bashing has become the norm online. I could answer every single criticism I’ve seen online and tear their argument to shreds, so I don’t take any of these negative reviews too seriously. They’re obviously written by very casual viewers (no, I’m not even going to call them fans). I hope the box office will tell a different story because this is a thrill-packed ending to the Skywalker saga and will please any real fans of this galaxy far, far away…

If The Last Jedi destroyed your faith in Star Wars, come back and see The Rise of Skywalker and give it a chance to make you a believer again. Our heroes have all got their personalities back and the worst decisions of TLJ are backtracked and glossed over. It makes TLJ a pretty inconsequential film now.

Will it please everyone? Of course not, but I for one I’m glad this film exists and I think Abrams and Terrio did an excellent job pulling this sequel trilogy back from the brink. While not every plot strand or character arc is resolved to satisfaction, they concentrate on the main thrust of the story and follow it through brilliantly. As a writer myself, I know there just isn’t enough time to walk us through everyone’s epilogue – there’s just too many characters. You would end up with the 15 endings everyone complained about in Return of the King.

This is Star Wars back to how it should be; fun, exciting and full of drama and emotion. The final battle is on a scale never seen before and the twists and turns will slap a smile on the face of real fans that it will be hard to shift. Given the drag factor of TLJ, it’s as good an ending as we could’ve hoped for, and one I will rewatch many more times.

The force will be with me, always.