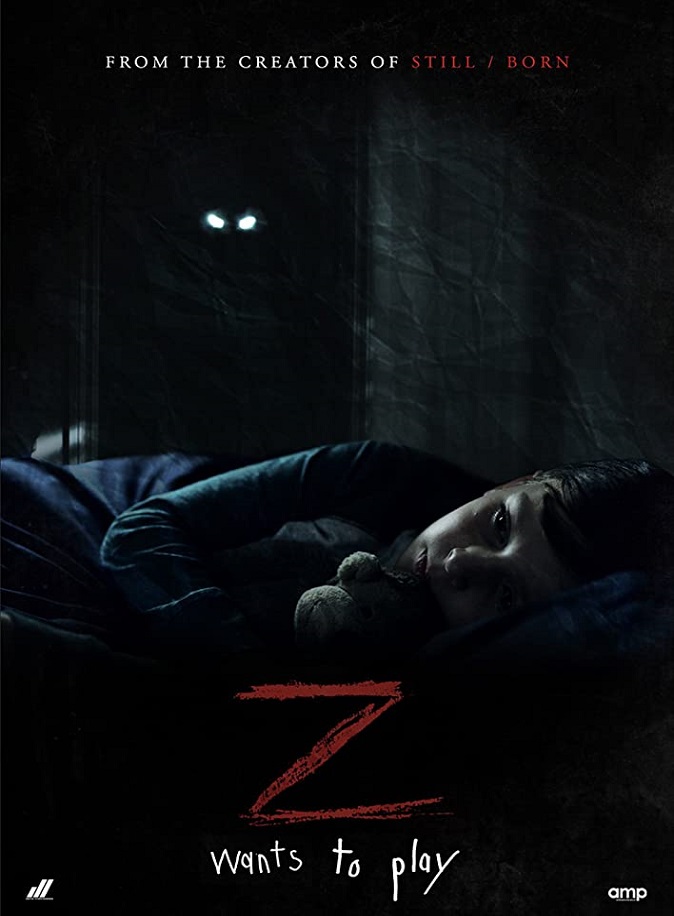 Movies with creepy little boys. With “Z” you also have the feeling you are getting yet another horror in which such a demonic boy is in command. Only recently I see “The Prodigy” where the son of the house slowly develops a deviating pattern of behavior. That movie was about reincarnation. In “Z” it’s about having an imaginary friend. When Joshua Parsons (Jett Klyne) introduces his friend “Z” to his parents, they don’t really worry at first. They think it’s probably just a phase their kid has to struggle through. They even think it’s cute, in a certain way. Until suddenly school friends don’t want anything to do with Josh anymore, Elizabeth (Keegan Connor Tracy) becomes aware of strange things and finally, Joshua is also suspended from school because of intolerable behavior. At that moment, Elizabeth starts to realize that this imaginary friend has a tremendous influence on her sweet son.

Until halfway through the film it seems like an ordinary average horror. Including, something terrible happening to one of Joshua’s school friends (with or without Z’s collaboration) and Joshua revealing a horrible drawing in his bedroom. Believe me. Draw a black top hat on the head of this scary creature and you have the twin brother of “The Babadook” in front of you. Now is the time for Elizabeth to sound the alarm, while dad Kevin (Sean Rogerson) is still in a phase of denial and suffers from utter blindness, and get in touch with psychologist Dr. Seager (Stephen McHattie) to present the problem. The well-known tricks from the horror genre are being used in “Z” of course. So again the shady spots with scary sounds. Toys that come to life. And nocturnal wanderings through the semi-darkness (while every sensible person would turn on the light anyway) with a few jump-scares as a result. Even a creepy bath scene couldn’t fail to come.

And yet the film cleverly changes the mood and shifts the focus from a scary invisible friend to a long-forgotten childhood trauma that set the whole mechanism in motion. And before you realize it, the creepy horror story has given way to a sort of psychological thriller. From here, Joshua is no longer central, but the story focuses on Elizabeth. And frankly, the way Keegan Connor Tracy gives shape to this character was of exceptionally high level. An obviously confused person who slowly but surely sinks further into complete madness as a tormented soul. The father’s character contrasts sharply with that of his family members. In the end, I found it a meaningless person and quite implausible as a father figure. On the one hand, he said nothing about the red notes from school that exposed Joshua’s misconduct. On the other hand, he’s blind with anger when hearing that his son has been prescribed medication without his knowledge. Ah, as always in horror movies, it’s usually the fathers who navigate through the story carefree and never notice anything suspicious. It’s usually the mother figure who experiences strange sensations and concludes that disaster is imminent.

I can’t say the film “Z” was really scary. Maybe deliberately not depicting the phenomenon “Z” explicitly, does cause some tension. A cleverly applied gimmick so the viewer’s imagination has to do most of the work (with a terrifying wall drawing as inspiration). Ultimately, it’s mainly the mood that’s essential in this film. In hindsight, the film covers different topics. Youthful growing pains and parental concerns. Nightmarish phantoms and unresolved trauma. As a parent, you expect your offspring to inherit some of your character traits or personal qualities. However, in “Z” this legacy is not something you’d expect. And even though this delusion isn’t excessively visualized here, its presence is clearly felt in every dark, grim scene.