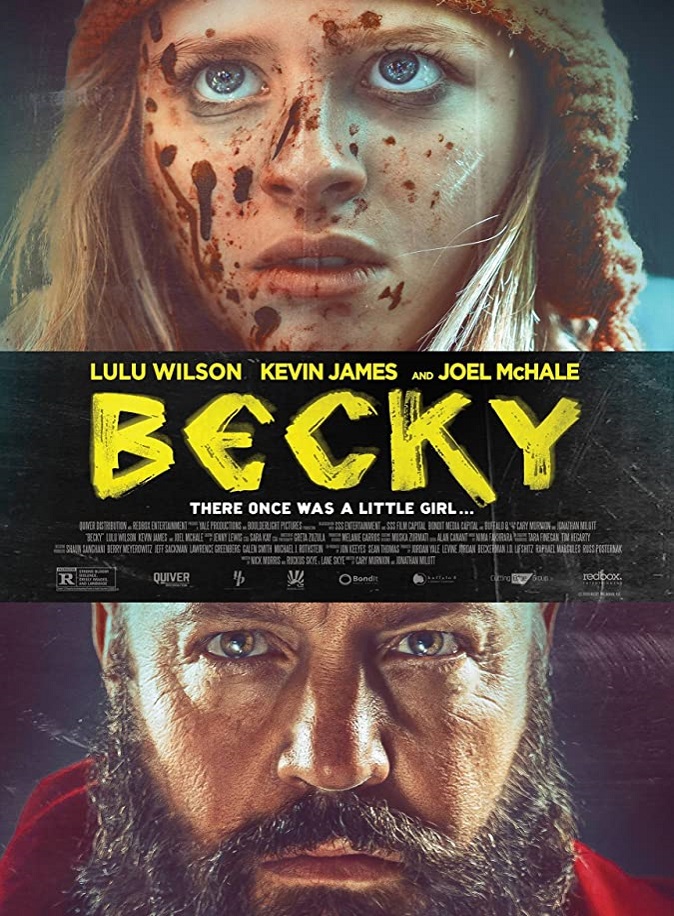 Feel like watching a straightforward “home invasion” film with dangerous-looking thugs (impressive body length, coarse facial features, and imposing tattoos on the back of their bald heads) taking an innocent family hostage? Well, in that case, “Becky” is the right movie for you. As with “Bushwick“, also directed by Jonathan Milott and Cary Murnion, you don’t have to wait long for the violence to erupt. First, there’s a brief introduction of the main characters Becky (Lulu Wilson) and father Jeff (Joel McHale), who wants to spend a weekend with his girlfriend Kayla (Amanda Brugel) and her son Ty (Isaiah Rockcliffe). Subsequently, you’ll see a violent escape from a prisoner transport by Dominick (Kevin James) and his cronies Apex (Robert Maillet), Cole (Ryan McDonald), and Hammond (James McDouglas). And then you can get ready for an hour of unabashed terror and bloody butchery.

Frankly, the film isn’t really inventive and will certainly not stand out among other similar creations. But I have to admit I had a lot of fun watching it. It was a moment of relaxation and a relief for me to forget the Corona crap briefly. Perhaps also because of its simplicity and the straightforward approach this film had to offer. You actually know in advance what the outcome will be. As I mentioned in my review about “Eye for an eye”. You can be certain that the nasty gang members will get the short end of the stick. The movie “Becky” comes with one condition. You have to ignore the fact that a 13-year-old girl is able to wipe the floor with four grown-up guys. In short, if you don’t take this film too seriously, it’s digestible. Otherwise, you’ll only be annoyed by it.

Most notable appearance is of course Kevin James who makes a huge career switch by portraying a relentless neo-Nazi. It took me a while to realize it was the “Kevin Can Wait” actor. Someone who usually appears in light-hearted television shows and belongs in yet another Sandler film. The transformation from an oh-so-cosy, over-friendly (Santa-ish) guy to a chilly, beastly Third Reich supporter (and member of some Brotherhood that defends the Aryan race) with an imposing, shaggy beard, is impressive. Opposite these behemoths (especially the aforementioned Apex) is this skinny thirteen-year-old girl with her pink backpack, glitter-decorated smartphone, and a similar bear hat as Jack wore in “Room”. Not exactly a worthy opponent for these four brutes. But then the aspect of improbability comes into play and the gentlemen realise that they were a bit wrong about this girl.

Yes, “Becky” is a bit of a nonsense movie. The reason why these four idiots terrorise this family also remains a mystery. And what’s the relationship between the gang members? Like Dominick and Apex. Do they have family ties? And is the passing of her mother the only reason why Becky resolutely draws the card of revenge? Or does she have a more sinister past? But despite the lack of character development and substantive explanations, I’d say that “Becky” is an entertaining gory thriller. An adult “Home Alone” version where creative assault weapons are manufactured resulting in painful-looking (A hidden metaphor by coincidence) injuries. It’s not one of the best revenge movies, but also not one of the worst.