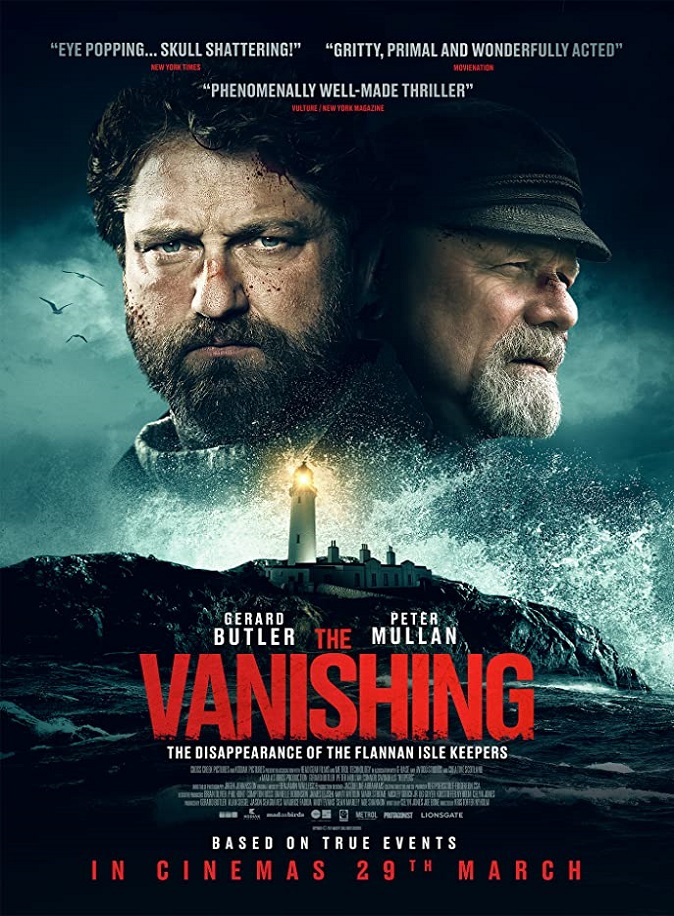 Every now and then I come across a completely unknown film I don’t really expect much from, despite the presence of a well-known sounding name, but which nevertheless pleasantly surprises me. “The Vanishing” is a thriller pur sang. A fictional story about a true event, namely the disappearance of three lighthouse keepers in 1900 who stayed on one of the Flannan islands on the west coast of Scotland. The three men James Ducat (Gerard Butler), Thomas Marshall (Peter Mullan), and Donald MacArthur (Connor Swindells) have never been found. Nobody had a real explanation and soon several speculations circulated. From a giant sea snake to giant seagulls. Or maybe they went up in smoke to start a new life. Kidnapping by spies was also an option. Even an alien kidnapping. This film aims to give a more plausible explanation. But it nevertheless remains an unproven and therefore fictional story.

Don’t expect any supernatural apparition. First of all, “The Vanishing” is a realistic look at the life of a lighthouse keeper at the beginning of the 20th century. The rugged sailor life in which these seasoned sea dogs brave the briny deep unflinchingly as they make their way to that boulder in the middle of the ocean. Something rookie Donald clearly isn’t used to, so he experiences the trip while hanging over the railing. In the largest part of the film, you see how these men dutifully perform their tasks on the island. Not that there’s really a lot to do. The main task is to ensure that the beacon of the lighthouse is working properly and that the glass surrounding it looks optima forma. They spend the rest of their time singing, cooking, sleeping, and strolling around the island. Not really madly exciting.

Until newcomer Donald finds a splintered boat, a lifeless drowned man, and a locked wooden box between the rocks. And when the content of the mysterious box is being revealed, the time has come for tensions to rise. From that moment on, mistrust and greed play a major role. There is such an ominous mood in the air. You get the feeling that every moment the situation will explode and one of the three keepers will erupt into violent anger. But ultimately the three don’t pose a threat to each other, but third parties play a greater role. I won’t reveal too much but expect a serious escalation of the situation at some point.

“The Vanishing” was a relief after seeing so many mediocre and forgettable nonsensical feature films. Not only the footage turns this film into a gem. The acting is also phenomenally beautiful. Not only the oppressive, claustrophobic atmosphere is impressive. There are also some melodramatic moments in which hidden distress comes to the surface, resulting in conversations full of meaningful silences and heavy words. You’ll also witness some lurid scenes such as the cleaning up of dead gulls after a heavy storm (“You may have to break the wings to get ’em in.”). But for me, Gerard Butler was a real eye-opener. He usually appears in one of those a dime a dozen action films (with the exception of a single film like “A family man”). But here he also shows that he knows how to act. Never thought a movie about lighthouse keepers would be worth watching. Well, apparently it is. And that’s also a reason to finally check out “The Lighthouse”! Lights out, lighthouse spotlight on.