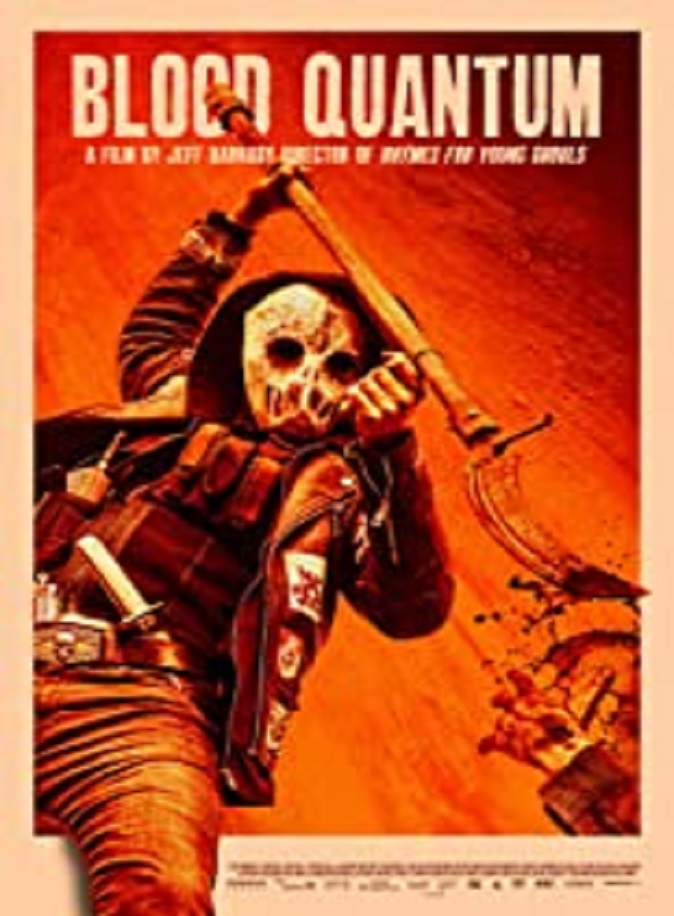 My first thought was that Blood Quantum would be an awesome name for a death metal band and the box art would make an absolutely bitchin’ album cover. But before calling dibs, I looked it up and the term actually refers to the fraction of one’s Native American ancestry. For example, if Mom is Native American but Dad isn’t, you have a blood quantum of 1/2.
Though copping it for my band name would probably reek of cultural appropriation, Blood Quantum is a fitting title for this film…in more ways than one, actually.

Before one assumes this is yet-another zombie flick in an already glutted genre, Blood Quantum adheres to some of the standard tropes while throwing in some nifty creative curveballs. For example, not everyone who gets bitten succumbs to the virus. It turns out the indigenous people of the Red Crow Indian Reservation are actually immune, and it’s suggested that’s due to their harmonious relationship to the Earth. However, they can still be eaten, making them wary of allowing outsiders into their fortified compound. This leads to some not-so-subtle social commentary that would make George A. Romero proud.

I also like how the virus is introduced. Presumably due to pollutants in the water, Gisigu (Stonehorse Lone Goeman) discovers the salmon he caught and gutted won’t stay dead. He brings to the attention of his son, Traylor (Michael Greyeyes), the tribal sheriff. It isn’t long before dead people begin attacking others. Of course, the only way to keep them down is the time-honored tradition of destroying the brain.

Six months later, the world has been overrun by zombies. The Red Crow Reservation appears to be the last safe zone. Traylor allows uninfected outsiders to join the group, much to the chagrin of wild, hot-headed son Lysol (Kiowa Gordon). Meanwhile, his more level-headed other son, Joseph (Forrest Goodluck), has a pregnant white girlfriend, Charlie (Oliviia Scriven). Since she’s not immune, Charlie fears their child won’t be either. In one of the film’s more chilling expositional moments, she shares a recurring nightmare that her unborn child starts eating her from the inside, at which time the viewer is briefly certain this is a horrifying bit of foreshadowing.

While it doesn’t quite go that far, Blood Quantum has plenty o’ gleefully nasty tricks up its sleeve, further-justifying the title. Following a somewhat meandering middle act, the undead eventually threaten the compound, for reasons I wouldn’t dream of giving away (but you probably won’t see coming). I will say that the film doesn’t shy away from unexpectedly offing major characters (some have it coming, many don’t), nor does it spare the brutality of their deaths. Pulling very few punches, the violence is not-only graphic, it’s convincing and sometimes really sick (in a good way), mostly accomplished with good ol’ fashioned practical effects.

Elsewhere, the film is occasionally hampered by a few questionable performances and/or ill-conceived characters. But overall, Blood Quantum is engaging, suspenseful, frequently funny and even thought-provoking, on occasion. If that ain’t enough, in addition to being a great band name, it more-than-earns its stripes by being a gorehound’s wet dream.